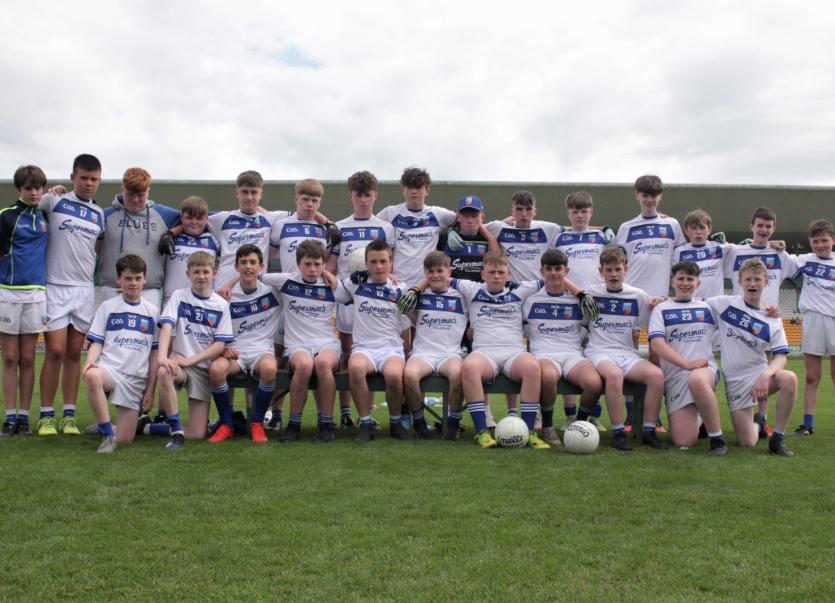 The Tullamore team which won the 2020 U-13 Football Championship with a big win over Na Fianna. Picture: Alex Aubin.

Tullamore were emphatic winners in the U13 ‘A’ Football final as they swept aside Na Fianna in ruthless fashion on Sunday with an impressive display of attacking football.

The game was all but over by half-time, with the Blues in front by 3-13 to 0-1 and looking almost out of sight.

A goal early in the half for Tullamore put them on an even sounder footing and they never looked like losing. To Na Fianna’s credit they battled right to the end and sent over nine points in the remaining 25 minutes or so as they played right to the final whistle.

Mark Holton set the tone early on and an excellent free from out on the wing early on was the first of an impressive display of placed ball shooting from the ground. He also scored a hat-trick of goals over the hour, one direct from a free kick, as he rounded off a memorable weekend in which he also made his debut for Bohemians the day before.

This was an almost complete team performance from Tullamore though, and their defence was equally impressive throughout with William Cronly and Parick Kenna, who carried the ball impressively on a number of occasions, the backbone of a defence in which Keith White also stood out.

Scott McCumiskey and Shane Horkan worked tirelessly to create the platform for the forwards, who at times were spectacular. In an impressive half forward line, Eoin Rouse and Cian Horkan worked well either side of Holton, while Alex Sheridan and Cillian Wynne also shot impressive tallies.

While well outplayed on the day, the Na Fianna side never gave up and made something of a game of it in the second half. Josh Sheeran impressed for them as did Jack Fox, Colm Nolan and Lucas O’Meara. David and Conor Berry both had a big impact on the game when introduced in the first half.

Tullamore were impressive in the opening minutes and really took the game to Na Fianna from the off. As they forced a number of frees, Mark Holton was unerringly accurate as he kicked over two frees from the ground early on, one from out near the sideline. Eoin Rouse then finished a strong run with a point. Two points quickly followed from Alex Sheridan as Tullamore continued to apply the pressure.

Nia Fianna were off the mark with ten minutes played as Josh Sheerin did well to kick over a point while surrounding by several defenders.

But it was all Tullamore after that as Cillian Wynne added a point before two further frees from Mark Holton.

Tullamore were in for their first goal with just under ten minutes remaining in the half. A strong run from Eoin Rouse started the move before Shane Horkan supplied Cillian Wynne who kicked to the net to put Tullamore 1-9 to 0-1 in front.

Less than a minute later Tullamore were in for their second when Alex Sheridan slipped Mark Holton through on goal and he slotted low to the corner.

The pressure from Tullamore was relentless at this stage and Eoin Rouse added a third goal with a minute left in the half, either side of points from Alex Sheridan and another Holton free.

Tullamore had a commanding lead of 3-12 to 0-1 at the break. Any hopes of a Na Fianna fightback were quickly quashed in the second half when a long range free from Mark Holton sailed all the way to the net and opened up a 24 point lead.

Na Fianna rallied somewhat after that and a pointed free from Edward Mangan was quickly followed by a well taken point from Jack Fox.

Na Fianna enjoyed their best spell at this point and another point followed from Lucas O’Meara before scores from Josh Sheeran and a free from O’Meara.  The only reply from Tullamore in that period was a good point from Jack Kenna after a trademark run up the field from him.

However, with two minutes remaining, Mark Holton completed his hat-trick with another well-taken goal and Eoin Rouse and Charlie Heffernan completed the scoring for Tullamore while in between those points Ronan Hooper sent over a point.

Man of the match: Mark Holton