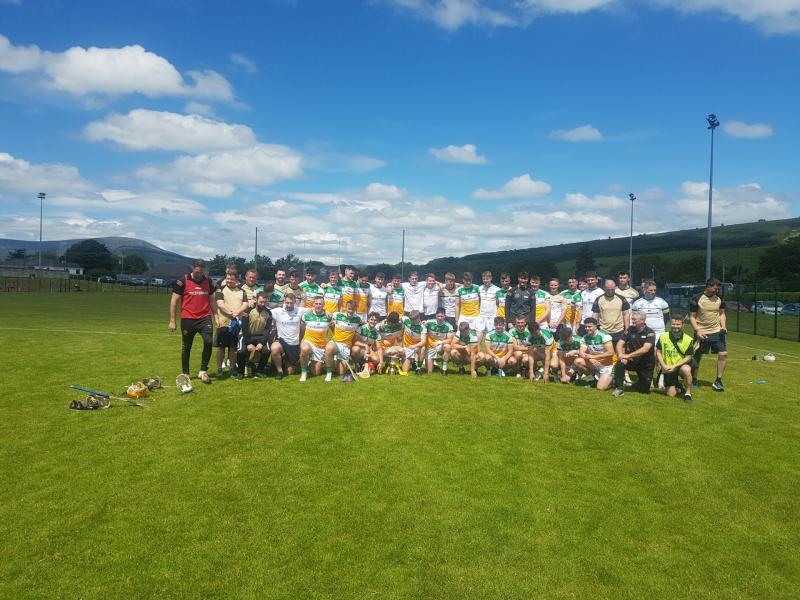 A SECOND string Offaly team showed no mercy as they ran riot to hammer Wicklow in their final National Hurling League Division 2A game in Baltinglass today.

With promotion assured after great wins over Meath, Kerry, Carlow and Down, Offaly fielded an almost completely new team with Joey Keenaghan the only starter from the side that beat Down the previous Sunday.

Any expectations that Offaly would go through the motions proved to be well off the mark as they dismantled Wicklow with a very professional, very efficient performance. They scored at will and considering that there was nothing at stake, they showed a commendable level of hunger. The only holes you could pick in their display was that they only managed one goal but in its own way, that was very commendable as there was no need to completely humiliate a woefully outclassed Wicklow.

There is no doubt that Offaly could have ran in half a dozen of goals if they truly desired. As it was, they should have got at least a couple more but it didn't matter one bit as Offaly had an afternoon of shooting practice.

Michael Fennelly told his players before hand that this was their opportunity to impress, to stake their claim for a role in the Christy Ring Cup and they were certainly listening. They were very good on the day, doing what they liked. The standard of opposition has to be taken into account but Offaly's stick work and intensity levels were sufficiently high.

Team mnagement won't be making any big judgements about players on the basis of this facile win. Some players certainly enhanced their chances of featuring in the Christy Ring Cup, and a couple did themselves harm but management won't be reading a huge amount into the excellent or the average displays. It was that type of game against that type of opposition.

Wicklow just weren't at the races. It is debatable if they were of the standard of a good senior “B” team in Offaly and in many ways, their hurling was more like club intermediate standard. Their hurling was slow and ponderous, their intensity and fitness levels were way off as a unit – and by a country mile in some cases.

Hurling is very much a secondary sport in Wicklow and this showed but Offaly did what they had to do. They hit the ground running, taking control from the throw in and it was clear that the players were eager to impress.

It was obvious from the start that this would be a routine afternoon for Offaly and that it would be all about shooting practice. They were very good in the opening quarter, strolling into an eight point to no score lead after fourteen minutes. They had sixteen points on the board before Wicklow got their first point from Jack Doyle in the 32nd minute and then a John Murphy goal capped off a very acceptable first half display as the winners led by 1-18 to 0-2 at half time.

With Shane Dooley in deadly form from placed balls and Luke O'Connor flying in the corner, the Offaly attack were excellent. O'Connor was a revelation in the first half and he looked like a real poacher, a clinical finisher. He fired over five points from play in the first half, he showed for everything, he was lively and he was efficient on the ball. The St Rynagh's man was quiet in the second half, failing to add to his tally and having a couple of misses that he will be disappointed in. It means that he may not have done enough to win a starting place for the Christy Ring Cup but he is clearly a starting forward for the future and you would never be disappointed to see him coming on in any game at the moment. Management gave him the benefit of a full game and even when it wasn't happening for him, he kept trying to do the right thing.

It was a throw back of sorts for Shane Dooley as he shot the lights out. The veteran Tullamore man got 17 points, three from play and got better and better as the game wore on. While he probably won't start in the championship, the full game will also have served him well as he improves his fitness levels and sharpness. His striking was very impressive, his free taking impressive and he will have an important role to play for Offaly this year.

The second half was routine and Offaly didn't really ease off the throttle, while not truly going for the jugular. They introduced a few players off the bench but resisted throwing in regular first team starters. Of the regulars, only Ben Conneely came on and that was purely because he was the captain and about to receive the Division 2A cup from watching president, Larry McCarthy.

Wicklow were a small bit better and added eight points to their tally but it was all immaterial. Offaly added fourteen points to their margin as they finished off a great league campaign with an all too easy win.

Apart from O'Connor and Dooley, there were others who impressed. Stephen Corcoran dealt capably with anything that came his way in goals while Jordan Quinn enhanced his prospects with a very solid full back display and Joey Keenaghan manned the centre of defence well. John Murphy played his way into the game after a slow start, scoring 1-3, Padraic Guinan showed good touches on the half back line once he settled down and Aidan Treacy notched two fine points from there.

It completed a memorable weekend for Offaly with the footballers gaining promotion on Saturday in Division 3 and there is a growing mood of optimism about the future of football and hurling in the county.