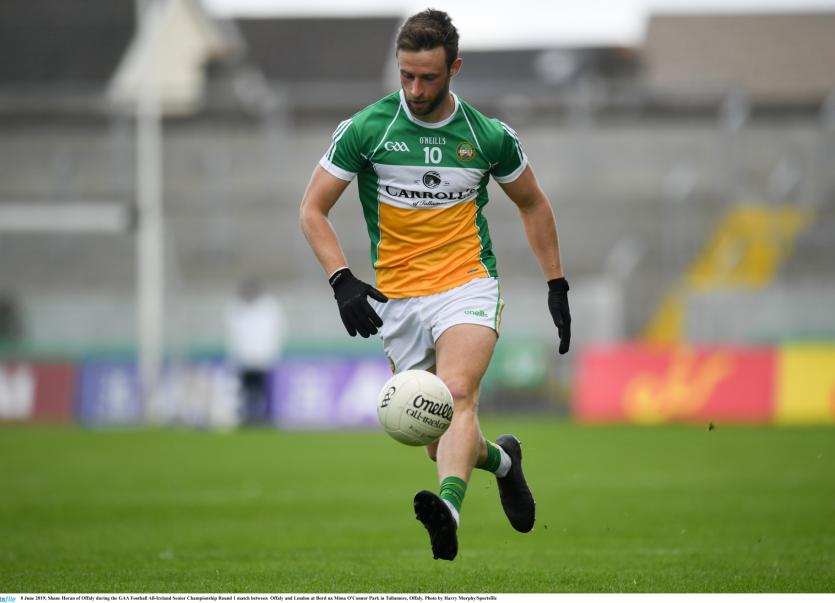 IT was one hell of a strange roller coaster of a game as a mightily relieved Offaly secured promotion to Division 2 with a nerve tingling win over Fermanagh in the National Football League semi-final in Tullamore.

Offaly deserved to win and over the course of the 70 minutes plus, the 1-14 to 0-12 final score was a fair one. However, it only tells half the story and this was a game that looked like going badly wrong for Offaly inside the last quarter.

0-14 to 0-7 up after fifty one minutes and with Fermanagh down to fourteen men, Offaly were coasting to an unexpectly easy win. Fermanagh had been reduced to fourteen when Eoin Donnelly picked up a second yellow card in first half injury time and with twenty minutes left, it was impossible to envisage any danger for the home side. They were completely on top and the better side by a distance.

With three minutes left, however, Offaly were engaged in a ferocious battle as they clung on desperately to a 0-14 to 0-12 lead. They were out on their feet, praying for the final whistle and Fermanagh looked the more likely winners at this stage. Fortunately, Offaly managed to lift the siege and a 70th minute goal from sub Mark Abbott sealed the issue. That was a lucky goal as Fermanagh goalkeeper Sean McNally misplaced a short kickout, Niall McNamee intercepted and passed to Abbott who managed to get the ball into the net from close range.

That goal knocked the stuffing out of Fermanagh and Offaly held on for a huge win – Bill Carroll almost got a second goal two minutes into injury time when he punched against the post from point blank range.

It was an extraordinary, thrilling end to an engrossing tussle. There were so many twists and turns that it was difficult to catch your breath. Offaly were vastly the superior side for the guts of 55 minutes. They led by 0-10 to 0-4 at half time and were comfortably keeping Fermanagh at arm's length until that closing quarter.

Having played so well, it was bemusing to watch the extent of Offaly's struggles once the northerners turned the screw. They became very nervous, uneasy in themselves and their error count shot up through the roof. Why did it happen? First and foremost credit has to go to Fermanagh who threw caution to the wind once they had nothing to lose and tore into Offaly. Goalkeeper Sean McNally came out the field in a sweeper type role and they threw the kitchen sink at Offaly.

The points began to fly over with Sean Quigley finding the range from frees and play. Almost in the blink of an eye, Offaly went from operating in a comfort zone to being engaged in a ferocious dogfight. The gap was back to three, 0-14 to 0-11 with eleven minutes left but Offaly dug deep. Even though they were making mistakes, getting caught in possession and turning back, they continued to battle with everything they had and they managed to take the heat out of Fermanagh's challenge by not conceding a score for a few minutes.

It was in the 66th minute when Quigley's free brought the gap down to two. Cian Farrell, who hit the post, and Paddy Dunican both missed “45s” for the winners – Dunican's after McNally had made a great save to deny Farrell a goal. Fermanagh also made mistakes in the white heat of battle, giving away a couple of soft balls and sub Ultan Kelm had a dreadful wide when a point would have reduced it to the minimum.

Mark Abbott made a terrific impact when introduced, carrying the ball, doing the simple thing well and getting that all important goal. It was nerve wracking stuff for fifteen minutes for Offaly as Carl Stewart, Ruari McNamee and James Lalor all made mistakes, among many others – McNamee, so composed, effortless and sublime in his play before that, lost a free when pushing an opponent after being fouled and Fermanagh went down the field to score.

It looked like being one of those days for Offaly but as manager John Maughan remarked afterwards, these were the type of games they would have lost in the past and they won. “We have had games like that in the past when we were hanging on and lost but we hung on and won. I mean if we had taken some of our goal chances, we hit the post three times I think, if we had bagged one of those earlier on, we might have taken the sting out of Fermanagh,” Maughan said.

The Mayo man was right about the goal chances. Peter Cunningham had been very unlucky to see a first half one rebound off the post while Sean McNally made a great save from Bernard Allen four minutes into the second half – it was a great chance and a goal at that stage would surely have killed off Fermanagh.

One of those two goals in particular could have made it really comfortable for Offaly. Fermanagh's comeback was almost surreal considering how mediocre they looked for much of the game. They just couldn't get up to Offaly's intensity in the first half. Their shooting was poor, their back play suspect and Offaly were the better side by a good 25% to 30%.

While the way they finished was an abiding memory, it should not be forgotten how well Offaly played for three quarters of the game. They were composed, hard working and effective and they did very little wrong. Anton Sullivan and man of the match Cian Farrell were on fire in the attack where Shane Horan and Ruari McNamee got through a lot of good work.

Eoin Carroll and Peter Cunningham controlled midfield. Carroll was taken off at half time but that was because he was on a yellow card and a tick and Maughan was afraid that he would follow Donnelly for an early shower – Donnelly's dismissal was a small bit harsh and there wasn't a lot of difference between what he did and Carroll's yellow card and tick offences.

Defensively Offaly were very solid for much of it with Eoin Rigney, Niall Darby and Colm Doyle doing best. The defence did contribute to their own problems late on as they became very cagey on the ball, looking for the safe option and struggling to lift the siege. However, overall they stuck to their task and twelve points was not a big score to concede.

Playing with the slight wind on their back, Offaly were clearly the better side in the first half and were full value for their 0-10 to 0-4 interval lead.

Playing composed hard football, Offaly made Fermanagh look a very mediocre side at times and could have been even more ahead, They were 0-4 to 0-1, 0-6 to 0-2 and 0-10 to 0-3 up at different stages and a beleagured looking Fermanagh side were grasping at straws.

Anton Sullivan was brilliant early on, registering three of the first four points while Cian Farrell was also immense, kicking five points, two from play, two from excellently won marks and a free. Offaly were unlucky not to have a goal when a snap shot from Peter Cunningham hit the upright in the 21st minute while Eoin Carroll got through trojan work at midfield despite a few mistakes.

Fermanagh's woe was added to when Eoin Donnelly got sent off for a second yellow card in injury time for a heavy hit on Colm Doyle, who showed great bravery to win a poorly hit Peter Cunningham pass – he had got his first yellow card for a late tackle on Eoin Carroll.

A six point half time lead represented a very good first half's work for Offaly and they were in a very strong position at the break.

It continued in that vein in the second half with Offaly extending their lead to 0-12 to 0-5 and then 0-14 to 0-7 before that stirring Fermanagh fight back.