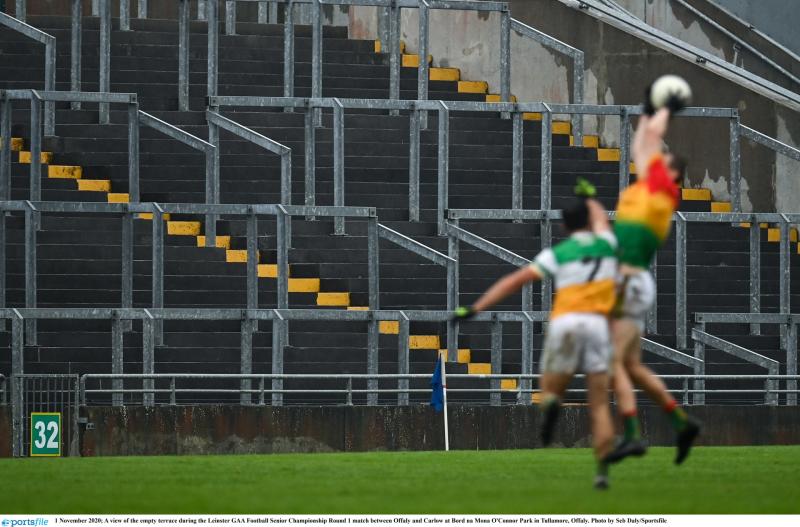 DISCUSSIONS have taken place in recent days between Offaly GAA chairman, Michael Duignan and Tullamore GAA chairman, Tom Martin in a bid to bring an end to a row over the payment of the lease for O'Connor Park in Tullamore.

A big stand off has erupted between the bodies over the payment of the lease for 2020. The County Board sought a reduction in their annual rent as the ground yielded almost no revenue last year because of Covid-19 restrictions. Tullamore GAA Club refused to give any reduction and the two sides have been at loggerheads since then. The County Board paid €42,184 of the €56,245 lease for 2020 and sought a reduction of three months rent of €14,061 because of the Covid-19 pandemic ans the resultant financial hit they took.

It escalated when Tullamore refused to go into a mediation process brokered by Leinster Council and engaged legal advice. There have been disputes between the County Board and Tullamore GAA Club at various stages in the past nineteen years over the payment of rent and implementation of other aspects of the lease agreement.

At a meeting of the Offaly GAA County Board tonight, treasurer Dervill Dolan told that two options have been agreed by Tullamore through the GAA National Finance Management Committee – that once the outstanding money is paid, Tullamore GAA and Offaly GAA will sit down with Croke Park acting an independent broker to examine the potential of the County Board buying out the remaining term or the lease or terminating the lease.

The County Board signed a 35 year lease on O'Connor Park from Tullamore GAA Club in 2002 and this will not end until 2037 when the County Board will have the right to renew it if they wish.

A massive development of O'Connor Park took place in the 2000s after Offaly lost home venue for a 2004 Leinster SFC clash against Westmeath when Leinster Council ruled that it could not host the expected crowd because of health and safety regulations. A new 7,000 seater stand and terrace was constructed, with impressive press and ancillary facilities, turning O'Connor Park into one of the best provincial GAA grounds in the country. It has been capable of hosting 20,000 crowds and has been the venue for some big glamour clashes.

Covid-19, however, played havoc with the County Board finances and they made a big loss on their day to day running last year. Servicing the €1.522 million debt on O'Connor Park has proven to be challenging for the County Board and in 2015, the debt was taken over by Croke Poark as the Offaly County Board ran into major financial difficulty – a deal was struck by then County Board chairman Padraig Boland and other officers, and approved by a full board meeting.

The National Finance Management Committee have offered the County Board a €20,000 top up to their existing loan to help pay Tullamore what is owed but they have turned this down. They have proposed that the County Board pay Tullamore the full amount up to June 30 and that a new monthly repayment schedule of €5,000 a month replace the existing payment schedule of two up front payments each January and July.

Mr Dolan revealed that €47,607 is now owed ion the lease and this includes interest which has been charged since a rent summary of €46,519 in February.

The proposals were discussed at a meeting of the Offaly GAA Management Committee earlier this month and it was decided to turn down the €20,000 loan top up as they felt an “increase to club levies would not be acceptable” – the O'Connor Park debt is serviced by annual levies from clubs in addition to income that the ground yields in a normal year.

The Management Committee agreed to consider their options about both buying out and terminating the lease, however, chairman Michael Duignan told tonight's meeting that he has had “constructive discussions” with Tullamore GAA chairman Tom Martin today and earlier in the week and that they will be speaking again in the coming days.

The board have also reviewed the amount to be levied on each club for O'Connor Park and the payments will be scaled according to the size of each club. The levies will yield €100,500 and six bands have been proposed.

A committee to oversee the levies and adjudicate on clubs seeking to change bands will be chaired by Finance Committee chairman Brendan Jennings with assistant board treasurer Sinead Daly as a non voting secretary. Six club nominees, one from each band, will also serve on the committee and clubs can submit proposals in relation to the bands before a final recommendation is made to the Management Committee.

The annual rent paid to Tullamore for O'Connor Park was €44,304 back in 2002 but index linking with inflation every three years means that it is now over €55,000.

The County Board sought a renogiation of the terms of the lease but this was not agreed by Tullamore. However, the start of discussions between Michael Duignan and Tom Martin suggests that a solution to the row may now be possible.