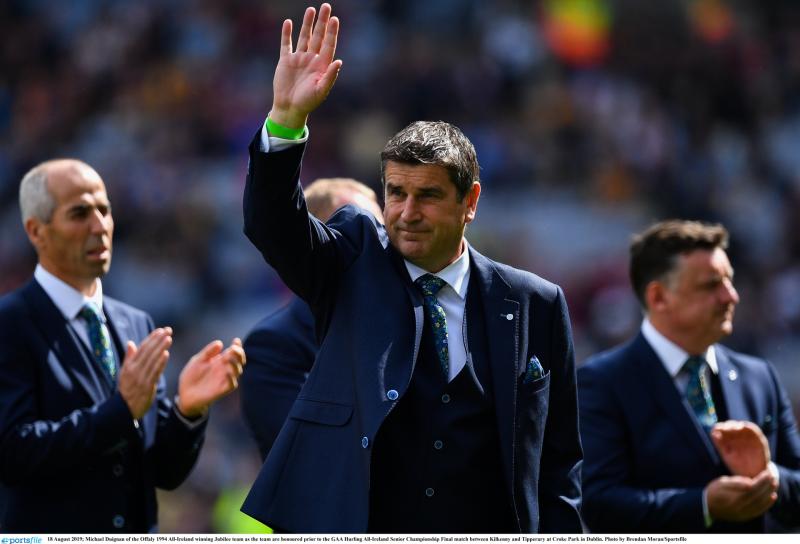 OFFALY GAA chairnman Michael Duignan made a passionate plea to clubs to embrace the appointment of full time coaches (Games Promotion Officers) in his address to Offaly GAA Convention on Tuesday night.

Mr Duignan told delegates that the appointment of full time club coaches was a pivotal part of his vision for improving playing standards of Offaly football and hurling teams.

The Durrow club man noted that Edenderry (Mairead Daly) have a full time GPO while the appointment of one in Tullamore has been approved and one is due to take place for Birr, Drumcullen and Seir Kieran GAA Clubs in January.

He urged clubs to follow this example, remarking: “We are all off the same hymn sheet in terms of growing coaching staff on the ground. It is a huge part of our plans and we want a county wide roll out of the GPO model where coaches are part of clubs.”

Elected unopposed for a second year as chairman, the former Offaly hurler and footballer announced that a Leinster Council official will be speaking to clubs in January about what they need to do to appoint a GPO. “It will be a colloraboration between clubs, Leinster and Offaly GAA. It is a challenge to fund this but we have to do it. I am very involved in driving that forward and I am looking forward to that.”

Mr Duignan stated that it is an opportunity for coaching and games development, county teams, their games programme and Faithful Fields in Kilcormac to come together. He also spoke about the importance of the Faithful Fields devlopment in providing a venue for county teams training. “Faithful Fields can't be understated,” he commented.

He noted that there were twelve clubs represented on the Offaly minor hurling panel this year, thirteen on the minor football. “The gospel is spreading and if we can get more players from more clubs and get more competitive, we will get better,” he declared.

Mr Duignan stated that he was very excited by the challenge when elected last year but it turned out to be a very “unusual year”.

“Everything changed for us all in March with the advent of Covid-19. It had a huge impact on all our lives, not just GAA. People lost lives. My own father died at the start of it and people lost jobs. It completely changed our lives.

“It brought huge challenges but the GAA response was exemplary and it gives me huge hope for the future of the GAA in Offaly.”

Noting that he took on the job as Offaly community champion as part of the wider Offaly response to the crisis, he stated that he contacted all 41 clubs and that most were up and running already with providing support in their communities. “We tried to put structure on it and we asked every club to appoint a co-ordinator. Some of the work that went on was unbelievable and I got a weekly report from each co-ordinator.”

Mr Duignan referred to one week in Apsirl as a typical example of the role GAA clubs carried out in Offaly – there were 200 deliveries of food, fuel etc, 200 social calls, clubs worked with St Vincent de Paul, the Garda, Aware, etc; people were brought to hospital and to other appointments.

“It gave me huge pride tosee that response and it gave me inspiration to see the way we moblised, organised and carried out work. If we can bring that spirit to Offaly GAA, it will be very positive. It was a big positive to see the way the GAA united behind the community effort.”

Mr Duignan thanked all volunteers, clubs, the Management Committee and other committees and he singled out the Competitions Control Committee for special praise. “They had to go back to the drawing board many times and they kept doing their job. What the CCC did at underage and adult level to keep fixtures going was just fantastic.”

He looked forward to the completion of all championships next year and thanked clubs, noting that there was pressure on the ones with floodlights. “Matches were on and off and they didn't know what was coming next but there were no complaints and that was fantastic to see,” he smiled.

Mr Duignan thanked county team managers and players for embracing the unprecedented circumstances, stating that everyone was “very understanding and acceptant”.

The big news from the Covid-19 year was a huge financial loss of €259,983 for the year and Michael Duignan talked about the challenges that lies ahead for the board and clubs.

“It is very obvious there is a huge challenge ahead of us in Offaly GAA. We need to help ourselves and set up a fundraising group to bring funds in and support the change and efforts we want to make over the coming years. We need the support of businesses and individuals more than ever before. We will be knocking on doors to get out of the deficit we are in and to put our plans in place,” Mr Duignan said.

He added: “Clubs and fundraising will have to go hand in hand. The Grand Canal Walk will take place early in the new year. We don't want to be overly reliant on Leinster and Croke Park, they have massive problems too. Let's help ourselves to get back on our feet.”

He encouraged clubs to participate in forums and contribute to their strategic plan in the new year. “We need to find out what the issues are on the ground and fix them if we are to improve Offaly GAA,” he urged.

He talked about plans to properly split the GAA club and county seasons but noted that these mightn't happen until 2022.

Mr Duignan stated that he would prefer to see the county games programme completed early in 2021 as they are classified as elite and there will be less complications with games going ahead. However, he revealed that there is an argument from Croke Park that it should be later in the year when spectators may be allowed back in full numbers and there will be big financial benefits.

He said he could see the merit of those arguments and remarked: “Everyone is in uncharted territory. There mightn't be a full split season for 2021 but it will almost certainly happen in 2022. What it did for clubs this year was massive. It was great to see players at all age groups training with their clubs. It made a huge difference to our teams and clubs to see everyone in it together. Maybe we won't have it in 2021 but we will in 2022.”

He welcomed the recent merger of ladies county players with the Gaelic Players' Association, and urged people to continue to work to bringing ladies football and camogie under the one umbrella with the GAA.

Mr Duignan concluded by thanking all front line workers for their efforts during the year, stating that many of these are volunteers in their clubs and he expressed sympathy to the family and friends of all who passed away during the year.