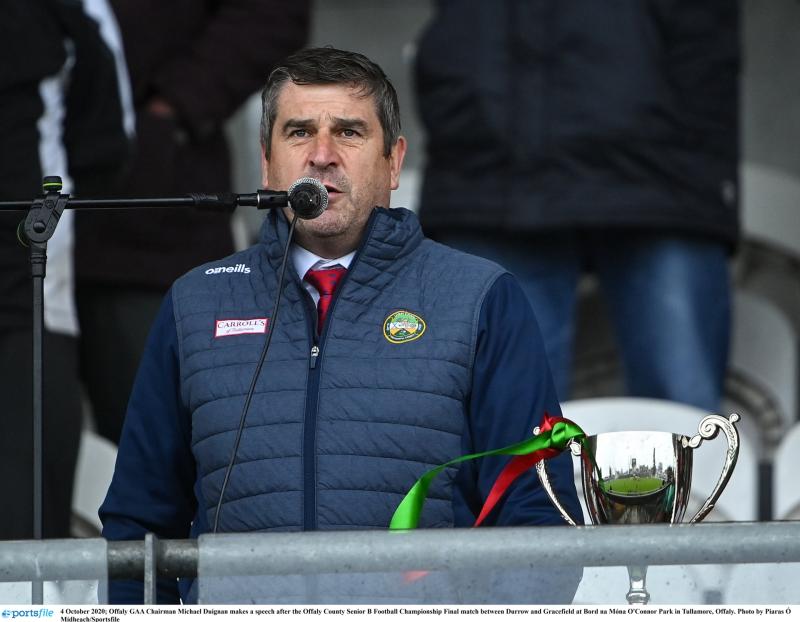 With the quota at 34, Dolores Slevin survived a draw of lots to avoid first round elimination after she and Eamon Phelan (Ballyskenagh/Killavilla) received 21 votes each – Joe Higgins was on 32 with Brian Gavin on 26 after the first ballot.

In the 2nd count, Joe Higgins was on 38 with Brian Gavin and Dolores Slevin on 31. The distribution of Higgins' surplus of 4 saw Slevin move to 34 with Gavin picking up just 1 to go to 32 and lose out.

It was a huge win for Slevin as she turned the tables on Gavin who beat her in last year's drama packed Convention – Gavin had been elected as part of a package that saw Michael Duignan (Durrow) defeat the incumbent chairman Tommy Byrne (Gracefield) and Dervill Dolan (Clara) beat Birr's Jimmy Hogan in a vote for treasurer.

The package had been put forward for election after a public meeting in Tullamore that was called to determine the mood for change on the Offaly GAA County Board among former county players, club officials and supporters.

The other member of the package, Edenderry's Colm Cummins was beaten by Rhode's James Murphy in a vote for vice chairman last year but he was elected as secretary tonight, replacing Pat Horan of St Rynagh's – after initially stating that he would seek re-election, Horan had pulled out last week, complaining that other members of the Management Committee had canvassed against him on behalf of Cummins and stating that he felt it was in Offaly GAA's best interest that he should go if other officers didn't have confidence in his ability to do the job.

The contest for Leinster Council delegate was the only vote on the night as Michael Duignan (Durrow) was re-elected unopposed along with all the other officers.

Apart from that, the Convention was a quiet affair with the online format not conducive to the usual discussion and debate. Technical problems resulted in a brief delay with Michael Duignan's voice breaking up during the election of officers but thankfully they managed to get all business concluded.

The big news from the Covid-19 year was a huge financial loss of €259,983 for the year and in his address to Convention, Michael Duignan talked about the challenges that lies ahead for the board and clubs.

“It is very obvious there is a huge challenge ahead of us in Offaly GAA. We need to help ourselves and set up a fundraising group to bring funds in and support the change and efforts we want to make over the coming years. We need the support of businesses and individuals more than ever before. We will be knocking on doors to get out of the deficit we are in and to put our plans in place,” Mr Duignan said.

He added: “Clubs and fundraising will have to go hand in hand. The Grand Canal Walk will take place early in the new year. We don't want to be overly reliant on Leinster and Croke Park, they have massive problems too. Let's help ourselves to get back on our feet.”