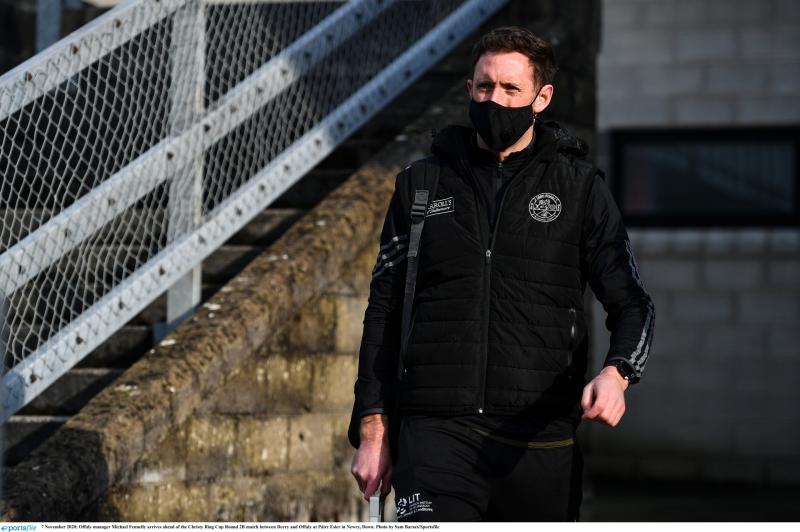 MICHAEL Fennelly was happy but definitely not jumping through hoops as he analysed Offaly senior hurlers' facile 0-32 to 1-12 win over Derry in the Christy Ring Cup on Saturday in Newry.

The Offaly manager saw plenty to please him but also observed loads of room for improvement as he tries to raise standards.

Offaly played particularly well in the first quarter and then finished strongly as they recorded a fairly routine win over the outclassed northerners – Derry did come back at them a bit early in the second half, outscoring Offaly by 1-3 to 0-3 to reduce the gap to eight points but a red card for Derry corner back John Mullan in the 44th minute knocked the heart out of them.

“A good performance, in places. 32 points and you would be happy to hit 32 points any day but there is room for improvement. We made some silly mistakes, we made some silly decisions and it can bring a team back in quite quickly. They got a man sent off in the second half which took a bit of pressure off us but I did feel Derry were coming back at us in the second half and if they had got another goal, we could have been under more pressure.”

He agreed that the sending off more or less ended the game as a contest.

“It took the sting out of it to be fair. Look it, we started very well to be fair. The lads didn't put a foot out of place in the first fifteen minutes. They hit eight points which is fair going, even though our efficiency was only 53%, off the top of my head in the first fifteen minutes, so there is still a bit of room for improvement on our scoring shots. Again, there was a bit of dew on the field here. It makes it a bit more slippy, a small bit more trickier.

“All in all, our first game, our first championship match. You would always be a bit concerned coming up to Down here. It is a tighter field. I played here myself in January. It would be great if there was a crowd here in one sense because it would bring a huge atmosphere but we are delighted to get the win. Straight away we have to prepare and recover for next week.”

One negative in the afternoon was the failure to score goals with Offaly only creating one real chance – David Nally raced through on goals during the second half but didn't get the power he needed and his shot was saved.

Fennelly agreed that it was a good chance and he said:

“No, he does be a bit relaxed all right at times but the fact that he made the run is important and that we created it is important but I would have liked to have created a bit more. I think Colm Gath looked dangerous any time he got the ball in there in the first half in particular and if he had got one of them goals, it could have opened up a bit more for us. But I am still very happy with 32 points and look, we would like to be getting at least one or two goals per game and it is something we didn't hit our target on.”

Offaly tried to retain possession with the emphasis on finding their man and not everything worked out. He acknowledged that patience is needed:

“It is completely a work in progress. The frame work we have is we are trying to plan more things and do what suits this team. There is no point in me coming in with a system and trying to implement it. I have to see what is there and work with that. My coach Johnny Kelly is very good and experienced in that field as well. For this year in particular, we have been watching and seeing what we have. We are looking at the club games and that will dictate how you play but the lads did very well. The puckouts were very good, I think we would have won 70%. All in all, happy and it is good confidence for the boys going into the next game, just to get that win. “

The semi-final draw has pitted Offaly against Down, back in Newry next Saturday and Fennelly remarked:

“Hopefully we can build on that for next week. We have nine players left at home today, which is a huge amount. We have a panel of 35 and we can only bring 26. It is very difficult to leave out those players and we feel for them.

“We all travelled today on our own. With the Covid protocols, we all have to be extremely careful and that is what we are doing. It wasn't too bad. Thankfully with the bit of a lockdown, there weren't many cars on the road. It is very quiet and we flew up.”