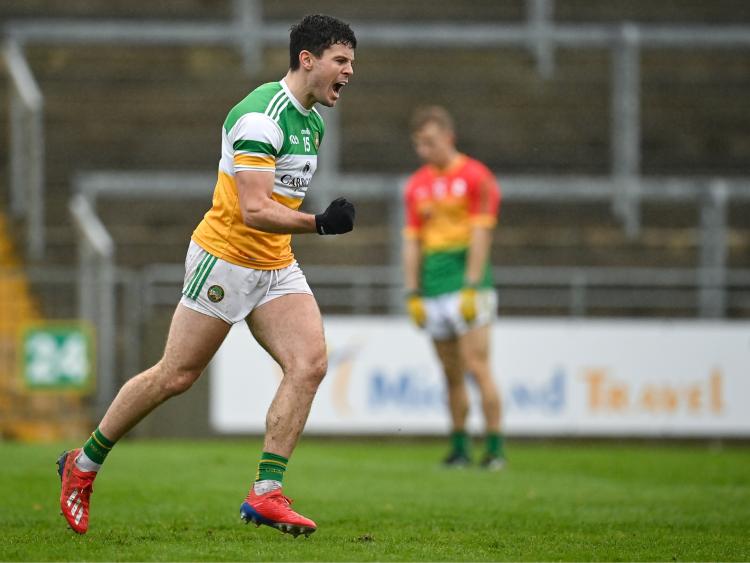 OFFALY will have a big date with destiny when they take on Kildare in the Leinster Senior Football Championship quarter-final next Sunday at the unusual time of 5.30pm in O'Moore Park, Portlaoise: the time was fixed when there was a possibility of spectators being allowed at games and Laois could be playing Louth in Tullamore, which would have affected manpower for both Laois and Offaly – as it worked out, Laois are now playing Longford and there would have been no obstacle to a traditional mid afternoon game.

It is a season defining clash for Offaly and they find themselves in the role of fairly big underdogs after less than convincing form since the resumption of activity a few weeks ago.

John Maughan's charges retained their status in Division 3 of the National Football League despite defeats by Tipperary and Derry while their performance in last Sunday's championship opener against Carlow raises plenty of questions about their current health.

Offaly won by 3-14 to 0-20 and were very relieved to hear the final whistle – they were eight points up midway through the second half and looked to be in complete control but a black card for Cian Farrell and six points on the trot brought Carlow right back into it. While Carlow didn't really threaten to get a match winning goal, it was all uncomfortably close and Offaly were not far away from making a devastating exit.

Offaly produced a very mixed bag of tricks on the day. They played some good attacking football and 3-14 was a satisfactory tally to amass but 20 points was a horrendous score to concede against Division 4 opposition and was the most worrying part of the afternoon.

The Kildare attack will be more potent than Carlow's and the Offaly defence will have to really tighten up.

Offaly did work hard on the day, they put together some excellent moves and took quality scores but there is an abundance of things for Maughan and selectors to work on this week.

Offaly's error count was higher than management would have liked, though in fairness we are entering Winter football now and mistakes will be made at this time of year. Offaly's movement wasn't great at times and in the first half in particular, the support play close to and movement in front of the man in possession wasn't as lively as it should have been.

Offaly had bitten the bullet before the game by naming Rhode duo, Niall McNamee and Anton Sullivan in their attack. Both had been subs in their two league games but with the Offaly attack struggling to find their best form, Sullivan and McNamee were thrown in from the start against Carlow.

It proved to be a wise decision. Now in the veteran stages of his career, McNamee tends to play his best football early on in games and he netted a crucial second minute goal. His handling was not quite as deadly as it usually is as he fumbled a small bit of ball later on but he was still pivotal to Offaly's win.

Sullivan's omission from the starting line-up against Derry and Tipperary was a surprise as he is in the peak of his career and he stated afterwards that Maughan had a frank discussion with him and spoke to him about his reasons for leaving him off. Whatever the reasons were, it appears to be working. Sullivan was tremendous when he came on at half time against Derry and he was also one of Offaly's best players last Sunday – scoring two fine points, taking on players at pace, moving the ball on quickly, working hard, tackling well and doing most things right.

Management won't be spending any time pondering the selection of Sullivan and McNamee this week. Both finished the Carlow game and now have to be automatic choices.

They do, however, have some injury problems to worry about with Jordan Hayes and Shane Horan going off injured within minutes of each other during the first half. Hayes was assisted to the line just moments after scoring an excellent 18th minute goal – his goal as he raced in from the right and blasted a great shot to the roof of the net off his left foot was one of the highlights of the afternoon. Unfortunately the Edenderry man dislocated a toe in contact while shooting but he told Maughan afterwards that he expects to be available for next weekend. Whether that is the case or not will be determined by treatment this week but Offaly will be doing everything in their power to get Hayes right. He was playing well on Sunday and has really progressed as a footballer in the last year or so.

Hayes had formed a midfield partnership with Aaron Leavy and the Tullamore man was also replaced before half time – Leavy hadn't been playing that well but he remains a very good footballer with a lot to offer at this level and management are likely to show faith in him.

The extent of Shane Horan's injury will also be determined this week. The Kilmacud Crokes man is a son of a Ballycumber father and Kilcormac mother and while he has not been playing as well as he did last year, he was excellent in the build up to Hayes' goal and remains a very good footballer. With McNamee and Sullivan starting, there is scope and a need for a work horse like him and Offaly will want him to be available.

Cathal Mangan also fits that work-horse type bill and he played well when he was introduced for Horan – Rhode's Conor McNamee, another hard worker, had come on for Hayes. Mangan brought a fine physical presence to proceedings when he came on, took and gave hits and foraged hard for the ball. He used it well, got a good point and both him and Conor McNamee will be the main options should Horan or Hayes not make it.

The other big dilemma facing Offaly will be whether to start Colm Doyle or Joey O'Connor at wing back. Doyle did very well for much of the first half on Sunday but got into yellow card trouble and was close to getting a second one. That was a factor in the decision to bring O'Connor on for him on 53 minutes and the St Rynagh's man was once again composed and solid on the ball. O'Connor's return to the panel has given Offaly welcome options and he could also be used in attack. Cian Donohue is also a defensive option for Offaly but they won't be making many changes for the Kildare game – unless the injuries to Hayes and Horan force their hand.

One of the issues facing Offaly is that they have a number of inexperienced players on their bench and none of these were thrown into the fray last Sunday. Cappincur's Bill Carroll, Ballycumber's Jack Quinn, Kilcormac/Killoughey's Cathal Donoghue and Edenderry's Rory Egan were all called into the panel as a result of impressive form in the club championship. They have all played U-20 football for Offaly this year and have a lot of potential at this level. You can make a strong case for throwing a couple of them in at the deep end but it is a hard judgement call and Kildare under lights on a Sunday evening on a heavy pitch and with likely adverse weather may not be the ideal setting to give them their head. The fact that none of this quartet was used against Carlow suggests that they are there for experience at the moment but it does leave Offaly will limited options on the line if they pick up injuries or players don't go well.

Peter Cunningham hasn't been playing at his peak in recent games but he showed flashes of getting back to his best late on against Carlow, when moved out to midfield in the closing quarter. His carryingof the ball out there was encouraging as he remains one of Offaly's best footballers and crucial to their chances of progress.

It has been a very strange year with Covid-19 restrictions dominating life and club championships given the go ahead before players returned to their county. That has been a definite factor in Offaly's form but as John Maughan has said, every county is in the same boat and they won't be using that as an excuse.

The impression remains that Offaly are capable of a really good performance, that their current form is not an accurate reflection of their ability. They have a lot of areas to improve on but awareness of these is a big part of the battle and John Maughan and co won't be brushing anything under the carpet this week.

Kildare are also eminently beatable. They are operating at a higher level than Offaly at the moment but they are vulnerable and Offaly do have a chance. At the moment, however, you can't make a compelling case for a shock victory. Kildare played in Division 2 of the National Football League and were not far off promotion. Offaly were in Division 3 and were closer to relegation than promotion. That is a very significant gap.

One plus for Offaly is that the pressure is now off and there is little external expectations about them beating Kildare. They will be able to play with freedom and give it a lash. They just might click and go very close to a famous win but the form book points very definitely in Kildare's direction and that is what we have to go by.