No complaints from battling K/K 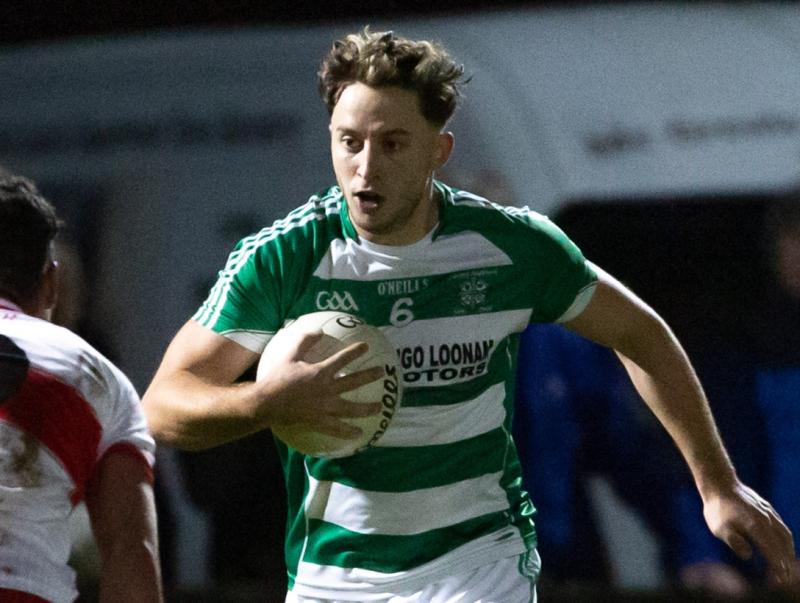 Joey O'Connor had a powerful game for St Rynagh's.

IT was not pretty and plenty of the football left a lot to be desired but that won't worry St Rynagh's in the slightest as they celebrate a deserved win over Kilcormac/Killoughey in the Intermediate Football Championship final at Bord na Mona O'Connor Park.

Finals are all about winning and St Rynagh's did what they had to do in a real tough, dour and uncompromising dogfight that went down to the wire. Injury time points from sub Conor O'Sullivan and a Joey O'Connor “45” gave the Cloghan based club the win as a battling Kilcormac/Killoughey side fell short.

Ultimately the result reeked of justice, from a couple of persectives. Firstly, and most importantly, St Rynagh's were that little bit better on the day. In a very hard hitting affair where nothing was held back – and in some cases you would wonder were markers being laid down for the senior hurling final between Rynagh's and K/K next Sunday -, St Rynagh's error count was that bit lower, they used the ball a bit better and they retained possession better.

St Rynagh's also put a lot more into football than Kilcormac/Killoughey this year – they prepared diligently for this final, working with their dual commitments with their hurlers whereas K/K put all their eggs in a hurling basket and didn't train for football. It is remarkable that K/K were able to reach the final with that level of commitment and it shows how good of footballers they have – you would wonder what they would do if they made a genuine effort at football some year and the impression remains that they have the players to be a good senior B side.

Ultimately, however, their chickens came home to roost here and it was a lack of footballing practice and sharpness that was primarily responsible for their defear. It is a credit to them, however, that they were so competitive, so close to a win and in injury time, it could have gone either way – K/K only got one score in the second half with the wind on their back, a well taken |Stephen Leonard goal with six minutes left, and that levelled it up a 1-4 to 0-7 at a stage when it looked like St Rynagh's had more than enough done.

It was on a knife edge for a few minutes and K/K had a couple of attacks that could have yielded points but St Rynagh's kept their heads, battened down the hatches and managed to rally the forces. With seven minutes of injury time played, it was in the mix up to the final whistle but St Rynagh's played with fierce determination to get the result.

It wasn't a game for the faint hearted, or for the purists. With referee Fergal Smyth allowing things to run, frees were very hard earned and there were a good few fouls on both sides not given. In a way this was a good thing, as it would have been a free fest if he blew everything but it was one of those games that will be forgotten by most observers apart from the protagonists and their keenest supporters.

The game was rescued somewhat by the honesty and physicality of both sides but there were too many mistakes made over the hour – many forced but a good percentage self inflicted while both sets of attacks had afternoons to forget. K/K's attack were particularly off their game and their 1-4 tally doesn't tell any lies whatsover. They kicked some very poor wides and some of their shot selection was just wrong as they had pops from very unlikely positions. When their route one approach didn't work as Rynagh's dealt very competently with it, K/K simply hadn't the football work done to open them up with more imaginative play.

St Rynagh's were guilty of some of the same sins but their shot selection was better and they also got their tactics right in the second half as they drafted full forward Darragh Tierney back as an extra defender, sitting in front of the K/K full forward line: where they tried the predictable tally of lofting high ball in on top of James Gorman and when he didn't find his form, later Conor Mahon. However, it didn't work and with Tomas Flaherty very good, managing to break ball that he didn't win, Darragh Tierney was able to clear a lot of loose ball.

It was a strange game. It was fierce, almost brutish at times and so intense: yet it was weirdly pedestrian for spells with players on both sides sluggish and not injecting real pace when on the ball – they have both shown this year that they can play football at pace but it only manifested itself occasionally here.

St Rynagh's had first use of the wind but K/K played their best football in the opening quarter. Conor Mahon was superb for them in this spell as he ran the midfield show and with Cathal O'Donoghue also showing moments of class inside him, they carried the game to Rynagh's.

However, scores were at a premium and both sides had some fairly shocking wides. K/K led by 0-2 to 0-1 after three minutes, St Rynagh's were 0-3 to 0-2 ahead after eight minutes, O'Donoghue equalised with a punched point in the 14th minute and then there was a long scoreless spell until Jordan Quinn put K/K in front in the 30th minute. Joey O'Connor's free sent them in level, 0-4 each at half time.

With the wind to come, the odds should have favoured K/K at the break but you just knew it was going to be a struggle for them and so it proved. St Rynagh's were able to contain them through a great work ethic, never giving them a second and ensuring that K/K's more direct style did not have success.

Stephen Leonard's goal when he raced in onto the end of a fine move brought it level and extra time loomed before those late Rynagh's points – O'Connor's closing “45” came after Steven Rosney made an excellent save from Sean Hanamy.

St Rynagh's will be understandably thrilled at this win. They had three of their long time servants Tomas Flaherty, Ger Rafferty and Gary Mahon available this year and this was crucial. Flaherty manned the edge of the square superbly, Rafferty showed his vast experience by doing the simple thing so well in midfield and Mahon got three points, two from play, before being taken off early in the second half.

Rynagh's had plenty of other players who made powerful contributions. Pat Camon was pivotal at midfield, doing a lot of unseen work as he covered hard yards, took and gave hits and drove his side forward. Joey O'Connor had a man of the match display at centre half back – he missed a few frees but his influence was considerable as he avoided tackles and used the ball well, most of the time. Captain Sean Dolan didn't have his best game of the year but he also played his part with his physicality and ability to carry ball – he got caught in possession some times but he was crucial to Rynagh's as he has been all year.

Graham Lynch provided some of the game's moments of real class. The Lusmagh man showed great skill and pace and while he didn't score, he still created a buzz of anticipation every time he got the ball in hand. There were other unsung heroes - Ivan Hanamy was immense in defence, Dermot Shortt got through a mountain of effective work and Darragh Tierney did his role to perfection in the second half.

For K/K, they have no complaints at the result – they gave it their best shot but just couldn't create and take chances. They have brought a huge amount to this championship and it is nice to see a team play a direct style for a change but it didn't work here and as the second half wore on, they began to struggle more and more.

Conor Mahon was their best player and the only time he went out of the game was when they moved him into full forward during the second half – he went back out to midfield late on again. He was particularly influential in the first half while James Geraghty, Damien Kilmartin, Tom Spain, Cathal Donoghue and sub Peter Geraghty also impressed at different stages.

See full report in Tullamore and Midland Tribune on Wednesday.