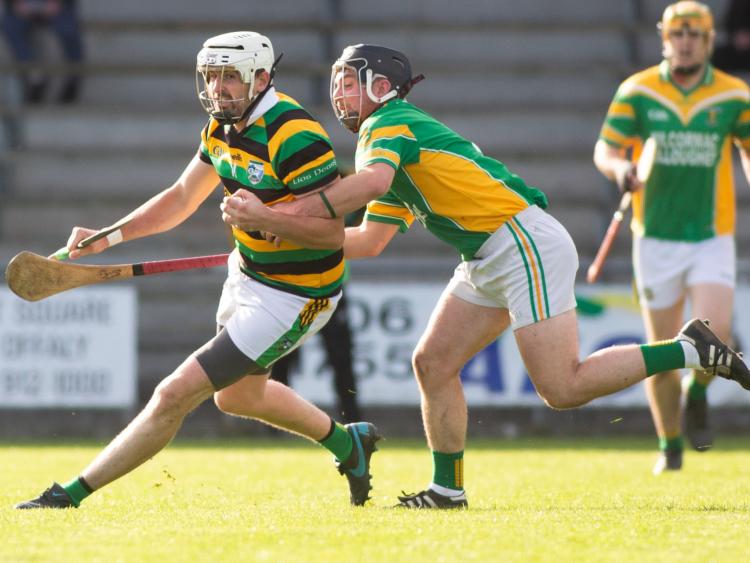 IT may not be a final pairing to capture the imagination of the wider footballing public, particularly in the game's strongholds in the north of the county but there is still something very enticing about the meeting of Kilcormac/Killoughey and St Rynagh's in the Intermediate Football Championship final.

Both have reached this stage entirely on merit. They have been the best two teams in the championship, they have played the most effective and attractive football and it is absolutely no surprise that they have won through.

It pits two clubs from hurling strongholds in the south of the county, though there are very significant differences in their footballing ethos. While hurling is very much the number one game in Kilcormac/Killoughey and football a mere diversion at times, the situation is far more complicated in St Rynagh's.

There are two distinct clubs in St Rynagh's, albeit with a significant crossover and volume of dual players. St Rynagh's Hurling Club is based in Banagher, they are the current senior hurling champions and a powerful, productive force on Offaly hurling since they burst onto the scene in the 1960s. St Rynagh's Football Club has their base in Cloghan and they have a large volume of passionate football people whose first club is very much the big ball game.

However, there is a long tradition of Banagher producing good footballers and Cloghan having excellent hurlers and both these factors have been crucial to the success of both clubs. Funnily enough, football was actually very strong in Banagher in the early days of the GAA, before hurling took primacy and there were similar stories, in both football and hurling, in a lot of areas in Offaly in those early decades.

Banagher actually won a Senior Football Championship in 1910 while they conceded a walkover to Tullamore in the 1913 final. Cloghan quickly emerged as a footballing force in those crucial early years. With the Parnell split and an IRB (Irish Republican Brotherhood) takeover almost putting the GAA under in the traumatic early years following its 1884 formation, the first official Offaly championships only took place in 1896 – there had been earlier championships but these have been scratched from the record as a militant Offaly refused to affiliate to the GAA's Central Council, partly in response to the IRB takeover while there was also a strong swell of sympathy in the county for patron Charles Stewart Parnell after his affair with Kitty O'Shea ended his great political career.

Cloghan competed in the first two finals in 1896 and 1897, losing to Tullamore in both while they defeated a then dominant Geashill in the 1903 final – Geashill won the championship in 1902 and four in a row from 1904 to 1907 as Cloghan stopped them from doing six on the trot. Cloghan lost to Geashill in the 1905 and '06 finals while they were beaten by Killeigh and Rhode in the 1916 and 1918 deciders.

As Tullamore, Rhode and then Walsh Island became the great forces in Offaly football, Cloghan entered decline before returning to the pinnacle in 1945 when they beat Rhode in the final. The 1940s and 1950s was a great era for Cloghan, although they only won that one championship – they were beaten in finals in 1947, 1951, 1956 and 1959, when they last appeared in the final. That Cloghan team won wide respect for their ability and toughness, though they also had a reputation for being rough but that was a different era, one where such play was part and parcel of football.

The formation of St Rynagh's in the early 1960s changed the face of Offaly hurling in particular – at that time, there were three clubs in existence in the parish, Ballivor, Banagher and Cloghan and ironically, it was an objection by Birr to the legality for Paudge Mulhare, who played for Ballivor in a south Offaly final, that prompted the parish to come together under a unified St Rynagh's banner.

The dividends for Offaly hurling was immense as St Rynagh's changed the club balance of power as they embarked on an incredible run after their 1965 breakthrough – while Cloghan provided one of the greats of Offaly football in the 1960s, Greg Hughes, a great full back on the 1960/1961 Leinster champions and an All-Ireland medal winner in 1971.

Cloghan is also the home to one of the greats of Offaly hurling, Martin Hanamy, an absolutely brilliant corner back from the late 1980s through to 2000 and captain of the 1994 All-Ireland senior hurling champions. Hanamy was also a very good club footballer but hurling was obviously his number one game and football has often played second fiddle to football over the years – Banagher man and current Offaly GAA chairman Michael Duignan was also an excellent footballer and played senior for Offaly in the early 1990s before concentrating on hurling and winning All-Ireland medals in 1994 and 1998.

The current St Rynagh's team also have a mix of dual players, from both Cloghan and Banagher ends and hinterlands. Pat Camon, injured for the past couple of games, is a Cloghan man whose first priority is hurling. Sean Dolan, one of the ticking heartbeats of both senior hurling and football squads, is a Cloghan man and Joe O'Connor, one of their key players and an Offaly senior footballer before drifting off the squad, is from Cloghan and a very important member of their hurling squad.

The team includes Banagher man Dermot Shortt and there are others from Banagher who would be well capable of making their football team but haven't been there this year and that is part of the challenge that faces them – the likes of Ben Conneely, Stephen Quirke and others are well able to play football but on the plus side, Lusmagh's Graham Lynch is there as a permission player and his speed, skill and energy has been a huge asset to the team.

Kilcormac/Killoughey have far less complications. They enjoy playing football, it provides an outlet for players without the pressure that invariably accompanies their senior hurlers and when they get their act together, they are more than capable of playing well. However, on any given year, they are more than capable of dropping football as easily as they pick it up – just barely fulfilling fixtures, sometimes not doing that and not being truly competitive.

Yet there is a strong footballing desire there: Despite the annoyance that football can cause senior hurling managers, they continue to field underage teams and ensure that players are brought up with the game. They have a small but influential hardcore of people with a deep love of football – both natives such as Christy Hand and many others along with people who have moved into the parish, and helped keep the flag flying, even when they felt they were swimming against the tide – former Tullamore senior footballer, Alan Hogan, who played in the 1989 All-Ireland minor football final defeat by Derry, is one who springs to mind.

A lot of their senior hurlers are also excellent footballers and there is no doubt that K/K could survive at senior “B” level if they gave more of a commitment to football. However, commiment is their problem, and like most years, they haven't had too many training sessions this year as hurling has once again been their main focus – however, you have to respect K/K's footballing ability and once they get out onto the field of play, they are very serious.

Pipped in a semi-final against eventual champions, Shannonbridge last year, they have been excellent for the most part this year and their team includes a likely future Offaly senior footballer in Cathal Donoghue. Donoghue was very good for Offaly U-20 footballers this year and his movement, direct running and work rate has been instrumental in K/K reaching this stage. Donoghue does face special challenges in his bid to be a county footballer as he simply won't get the volume of football and training that every other member of the panel will get in their club – and in a Covid disrupted year like this, that can make a huge difference.

Conor Mahon and James Gorman are still contributing powerfully, though both are now in the veteran stages of their career – both played minor and U-21 football for Offaly and had the ability to play senior but hurling took precedence. Damian Kilmartin was also a very good minor footballer for Offaly and is still playing well for them. K/K's footballing hand has been strengthened this year with the transfer of Tom and Danny Spain from Erin Rovers. Their father Ger is a Kilcormac Spain and they transferred after a split with the Erin Rovers club – Tom Spain has played senior hurling for Offaly and that is his first priority, which was a factor in the transfers. However both Tom and Danny have played a lot of football for the Pullough club and they bring a lot to the Kilcormac/Killoughey table.

Colm Leonard is another promising young footballer – a member of the Colaiste Choilm team that won the Leinster colleges senior “B” football title this year, he is a very highly rated defender who could progress into a county footballer. However, his progress is far from assured, mainly because of where he is and while he could make it, his prospects would certainly be greater if he was from Rhode, Edenderry, Tullamore etc.

Key senior hurlers such as Damien Kilmartin, Jordan Quinn, Dylan Murray, Thomas Geraghty and Stephen Leonard are also playing very well for the K/K footballers and in a way, they are favourites to win this one.

Yet it is as close to a 50/50 game as you can get. St Rynagh's will have done a lot more work in football and that has to be a factor – K/K might be fit and full of running. They might be excellent when they open up but it can take them time to warm into games and some day, this may prove fatal.

Interestingly St Rynagh's have turned the clock back by three of their veteran players back on board this year. Ger Rafferty has played a lot of football for Offaly and he is doing the simple thing so effectively at midfield for them while Tomas Flaherty is manning the defence at full back and Gary Mahon is showing that class is permanent as he does the simple thing so effectively and finishes so clinically in their attack. Those three looked to have winded down their club careers but are contributing powerfully to the St Rynagh's success story this year.

Their bodies may not be able to do what they once were but they are such clever, steady, strong footballers that they are flourishing. The final will ask special questions of them but they are three footballers any club would love to have.

It sets the scene for a compelling final and it would take a brave man to predict the outcome.