Champions bow out as Rhode and Tullamore renew acquaintances in final 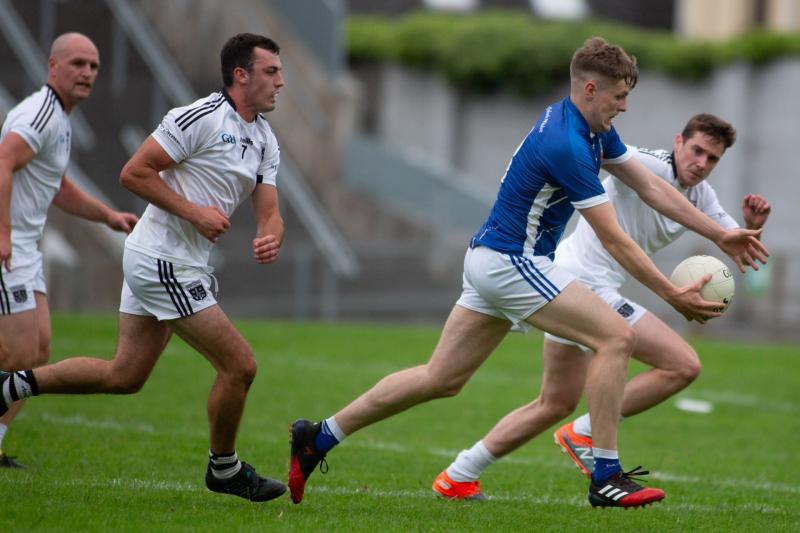 AS tension filled and drama packed game as you could possibly imagine ended with Tullamore advancing to the Offaly Senior Football Championship final after winning the first penalty shootout in a club game in the county.

Finger nails were chewed to the bone as the players engaged in the penalty shootout when extra time couldn't separate them and Tullamore eventually won 9-8 after sudden death – Ferbane had a kick to win it after Johnny Moloney blasted their 8th penalty over the bar but Shane Nally did likewise. Paul McConway, Oisin Kelly and Ciaran Egan then converted and when sub Sean Flynn put his over the bar, the champions were gone.

Tullamore had went first in the shootout with Shane Dooley converting and the quality of kicking was excellent as each side scored their first seven. Ciaran Burns, Johnny Moloney, Paul McConwaty and Ciaran Egan all converted for Tullamore with Joe Maher, Cathal Flynn, Shane Nally, Oisin Kelly and Sean Flynn replying for Ferbane. The same players had to take again in sudden death and Dooley and Burns and Maher and Cathal Flynn put theirs away before the misses occurred,

It was a cruel way for Ferbane to relinquish their crown but over the balance of the 80 plus minutes, the result was a fair one and the better side won. It has been an extraordinary journey for Tullamore who lost their opening two games and would have been gone had Cappincur not spurned a golden chance to beat Clara. They then found their form to beat Clara and now in true Tullamore style, they have taken full advantage of their breaks and play Rhode in the final.

It was a devastating way to lose but Ferbane didn't play anywhere near their full potential on the day. It just didn't quite happen for them as they made plenty of errors and they brought it down to the wire through sheer will power and determination. They probably should have been beaten at the end of both normal time and extra time and had Tullamore been in front at either of those stages, Ferbane could not have complained one iota.

Their final equaliser in normal time came five minutes into injury time and was a sensational free from Joe Maher right out on the right wing to make it 1-9 to 0-12. He displayed nerves of steel to loft the ball over the bar and his kick was particularly noteworthy as he didn't have one of his better days, trying very hard and doing plenty of good things but not as influential as he normally is. The pressure was intense as the unfortunate Sean Flynn had missed a golden chance a minute earlier – pulling an easier free wide at his near post. Flynn, a very skilful and honest young player, had only come onto the field in the 48th minute and it was a huge and questionable responsibility to give him that kick. You couldn't but feel sympathy for Flynn as he missed that last penalty kick but not one person in Ferbane will be pointing fingers at him over that and he was man enough to take on the responsibility of those kicks.

In extra time, Ferbane really should have been gone at the end of the first period and how they were level, 1-11 to 0-14 was one of the big mysteries of an absolutely enthralling evening. Tullamore practically owned the ball, laying siege to the Ferbane goal but their only reward was a brilliant Shane Dooley point and a free from the magnificent Johnny Moloney. Ferbane replied through Ryan Heavin and Kevin Nugent but Tullamore should have been home and dry as Michael Brazil flashed a great goal chance across the face of the posts and Luke Plunkett then missed a decent chance with the rebound falling to Luke Egan, who fumbled it when a goal seemed inevitable. Tullamore's dominance was noteworthy as they had played most of the first period with only fourteen men as Aaron Leavy had been black carded near the end of normal time.

In the second period, Tullamore looked to have taken control with two sensational points from Moloney but Ferbane showed incredible courage to keep at it, even though they were clearly out on their feet. Maher tapped over a free and then Cian Johnson, who once again showed lethal opportunism as he scored six points off limited possession, equalised. Ryan Heavin wasted a half chance for Ferbane and then Aaron Leavy floated over a super Tullamore point to put them a point up a minute in injury time.

Ferbane mounted one desperare last chance and aftrer Oisin Kelly was bottled up as he tried to get in on goal, he got the ball to Cian Johnson who resisted the temptation to go for goal and did the wise thing by pointing.

The tension and drama was incredible in extra time and the penalty shootout but before that, there was plenty of mediocre football. However, it was never less than honest and you couldn't take your eye off proceedings for a second.

Tullamore were very good at times, playing to their strengths, retaining possession well and not afraid to kick into space. They started with all guns firing and were thtree points to the good after just six minutes.

It was clear at this early stage that Ferbane were seriously vulnerable. They looked tired, possibly caused by their dual commitments with Belmont but for whatever reason, they were sloppy, dropping balls they would normally gather with ease and just not clinical. Oisin Kelly and Joe Maher missed chances as they struggled to settle and it was 14 minutes on before Johnson opened their account.

Tullamore were playing with the wind and deservedly led by 0-4 to 0-1, 0-5 and 0-6 to 0-2 and 0-7 to 0-3 before Ferbane finally found their form coming up to half time. And it was Cian Johnson who led their rescue act, scoring three lovely points to leave them trailing by 0-7 to 0-6 at half time and very much in it.

When Joe Maher got a point from play and the lively Cathal Flynn blasted a fantastic goal to the net to put Ferbane 1-7 to 0-7 ahead within a minute of the restart, it looked set up for them. However, they got careless again, making unfamiliar errors and having a couple of wides with Kyle Higgins unlucky to see his one go wide off the upright.

Tullamore were hanging on but they soon lifted the siege and then played their best football. They were outstanding for a ten minute period from the 40th to 50th minutes as they drove at their opponents with great intensity and pace. Ferbane were buckling at their knees as Tullamore kicked four without reply to lead bty 0-12 to 1-7 at the second half water break.

The manner in which Ferbane came back again was a tribute to their resourcefulness as they were hanging on by a thread. However, they once again got on top with Mark Cahill spurning a good goal chance before Maher pointed a free to cut the gap to the minimum with two minutes left. Six minutes of injury time was played and there was no shortage of incident with Shane Dooley having a wide from Tullamore from a position where he shouldn't have shot before Maher got that final free.

Johnny Moloney was the star man for Tullamore on a day when Michael Brazil didn't start and wasn't as influential as normal when he came on in the 34th minute – he clearly wasn't fully fit but should be okay for the final. Moloney's kicking from play and frees was one of the highlights of the game. He got eight points, five from play and his two in the second period of extra time when he got huge ones off both left and right just took the breath away – it showed the importance of being able to kick with both feet and while Moloney seems to favour his left a lot in open play, he took his two penalties with his right,.

He was matched by Cian Johnson for Ferbane. Johnson got six points from play and his finishing was out of the top drawer. He kept them alive in the first half and then after Tullamore got to grips with him for a lot of the second half, he came good again to help force the penalty shootout. He is a different player than Moloney and won't dominate games like the Tullamore man but his finishing and ability to manufacture the space for a shot is always a joy to watch.

Tullamore were very steady in the way they played. Paul McConway and Declan Hogan showed their experience in defence while Aaron Leavy once again showed great drive in midfield. However, the performances of some of their younger players will have delighted them. Ciaran Burns was a late replacement for Brazil and he had a really fine game, showing great movement and composure. Luke Egan once again impressed and his movement is also very good - even when things began to go a bit wrong for him, he continued to try and do the right thing and that is a good sign – while Shane Dooley did very well off the bench.

For Ferbane, it was a disappointing end to their reign as champions and it will be interesting to see how they bounce back. They were so close to getting to the final and almost got out of jail as Shane Nally had that chance to win it but it was a quite off colour display by them. Jack Egan, David Kelly, Kieran McManus, Cathal Flnn, Kyle Higgins and Oisin Kelly did well at different stages but Ferbane's error count was way higher than they needed and they will take this result on the chin.