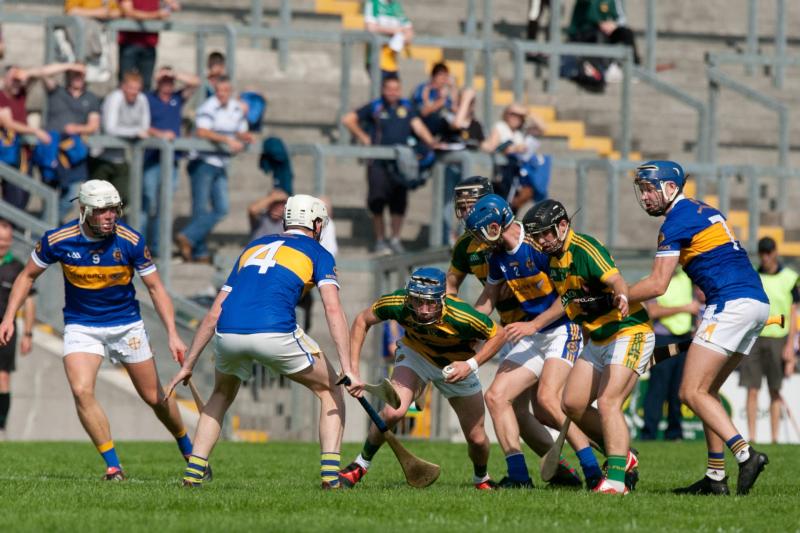 Having already secured a county semi-final spot, St Rynagh’s won this game with ease despite being reduced to fourteen men early in the second half with a late goal suggesting that the game was actually closer than it was.

The Banagher men will now face old rivals Birr in a county semi-final.

Things had been going to plan for the Banagher outfit until things took a dramatic turn early in the second half. In that period, Shinrone struck two goals and Joseph O’Connor was shown a red card for an off the ball incident. At this stage, things looked promising for Shinrone who were now three points in front with 25 minutes remaining.

Despite the numerical disadvantage, St Rynagh’s upped the game from then and picked off points throughout the second half to easily keep Shinrone at a safe distance.

While the scoreline was tight in the end, Shinrone’s final goal came in the final action of the game, five minutes into injury time.

The first half of the match was not a very memorable one, with St Brendan’s Park eerily quiet due to the continuing ban on spectators. St Rynagh’s led by 0-11 to 0-9 at the break and looked to be going through the motions, with two previous wins having already guaranteed them a place in the last four.

Shinrone on the other hand needed a win and results to go their way in the other group game between Ballinamere and Belmont.

However, despite that impressive start to the second half, once St Ryanagh’s regained the lead they always appeared in control.

What was most pleasing from a St Rynagh’s point of view, was their ability to pick off impressive scores, particularly two great long-range ones from Stephen Quirke to cruise past Shinrone.

The only downside for St Rynagh’s was the straight red card for O’Connor which will now rule him out of that semi-final encounter – unless he can win an appeal..