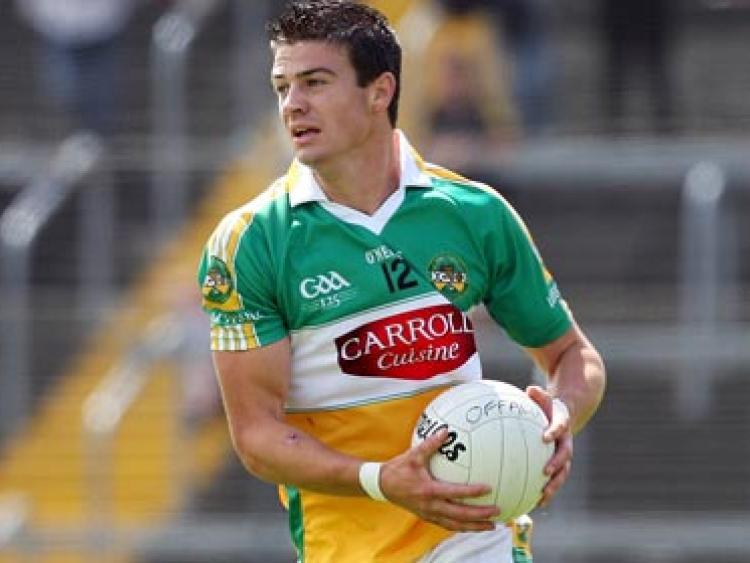 THERE is a lot of football to be played yet but Gracefield have clicked into a rich vein of form and they looked very impressive as they dismantled the challenge of Erin Rovers in Bord na Mona O'Connor Park today.

Gracefield's 4-11 to 2-8 win was very convincing but apart from the scoreline, the quality of football they played really commanded attention.

With the wind on their backs, they destroyed Erin Rovers in the first half and a 4-6 to 1-4 half time lead gave them a more than sufficient cushion, even though they had played with a strong wind.

Gracefield's win earned them top spot in the group, on scoring difference by just one point from Tubber while this defeat condemned a bitterly disappointed Erin Rovers to an early exit. Gracefield will meet Ballycumber in the semi-final while Tubber and Durrow clash in the other one.

Erin Rovers' defence had a torrid afternoon with Jack Walsh causing them ferocious problems in the first half and man of the match Jamie Evans taking them for 1-6 from play, and it could very easily have been 3-5 or 3-6 as he had a couple of other excellent goal chances. Two goal Stephen Flanagan also prospered in a flying Gracefield forward division.

Gracefield's second half performance was also very impressive. Erin Rovers fought with everything they had at the start of the half and had it back to six points, 4-8 to 2-8 at the water break. It looked like they could make it really interesting but the manner in which Gracefield controlled the closing quarter was utterly compelling. The outstanding Niall Smith got back in control at midfield and they played a very clever possession game.

Erin Rovers just couldn't get on the ball while they also seemed to run out of steam in that closing quarter and fitness seemed to be an issue for a couple of their players. Erin Rovers did fight hard but they came up against a vastly superior force who had huge incentive as this was a knockout game with the loser bowing out.

Relegated from senior last year, Gracefield are desperate for a quick return and them and Durrow have certainly been the two form teams so far in the championship,

Apart from brief flashes, it just didn't happen for Erin Rovers. Their defence were ran ragged at times while their midfield never got to grips with the influence of Niall Smith and their attack struggled to create chances with 1-5 of their 2-8 coming from Nathan Poland placed balls.

Gracefield played some fantastic attacking football with a strong wind on their backs in the first half and a beleagured Erin Rovers defence were eaten alive, living on their wits.

Gracefield came flying out of the blocks with 2-1 in the opening four minutes. The first goal came from Jason Slattery after he slid in to finish off Stephen Flanagan's half smothered shot and the second one was fortunate as goalkeeper Neville Dunne was adjudged to have been behind the line when keeping out Flanagan's shot from out the field.

Gracefield continued to torture their opponents and they were 2-4 to 0-1 up at the water break with Niall Smith giving them a real foothold at midfield and Jamie Evans and especially Jack Walsh on fire up front. They should have had a third goal when Flanagan punched a centre to the net but was penalised for being in the square though it was called back for a free that Walsh tapped over – there was no need for him to drift into the square after the Pullough defence had been ripped apart again.

Erin Rovers did settle down a bit as the half wore on, increasing their work ethic and putting in heavy hits. However, they were fighting an uphll battrle the whole way and Jamie Evans got a well deserved goal in the 23rd minute arfter a great Jack Walsh charge forward. They got a fourth goal in injury time when Stephen Flanagan was fouled and then stroked home the penalty.

Erin Rovers got a lifeline on the stroke of half time when awarded a very soft penalty after Andrew Buckley was adjudged to have been fouled and Nathan Poland converted – referee Martin Carty certainly didn't do Erin Rovers any harm in the game and with a 4-6 to 1-4 half time deficit and the wind to come, they had an outside chance.

Erin Rovers gave a much improved second half display and got on top in most sectors. A 34th minute Stevie Buckley goal after quite shocking Gracefield defending when they failed to deal with a long ball in gave Erin Rovers further hope. At the second half water break, they were still alive as they had the gap back to si x points, 4-8 to 2-8.

Gracefield got back on top in the third quarter, retaining possession very well and depriving Erin Rovers of the ball for crucial spells, A Jamie Evans point restored a seven point gap and he put eight in it with another excellent point as Erin Rovers ran out of steam. And their goose was well and truly cooked when sub Declan Cooney got a 55th minute black card just two minutes after coming on, heading to the sin bin for the rest of the game as Gracefield won pulling up.