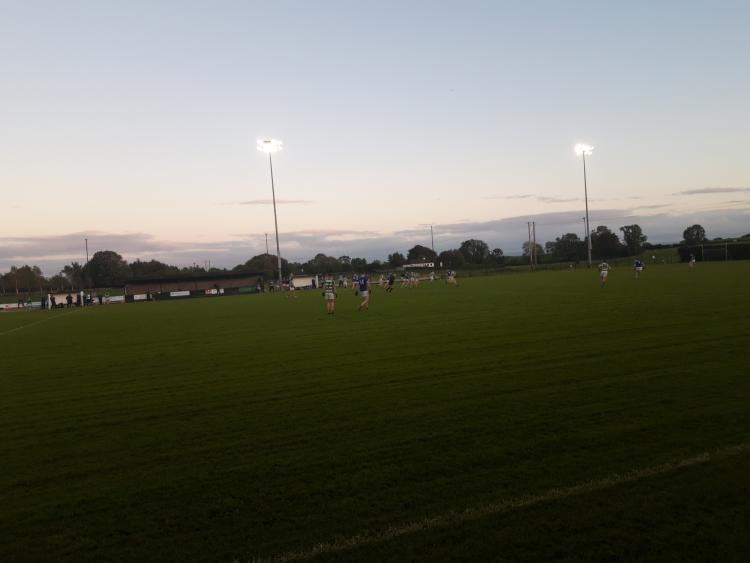 THE final scoreline may suggest a low scoring and dour tussle but ignore it completely. Yes it was low scoring, with a combined total of fifteen scores a triffle by modern standards but St Rynagh's and Ballycommon still served up a real helter-skelter, roller coaster of a game in Tubber this evening. Captivating and utterly engrossing, there was more than enough here to keep the attention focussed for the entire hour plus.

At the end of a ferociously contested encounter, St Rynagh's booked their semi-final place as table toppers in group 2 while Ballycommon go on as runners up – the Cloghan based club will face Clonbullogue in a semi-final that could provide one of the games of the year while Ballycommon will face a real tough test against an inform Kilcormac/Killoughey.

With Clodiagh Gaels losing to parish rivals Raheen in the other group 2 game, St Rynagh's would have survived with a defeat but they didn't know that at the time and they went about their business here in as full blooded and whole hearted manner as you can possibly imagine.

It would be stretching things to describe it as comfortable but from the start of the second quarter on, St Rynagh's looked like they were going to win this and as the evening wore on towards the final whistle, their victory was never really in doubt. You can't overstate the importance of a group win but this was a huge result for St Rynagh's and it may well prove to be a season turning one.

When they had to do it, they did it, making no mistake with a very competent, controlled and hard working performance. They won for two primary reasons – their attack converted a greater percentage of their chances than Ballycommon and they also proved to be that bit tougher, they worked that bit harder in the white heat of battle. There was not that big of a difference in the wide count – 9 for Ballycommon compared to six for St Rynagh's but six of Ballycommon's came in a dreadfully wasteful ten minute spell from the 10th to the 20th minute and ultimately, the game was won and lost here.

The St Rynagh's win was fashioned without two of their injured hurlers, Pat Camon and Dermot Shortt – who only cried off with an ankle injury sustained that day – but they had players standing up to be counted all over the field. Their team included three of their ageing war horses – Tomas Flaherty, Ger Rafferty and Gary Mahon may all be glancing anxiously at the approaching big 40 but they contributed powerfully to St Rynagh's cause here.

Flaherty was rock solid at full back, asked to marhsall a tall ball winner in Tom Mealiffe and succeeding very well at his task. Rafferty was immense at midfield – a long serving Offaly corner back in the 2000s, he showed his vast experience here, using his physique well but displaying great footballing intelligence and doing almost everything right. Gary Mahon also did well in the corner of the attack, converting two frees and getting a lovely second half point from play. Both Rafferty and Mahon looked to have began to wind down their adult careers as they regraded to junior a couple of years ago but have opted to return to their first team this year and are serving the cause very well.

Joe O'Connor had an excellent game at centre half back, showing some silky skills while his long range striking off the ground was a revelation – he got two excellent long range frees and another that dipped in at crossbar height just before half time led to their all important second goal from Graham Lynch's punch.

Lusmagh Lynch ended up as a pivotal figure in the game. He showed great speed, exciting skill and great direct running – it is a rarity for such a good footballer to emerge from Lusmagh though another of their players, Aidan Hanrahan did play some good football years ago. He also made a crucial intervention in the second minute, getting back onto his goal line to make an excellent block from Karl Dunne, who had drawn a fine sace from Evan Conroy after he charged through on goal – it was a great double chance for the Ballycommon midfielder.

Sean Dolan also had a really fine game for St Rynagh's, working terrifically hard, breaking tackles and using the ball well – though he did stray close to the line as he contested a couple of decisions with veteran referee Noel Cooney, picked up a yellow card for one hefty tackle and was spoken to on at least three occasions. Darragh Tierney and Sean Hanamy also showed up well for St Rynagh's.

It was a thought provoking defeat for Ballycommon. They were already through to the semi-final and maybe this resulted in them not being fully focussed, not having their eye completely on the ball. They worked hard and looked very good in sporadic bursts but it was a strangely unconvincing and subdued performance by them. They played too deep in the first half with too many forwards drifting back down the field while they still struggled to create clear chances when they pushed more forward in the second half. It just didn't happen for them on the day and they have absolutely no complaints at losing this.

Ballycommon have a lot of talent and should be strong enough to challenge for this title but it didn't look like that here. Aidan Bracken, Michael Conneely, David Dempsey, Karl Dunne, Conor Dunne, Brian Todd and Tom Mealiffe were among their better players but for most of them, it was in fits and starts rather than in the sustained manner they needed. Bracken really did try to rally the forces late on, Dempsey was tremendous early on and Conor Dunne was their most consistent player but overall, it was a poor display by Ballycommon, particularly when it came to creating chances.

Ultimately, Ballycommon were outfought by their opponents, failing to match their desire and ability to win dirty ball. Yet Ballycommon also deserve credit for their contribution to such an enjoyable game.

Early on, Ballycommon looked almost unstoppable as they tore Rynagh's asunder in the first few minutes, registering points from Conor Dunne (free) and David Dempsey while Karl Dunne broke through for the above mentioned goal chance. That, however, was as good as it got for Ballycommon – Rynagh's knuckled down and began to hit hard and often while Ballycommon seemed to return to their shell and stopped driving forward with the same intensity, which was ver strange.

Sean Hanamy's sixth minute goal put St Rynagh's 1-1 to 0-2 ahead and they led from here to the final whistle. Lynch's punched goal in the 30th minute made it 2-3 to 0-5 at half time and Ballycommon were left to regret some of their misses – their shot selection was wrong and their radar was off when they did get into position where they had to have a pop.

Scores were hard to come by in the second half with St Rynagh's outscoring the losers by three points to two – Graham Lynch missed a great early goal chance for them but they never looked like being caught. The closest Ballycommon could get was three points and that was only for a fleeting few moments at the start of the second half. For most of the half, Rynagh's had a cushion of four to five points and their defence was so good that Ballycommon didn't create the goal chances they needed.