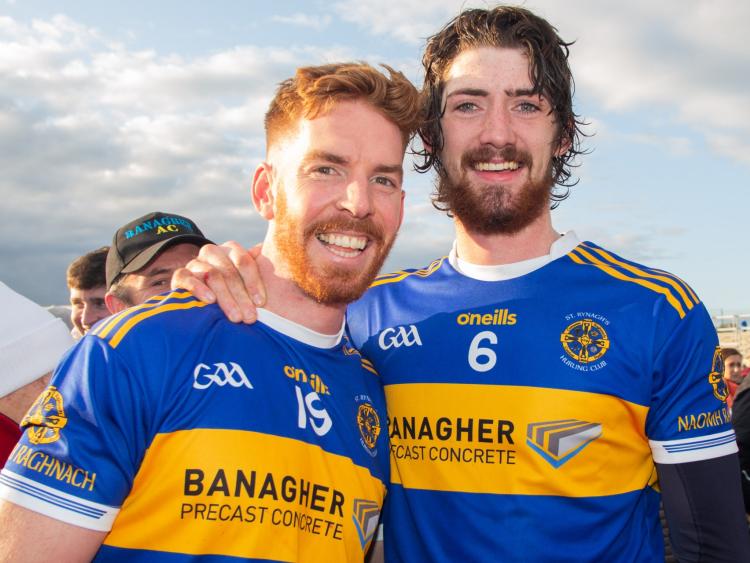 St Rynagh's secured the first semi-final berth in the SHC.

IT ended up being a bit tight for comfort but St Rynagh's continued their promising start to the season as they edged out Ballinamere in an enjoyable game in Bord na Mona O'Connor Park.

The champions will be concerned at leaving the door open for a late snatch and grab raid by a brave Ballinamere who never gave up but they still look to be in good health and this win sealed a semi-final place.

They were very good at times here, particularly in the first half when they laid a powerful foundation to lead by 2-10 to 0-8 at half time. They led by ten points, 2-13 to 0-9 five minutes into the second half and should really have sauntered home from here.

However, they struggled from here on and Ballinamere had the deficit back to four points on a couple of occasions late on. That is a very fragile lead in hurling and St Rynagh's can't be happy with the way they played in the closing quarter.. They made a few mistakes as well as missing chances and this helped Ballinamere fight their way back into it.

Credit also has to be given to Ballinamere. They have taken important steps forward this year in top flight hurling, drawing with Shinrone in a game they should have won and a four point defeat by a marquee team like Rynagh's was certainly no disgrace. They really dug deep in the closing quarter to make a game of it with Brian Duignan stepping up to the mark with increasing influence as it wore on but there was still no disputing the merit of St Rynagh's win.

Aaron Kenny emerged as the key player early on, giving St Rynagh's the initiative with a delightful goal after a great handpass in from Ronan Hughes in the 2nd minute. It was a great goal in its simplicity and execution and it gave St Rynagh's a 1-1 to 0-1 lead.

There was little or nothing between the teams for the next few minutes, though St Rynagh's were that bit more convincing. The Maher's Joe and Aaron got fine points for Ballinamere but Kenny also got an excellent point from play, floating it over from the left to give the Banagher club a 1-3 to 0-4 lead at the first water stop.

Kenny continued to make hay for St Rynagh's in the second quarter as St Rynagh's upped the ante. He gave a great cpass to set Luke O'Connor up for a clincially rajken 21st minute goal that gave Rynagh's a 2-5 to 0-5 lead.

St Rynagh's were clearly the better team in that second quarter as Ballinamere hung on for dear life – they had reason to be grateful to the Maher brothers, Aaron and Joe who amassed three points each from play in the first half. Stephen Quirke got two neat points for St Rynagh's before the break and they were full value for their 2-10 to 0-8 half time lead – it would have been bigger but Kenny and Luke O'Connor had poor wides.

St Rynagh's always looked like they would get there in the second half, even though Ballinamere gave it their best shot. Brian Duignan began to find his feet for Ballinamere, getting a couple of points from play but the loss of the inform Joe Maher to injury in the 35th minute was a cruel blow. Luke O'Connor began to come into his own for Rynagh's, winning a couple of frees and getting a fine point from play as they led by 2-17 to 0-13 at the second water break.

A Brian Duignan goal from a 49th minute penalty after Aaron Maher was pulled back reduced it to 1-14 to 2-17 and gave Ballinamere a glimmer of hope.

They remained competitive from here to the final whistle and St Rynagh's had grounds for anxiety when only four points separated them as it went inside the last five minutes. Particularly as their attack began to malfunction with Aaron Kenny and Luke O'Connor missing good chances while Treacy was wide with a free he would expect to convert. However, he did find the range with a 59th minute one after Kenny was fouled and Ballinamere needed goals to save them.

They never really looked like getting in for one, though Duignan's free reduced it to four again and it ended up as an unconvincing win for Rynagh's.