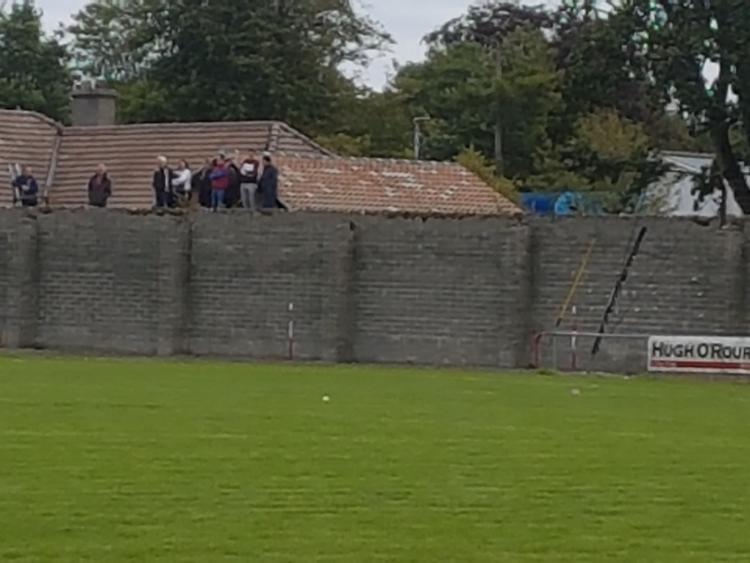 Spectators watching the K/K and Coolderry game from a roof outside the ground.

KILCORMAC/Killoughey produced a very mixed bag as they held on for a less than convincing one point win against a battling Coolderry in St Brendan's Park, Birr this evening.

The winners mixed the good with the average but got the result they desired to make it two wins out of two and put them on the verge of a semi-final berth.

0-16 to 0-9 ahead at half time after a fantastic second quarter, K/K were less than convincing in the second half. A mixture of them falling asleep early on and Coolderry rallying with typical fortitude saw this game go right down to the wire and K/K were not far off suffering a devastating defeat.

It was an enthralling game of hurling with two of the less heralded players taking the limelight from the usual match winners around them – K/K's Lochann Kavanagh had a great afternoon for the winners as he scored 1-3 while Daniel Miller made hay in the Coolderry attack, scoring 1-4 and almost inspiring his team to victory.

The teams were evenly matched early on but Kilcormac/Killoughey took absolute control in the second quarter and at half time, Coolderry were hanging on for dear life. They trailed by 0-16 to 0-9 at that stage and really should have been dead and buried as their goalkeeper Stephen Corcoran made a great 28th minute save from Thomas Geraghty, who really should have found the net from a few yards.

Coolderry did well early on with Mark Bergin giving them a foothold at midfield as K/K struggled to settle. Coolderry had two quick points in the first minute, trailed by 0-3 to 0-2 after five minutes and then got three on the trot through Brian Carroll (free), Cathal Parlon and Mark Bergin to lead by 0-5 to 0-3 after eleven minutes.

K/K grabbed the lead with three of their own, Kevin Connolly put Coolderry back in front with a great point from the right and were level at 0-7 each after 17 minutes but that was as good as it got for them in the first half. K/K played great hurling in the closing fifteen minutes. Thomas Geraghty, Cathal Kiely, Lochlann Kavanagh and Conor Mahon all pointed to put them 0-11 to 0-7 ahead.

Brian Carroll halted the Coolderry slide with a free but K/K got five of the closing six points for that six point half time lead. And it would have been more only for a few poor wides – they had 11 in the first half.

K/K fell asleep at the start of the second half, failing to get up to the tempo of the game as Coolderry went flat out. Points from Brian Carroll, Stephen Burke and Daniel Miller cut the deficit to three points and brought Coolderry back into it. K/K settled down a bit after this and led by 0-19 to 0-14 before Coolderry rallied again. A 12th minute tap in goal by Daniel Miller after a mistake by Conor Slevin and a point from Brian Carroll reduced it to a point, 0-19 to 1-15 and it was very much game on.

Again K/K provided the right answers and Lochann Kavanagh and Cathal Kiely (free) edged them three clear as it went into the last quarter. It could have swung either way late on and Coolderry were very close to a memorable win. They got it back to level terms, 1-19 to 0-22 with a lovely Daniel Miller point with six minutes left but the decisive moment was Kavanagh's neatly taken goal seconds later after Conor Mahon sent the ball in.

Coolderry fought with everything they had. Points from Barry Teehan and Carroll (free) reduced it to the minimum with two minutes left. A super Cathal Kiely point from distance gave them a bit of breathing space as it drifted into injury time before Stephen Corcoran's long free reduced it to a point again – he may have intended dropping it in and Coolderry didn't manage to manufacture a late chance as a relieved K/K held on.