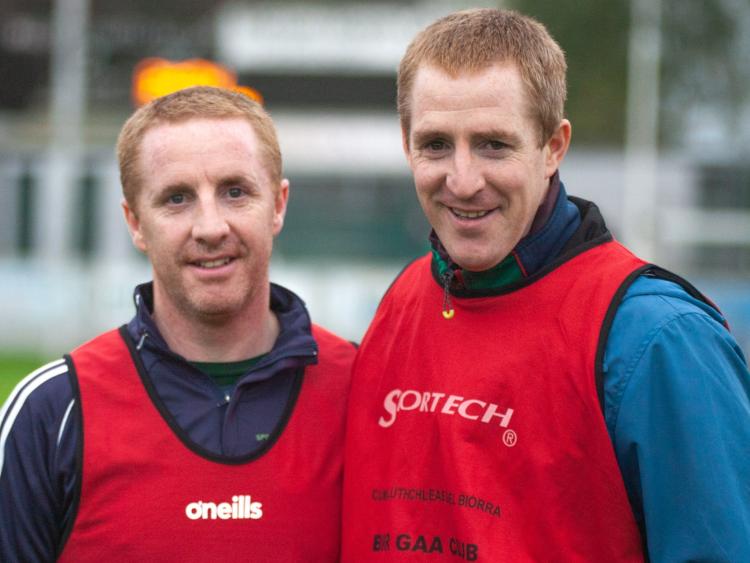 IT is a healty sign of a championship when there are no definite favourites and a number of teams with prospects of doing well. While St Rynagh's are the starters' favourites, it is very much in the marginal category and this year's Senior Hurling Championship looks to be wide open.

St Rynagh's did well to regain the Sean Robbins Cup last year, pipping Birr in a dramatic final. They have a very solid team, strong in the right places and they are the team to beat but there are a few with the ability to take them off their pedestal.

You can probably divide this year's Senior Hurling Championship into three tiers. The first tier of the main contenders consists of St Rynagh's, Kilcormac/Killoughey and Birr. The second team of teams with genuine aspirations who could get there includes Belmont, Coolderry and Shinrone and the third tier is the two rank outsiders, Seir Kieran and Ballinamere – a title win for either of those would be a big shock.

The championship has a fascinating look about it. St Rynagh's, Kilcormac/Killoughey and Coolderry have a recent tradition of winning, they know what it takes and fear won't come into the equation for them if they get the opportunity. Birr also have a huge tradition but now have only a small few players with senior hurling medals and the pressure is mounting on them to win one after their dominance in the 1990s and 2000s.

Coolderry are just outside my top tier as they were swept aside by Belmont in the quarter-final last year and a number of their key players are now in their end game. However, they are well capable of winning against the head and there is absolutely no one in Offaly who will take them for granted – Coolderry's tradition has earned that respect.

A lot of interest will focus on Belmont and Shinrone. Both have made great progress in recent years, have some of the best young hurlers in Offaly and have developed into genuine contenders. They are exciting to watch and Belmont have been particularly close to reaching a final while Shinrone have also begun to knock on the door.

With respect to the more traditional forces in the championship, Offaly hurling could do with a boost, something new and the emergence of a new team would provide an injection of excitement and interest.

It may not happen but both Belmont and Shinrone present strong credentials. The biggest problem they face is not the quality of hurler at their disposal, that is there, but actually making the next leap and beating a big team in a semi-final. It is very hard for a club to make that first breakthrough but it is a measure of the progress in both Belmont and Shinrone that this is feasible at the moment.

Ballinamere could be the next club to make that leap forward. They have won minor and U-16 titles and have some of the most promising emerging hurlers in Offaly at the moment. However, they are behind Belmont and Shinrone in their development process at the moment and it is all about making progress, taking baby steps forward. A victory in the group stages this year would be an important achievement for Ballinamere and would give them confidence for the future but that will not be easy in a difficult group.

Seir Kieran should hold their own and they were delighted to win the Senior “B” Hurling Championship last year after relegation the previous year. It is hard to see them having enough to win a championship at the moment but the fact that there is no relegation this year (the championship goes up to ten teams in 2020) eases the real serious pressure on them (as well as Ballinamere) and it will be interesting to see how they perform.

There is huge pressure on Kilcormac/Killoughey this year. They have had a great run of success since their 2012 breakthrough win but they have proven beatable in big games in recent years after an initial three in a row when they looked unstoppable. This is a sort of make or break year for this golden team and if they don't add a fifth title, it could signal a changing of the guard with the introduction of new talent crucial. They will be there or thereabouts.

It will be very interesting to see how Birr perform. They were so close to winning last year and that will boost their confidence but it is far from certain that they will get there this year. They do look to have turned a corner after a barren few years but this year will tell a lot. They won't be far away but there are doubts there.

Both groups look to be well balanced. Group 1 consists of Birr, Kilcormac/Killoughey, Coolderry and Seir Kieran. Seir Kieran are the outsiders here, though they are very much capable of shocks and it will be interesting to see how Coolderry perform. With two going straight into the semi-finals, one of the big three will be gone and it means that the stakes are huge in every game.

It should make for compelling viewing and at the moment, Kilcormac/Killoughey and Birr are the favourites to get through.

Group 2 will be ferociously fought with St Rynagh's the title favourites and Belmont and Shinrone straining at the leash. One of these will be gone and the margin for error is almost zero here. Ballinamere also have to be respected and they could well have a big say in what happens here – they are capable of an upset though it is difficult to envisage them finding the consistency to get out at the moment.

The possibility of St Rynagh's biting the dust early can't be ruled out and their opener against Belmont will tell a lot about their well-being. The form book of recent years suggests that St Rynagh's and Belmont will come out but Belmont have dual commitments to juggle and Shinrone will also fancy their chances.

St Rynagh's have the ability to win back to back but there are a lot of teams who can beat them on any given day and it should make a great championship.