They claimed victory in the much-delayed 2018 final 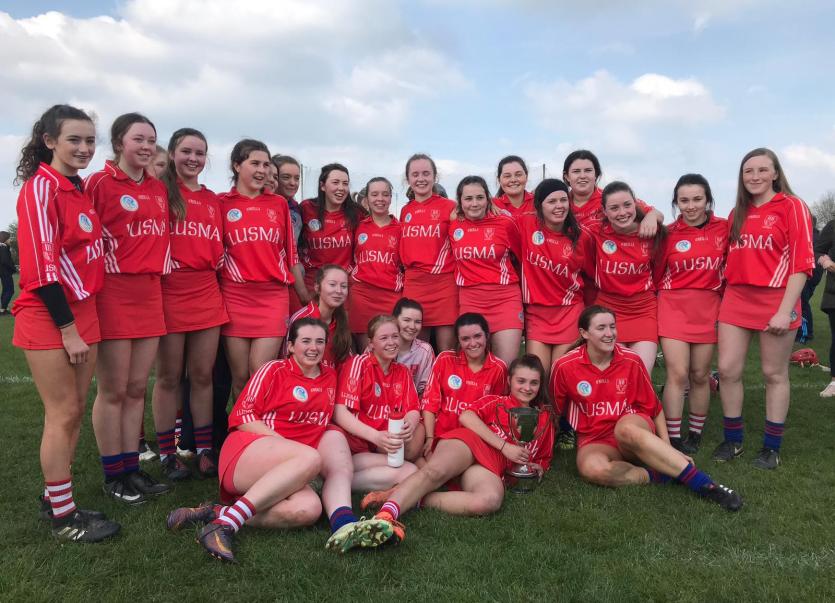 Goals win games is the old cliché and that was certainly the case for Lusmagh/Drumcullen as two crucial goals from the stick and foot of Sasha Connolly were the deciding factor of the game.

Played in glorious sunshine in Carrig and Riverstown GAA club, the game had a real sense of summer championship fever with fast, physical camogie. The first score of the game came from a great play with Kaitlyn Kennedy and Cathy Dermody opened the scoring account for Lus/Drum setting the pace for a very intense fast game.

St.Rynaghs found it very hard to transfer the ball from defence to attack under constant pressure from the Lus/Drum forwards in the opening ten minutes. There was a slight breeze in favour of St.Rynaghs in the first half which aided Ellen Gilligans puckouts that were travelling over 70 yards.

Kaitlyn Kennedy added her second point of the game when Laura Clancy’s tackle resulted in a yellow card for the corner back and Kennedy pointed with ease in front of the posts. The first goal chance of the game came when centre forward Elaine Troy made a darting run for the goals however Ciara O’Connell for St. Rynaghs blocked her shot and cleared the ball. This clearance landed to mid-fielder Helen Healy whose initial shot dropped short, however, Sasha Connolly smashed the ball to net when the ball landed perfectly in her path and the nippy corner forward rose and struck to score the first goal of the game.

St.Rynaghs got their first score of the game when Louise Mannion made a beeline run from midfield where Kate Kenny found the mid-fielder to split the posts. St.Rynaghs started to come into the game after this point and started to win possession around mid-field half-back line.

However, this would only serve as motivation for Lusmagh/Drumcullen with Kaitlyn Kennedy point another placed ball, on the back of this the wing-forward received a yellow card and St.Rynaghs were awarded a free. With the wind on their backs, a huge free landed into the danger zone for St.Rynaghs. Keeper Maria Horan stopped the original shot however Sarah Pearl was on hand to slot the ball over the goal line and St.Rynaghs were now back in the game with only two points separating the sides. Kaitlyn Kennedy added her fourth point of the game before referee Martin Walsh blew the half time whistle.

The magnificent fare continued in the second half. Lus/Drum began the second half with intent and registered two points on the board through Kaitlyn Kennedy. With their tails up Lus/Drum began to pull away with the game. One of the two scores of the game was from the stick of Amy Byrne, the centre back took a free 80yards from the goals and with ease, the number six pointed to put five points between the teams.

With no wind or rain to deal with, this game provided end to end entertainment in a high scoring affair for this time of year. Then came the Lusmagh/Drumcullen onslaught. A pass from Cathy Dermody set up Sasha Connolly who raised the green flag for the second time of the game when Ellen Gilligan intercepted the pass however Connolly broke onto the ball to kick it to the back of the net.

Moments later Charlotte Quegan scored the second score of the game as the full-forward struck the ball from an impossible angle and tumbled out of the end line while striking to deceive Gilligan between the posts. Substitute Clodagh Leahy wasn’t on the pitch two minutes before she pointed from a Helen Healy pass as the hot weather took a toll on both the teams, Lus/Drum had plenty of fresh legs to change things up in the second half.

St.Rynaghs had left it too late for their comeback as the ever-determined side pulled a goal back when Anna McGuckin flicked a goal mouth scramble over the goal line. Kate Kenny did her utmost to bring her side back into the game with a point from play. With eight minutes to go Lusmagh/Drumcullen were in the final straight as Kaitlyn Kennedy fired another point over the bar.

St.Rynaghs hit a slight purple patch in the final minutes as substitute Shannon James immediately made her presence known with batting the ball to the net in the closing stages of the game.

Lus/Drum showed their mental fortitude to battle back though, Helen Healy pulled all the strings in midfield and played a captain’s role throughout the game and even in one tackle, blocked her opposition with her hand. The final score of the game was pointed by Kate Kenny however this wasn’t enough as Lusmagh/Drumcullen were crowned champions with five points to spare.