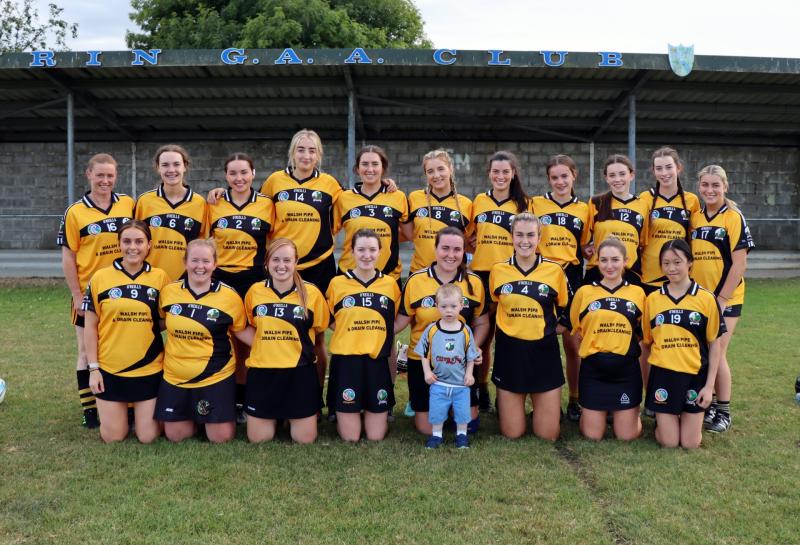 The St Sinchills team that played Kinnitty in Killurin on Saturday evening (Photo by John Gavin).

Saturday evening saw the clash of familiar rivals, St Sinchill's and Kinnitty in Killurin in what promised to be a tight affair.  Both teams continue to be unbeaten in the competition after St Sinchills impressively dug out a draw in their last match against St Cillians having been 5 points down going into injury time, while Kinnitty eased past Shinrone.

It was Kinnitty that got off to a dream start when Laura Spencer flashed the ball past Roisin Keenaghan in the St Sinchills goal.  St Sinchill's responded well however with Jean Brady converting two frees in quick succession.  A point from Patrice Delaney left Kinnitty leading by two points but points from Brady, Sarah Dillon and Bridin Walsh put St Sinchill's in front for the first time in the game.  As the teams fought for every ball it was Kinnitty who hit a mini purple patch next with two frees from markswoman Delaney to regain the lead for her team.  A point from Aoife Bergin and another free from Delaney stretched the Kinnitty lead to 3 points with 20 minutes gone.  A brace of points from St Sinchill's left the minimum between the teams but Kinnitty finished the half stronger when they hit four points without reply to lead 1-9 to 0-7 at half time.

When play resumed, this time it was St Sinchill's that got the dream start when Rachel Dillon finished the ball to the Kinnitty net much to the delight of the home supporters.  Kinnitty responded immediately with Delaney hitting over two frees in the space of a minute.  Jean Brady pointed from a free before a high ball in from St Sinchill's was again fielded by Rachel Dillon and she made no mistake in driving the ball into the Kinnitty net to level the scores.  Again Kinnitty responded well to a St Sinchill's goal when Leanne Mahon restored their lead when she hit over.  Points from Delaney and Rachel Scully followed before Scully hit an excellent goal for her team to leave Kinnitty leading by 5 points mid way through the second half.  Four minutes later and another point from Delaney stretched the Kinnitty lead further.

With 10 minutes left on the clock St Sinchill's were thrown a life line when they were awarded a penalty.  There was a delay in the penalty been taken due to an injury to Kinnitty's Rebecca Carroll and when Jean Brady took the penalty it was saved by Alannah Dooley.  The young Kinnitty keeper impressively made it a double save as she blocked a second St Sinchills attempt before Kinnitty cleared the danger.

But as St Sinchill's showed in their previous match they are never a team who know when they are beaten.  Shortly after the penalty, the experienced Brady hit a brace of points.  Minutes later she found herself standing over a free near the 45 metre line and just as she had done against St Cillians, a long distance free from her found the net and the scores were level with the game now in injury time.  St Sinchills had their tails up and a converted free from Brady gave them a precious lead with time ticking away.  While St Sinchill's had the momentum Kinnitty did get one last chance when Patrice Delaney was fouled near the 45 metre line and the Kinnitty woman showed great calmness in pointing the free to level the scores in what was the last attack of the game with the final score reading St Sinchill's 3-12, Kinnitty 2-15.

On Monday afternoon hours before the other fixture in the competition was due to be played, Shinrone announced that they were withdrawing from the competition as a result of long term injuries to a number of players and other players being unavailable.  As a result of this their fixture against St Rynagh's was cancelled.