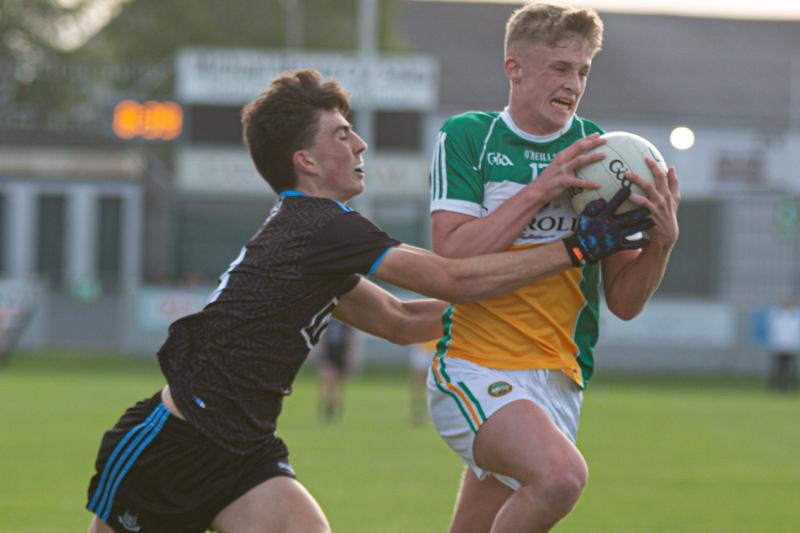 TULLAMORE secured their place in the semi-finals of the Offaly Senior Football Championship with a comprehensive 14 point victory over neighbours Cappincur in Geashill on Sunday afternoon.

The defeat sends Cappincur into the relegation play off when they will face Durrow in a bid to retain their place in the top tier of Offaly football for 2023.

Tullamore showed their champion qualities in this game and controlled proceedings for the majority of the hour.

Bar a short period in the middle of the first half when they hit a number of wides and saw Cappincur cut their four point advantage to just two, Tullamore dominated and after the first half water break, they quickly restored their control adding two points, quickly followed by a goal and there was no way back for Cappincur from there.

Tullamore led by 1-7 to 0-3 at half time and a second goal six minutes into the second half strengthened their grip on the game and they gradually pulled away over the remainder of the game.

Tullamore were very sharp from the off and eased into a 0-4 to 0-0 lead after just eight minutes. They were slick and clinical in that period and they were the openings well to pick off their points. Their first five points all came from different players and in all seven players scored from play over the hour, with just two points of their 2-14 tally coming from frees.

Cappincur weren't short on possession in that opening half but they found it much more difficult to break down the Tullamore defence than was the case the other way around. Cappincur kept their passing movements going but too often they lost the ball before they could get a shot off. Crucially, they also dropped four shots short into the goalkeeper's hands in that first half with another similar effort dropping short at the start of the second half. Turn those efforts into scores, and it would have been much closer at half time.

Cappincur faded more as an attacking force after the break and their first score from play in the half didn't come until the hour mark and by that stage the game was well and truly over. They also kicked some poor wides and ended up with a tally of 10.

After their good start, Tullamore did kick a number of wides, with five inside the first quarter, but they made more of their opportunities after that and only added three more in the remainder of the game. They were better at creating openings and putting the shooter in the right position and they took their scores well.

That was evident from the very start as Michael Brazil kicked them into the lead in the second minute. Corner back Declan Hogan stormed forward to add another a minute later and Harry Plunkett and Nigel Bracken finished good moves to make it 0-4 to 0-0 after eight minutes.

Immediately after the water break Luke Plunkett steadied Tullamore with a point and Declan Hogan got forward to add his second. Then in the 22nd minute Tullamore strung a fine move together from deep in their own defence and it finished with Harry Plunkett shooting low to the net. He added a further point and they threatened more goals but two good moves ended when Cappincur intercepted the final pass. Gerard Treacy added a further point to leave it 1-7 to 0-3 at half time, with all the scores in that first half coming from play.

Tullamore had an early goal chance in the second half but Enda Daly saved well from Aaron Leavy. Sean Courtney reduced the gap to six with a pointed free five minutes into the second half but just over a minute later Tullamore did get a second goal. Johnny Moloney made a long run from defence before offloading to Luke Bourke and his pass across the square found Luke Plunkett and he shot to the net.

Sean Courtney pointed another free but Tullamore hit the next five points in a row, three from Harry Plunkett (two frees) and two from Luke Plunkett. Sub Enda Ravenhill got Cappincur's first point from play in the half just on the hour mark but Dan Fox and Mike Fox added injury time points for Tullamore to give them a 14 point victory margin.

Tullamore corner forward Harry Plunkett had a terrific game. He finished with a tally of 1-5, all bar two points from play, and kicked points with both left foot and right foot. He showed well for the ball and for a young player it was a fine performance.

Tullamore's first goal was the culmination of a lovely team move and came at a crucial time. After a bright start Cappincur had halved Tullamore's early lead but after the water break Tullamore picked it up again and added two points when Cappincur attacked. A high ball into the square was punched out by goalkeeper Corey White. It was won by Johnny Moloney and Michael Brazil, Diarmuid Egan and Nigel Bracken carried it on with the latter picking out Harry Plunkett and he shot to the corner of the net. The result was never in doubt after that.

This was a fairly straightforward game for Fergal Smyth to referee. There were only five frees in the whole of the first half and while he had to whistle a little more after the break, there was never any contentious issues and he didn't have to reach for any cards.

Tullamore have secured their place in the semi-finals and their display was a little ominous for the remainder of the teams left in contention. They went about their game with ruthless efficiency and while they wasted some opportunities in the first half, they were patient in their build up and always waited for the right opportunity to strike. They will certainly be earmarked as favourites to retain their title.

Tullamore advance directly to the semi-finals and await the outcome of the quarter finals to see who they will meet. Cappincur face Durrow in the relegation play off to see who retains their senior A status for next season.

The Geashill venue was very well prepared for this contest. The pitch was in good order and the firm surface did catch out players on occasion with a higher bounce than expected. Parking was very well controlled and there were plenty of stewards on duty to ensure everything ran smoothly.

Cappincur; Ger Treacy and Sean Courtney (both frees) (0-2 each), Peter Daly and Enda Ravenhill (0-1 each).