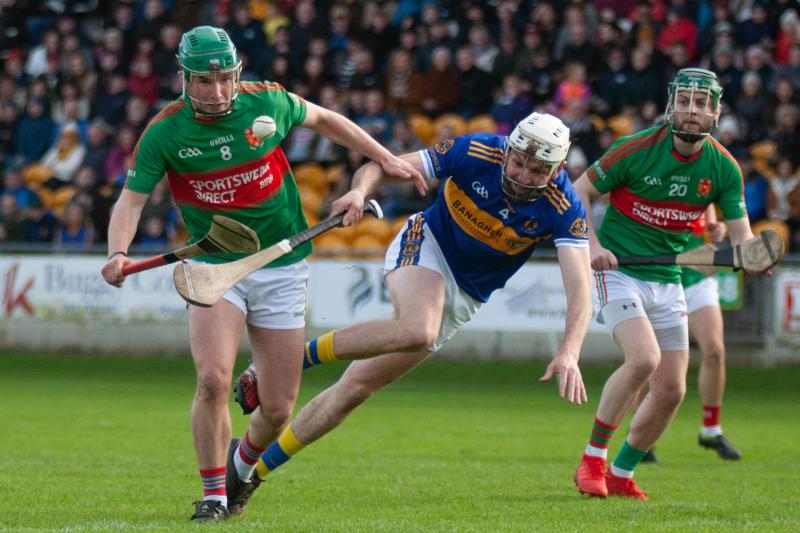 EOGHAN Cahill was the star of the show for Birr as he hit 16 points as they overcame a determined challenge fom Clodiagh Gaels to secure their first win of the championship campaign in Kinnitty on Saturday evening.

Birr pulled away in the second half after a closely fought first half which saw the sides level on six occasions. Birr did finish that half the stronger and three late points helped them to a 0-11 to 0-8 lead at the interval.

Clodiagh Gaels did score the first point of the second half but from there Birr gradually began to pull away and Clodiagh Gaels struggled for scores in that half. They did have a great chance of a goal with six minutes left which could have got them back into the contest, but having found himself free inside the defence, Joey Keenaghan somehow managed to fire wide as Brian Mullins advanced and their chance was gone.

Clodiagh Gaels did start brightly and they troubled Birr in the early stages. Twice they led by two points but Birr gradually drew them in but it did take them until the 28th minute before they hit the front for the first time.

In the second half Birr were the dominant side and they were content to pick off their points and stretch their lead. Eoghan Cahill was central to much of that good work and he fired over some lovely scores from both play and frees.

The victory keeps Birr in contention for a place in the knock out stages and their final group game against Kinnitty will determine who will claim the final place in the quarter finals and their destiny is in their own hands.

This was Clodiagh Gaels final group game and while they have lost all four games, they have been competitive in them all. They will face into the relegation play off hoping to avoid an immediate return to Senior B ranks and either Coolderry or Seir Kieran will provide the opposition in that game.

After their disappointing display against St Rynagh's Birr will be pleased to have got back on track in this game. It was a much better team performance and while they is still room for improvement there was more intent in their play in this game. They still rely a little too much on Eoghan Cahill for scores but at least they got better contributions in this game with Lochlann Quinn and Colm Mulrooney both scoring good points.

They were very sound defensively with Oisin Murphy playing well at full back and Rory Carty and Barry Harding also impressing in defence. Lochlann Quinn and Brendan Murphy both did well in the middle of the field and along with Eoghan Cahill, Colm Mulrooney and Paul Cleary made strong contributions in attack.

Clodiagh Gaels started the game well but they weren't as effective as the game went on. Eight of their 12 points came from placed balls and they will need greater scoring power if they are to survive the relegation play off.

Dylan Hyland did well in defence before going off injured while Clint Horan and Cathal Brady also did well in this section. Sean Brady and Joey Keenaghan worked hard in the middle of the field with Keenaghan moving into attack in the second half where David Buckley, Liam Langton and Cathal Curran tried hard.

Birr were off the mark when Eoghan Cahill pointed inside the first minute but as they wasted some other early opportunities, Clodiagh Gaels levelled through Cathal Curran and Cathal Brady (free) and Sean Brady put them two ahead by the ninth minute. Lochlann Quinn pulled one back for Birr but Liam Langton restored the two point advantage from a free.

Brian Mullins' long puck out found Eoghan Cahill and he picked off a great point from the left wing and Lochlann Quinn got his second to level matters after 13 minutes. Liam Langton and Eoghan Cahill exchanged a brace of pointed frees before Colm Mulrooney put Birr ahead for the first time after 27 minutes. Liam Langton won the puckout and levelled matters for the final time before Eoghan Cahill pointed three frees in succession to give Birr a 0-11 to 0-8 interval advantage.

Cathal Brady reduced the gap from a free a minute after the restart but Eoghan Cahill quickly replied from play and then added a free. Birr had a chance of a goal when Morgan Watkins challenged goalkeeper Kieran Coonan for a loose ball and when the ball bounced free Sean Ryan pulled first time but the ball flew over the bar when it could just as easily have gone under.

Liam Langton's free kept Clodiagh Gaels in touch but three points in a row from Eoghan Cahill (two frees) gave Birr some breathing space. Joey Keenaghan added another for Clodiagh Gaels but Lochlann Quinn quickly replied for Birr. Cathal Brady's free after 49 minutes proved to be Clodiagh Gaels' final score of the game but they did have further chances.

After Eoghan Cahill put Birr seven up from a '65', Clodiagh Gaels had their best chance when Mark Dillon found Joey Keenaghan all on his own well inside the backline but Brian Mullins advanced quickly as he turned to shoot and somehow the ball flew wide. Sean Brady also had a goalbound shot well saved by Brian Mullins, while he also blocked a late free from Joey Keenaghan and Barry Harding did similar with an effort from a Liam Langton free. At the other end Eoghan Cahill added two more from play and wrapped up the scoring with a point from a free to leave Birr 10 points clear at the final whistle.

An easy one here. Eoghan Cahill was the star for Birr with 16 points, six of them from play, and some of them out of the top drawer. He was central to most of Birr's best moves and was the big difference between the two teams.

Eoghan Cahill got some lovely scores and among the best was his second point when Brian Mullins' long puck out went down the left, where Cahill won the ball and under pressure near the sideline lofted over a great point.

Kieran Dooley kept control of proceedings throughout. Some Clodiagh Gaels supporters weren't happy with some of his decisions and Birr may have got a couple of soft frees late in the first half, but overall he did a good job and treated both teams equally. He consulted well with his officials and was quick to stamp out any potential flashpoints.

Birr got their season back on track with this win. Following defeats to Kilcormac/Killoughey and St Rynagh's, they knew any further setbacks would probably end their interest in the championship. They gradually grew into the game and were the dominant team in the second half. Having failed to score a point from play until injury time in their last game, they were quick off the mark in this one with a point inside the first minute and they got a much better return from play on this occasion, although the dependence on Eoghan Cahill for scores might be still a concern.

Birr face Kinnitty in their final group game when a place in the quarter finals will be up for grabs for the winners. Clodiagh Gaels have finished their group games as they have a bye in the final round and they will face either Coolderry or Seir Kieran in the relegation play off.

The Kinnitty venue was in very good condition for this contest. The pitch looked well and there were plenty of stewards on duty to look after parking and other arrangements.