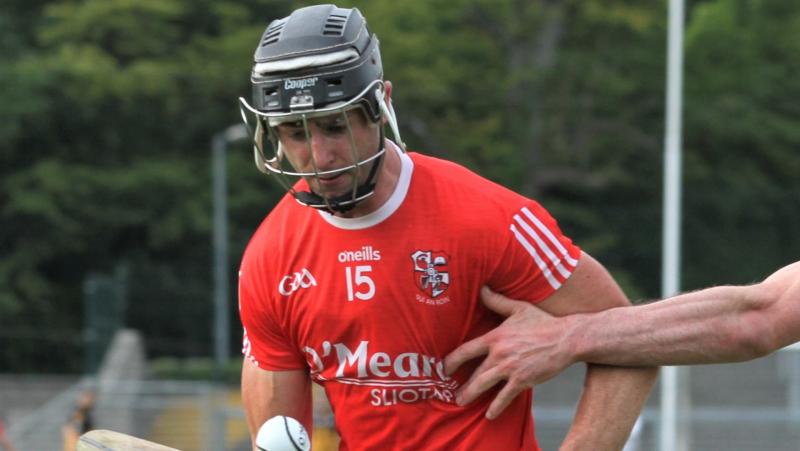 THERE was no shortage of drama as Shinrone rallied late to send Coolderry packing in the Molloy Environmental Systems Senior Hurling Championship at Birr on Saturday evening.

Leading by four points with eight minutes left, Coolderry were heading for the win that would have kept their season alive – even if they would have needed Belmont to beat Shinrone in the final round and them to beat Seir Kieran to get them through.

At that stage, it was difficult to envisage anything other than a Coolderry win. They were full value for their four point lead, were winning the physical exchanges and exerting a quite significant foothold on proceedings. It also looked like Coolderry would get there as Shinrone were not really at the races.

Unlucky to be trailing by 1-11 to 1-8 at half time, Shinrone had offered very little in the second half up to the closing ten minutes. They struggled to get going and while a defeat would not have been fatal to them, their general lack of purpose was surprising – they hit some very poor wides in the second half, with seven in all.

Yet with defeat looming, they rallied powerfully. A Dara Maher point from play and a free got them back to two points with six minutes left and all of a sudden, Coolderry were gasping for air. Adrian Cleary had a dreadful wide but Coolderry were out of steam. Ciaran Cleary reduced it to the minimum after brilliantly winning the ball on the edge of the square in the 59th minute and moments into injury time, Killian Sampson slotted over the equaliser from a free.

A draw would have done Shinrone and put Coolderry out. Conor Molloy had a wide for Coolderry and after Adrian Cleary had another bad wide, he then fired over a superb winner from midfield in the 62nd minute.

Now Coolderry needed a goal and they almost got one as Eoghan Parlon was fouled while bearing down on goal. The ball fell to Kevin Connolly who tapped to the net but referee Joey Deehan had the whistle blown and awarded a 21 metre free – it was very close to a penalty but Deehan ruled that the initial foul on Parlon occurred outside the area. Powerful hitting goalkeeper, Stephen Corcoran came up the field to take it but Brian Carroll took on the responsibility, after the sideline had an opportunity to issue instructions. As Corcoran walked away, taking his helmet off, Carroll's shot was saved and then cleared. The final whistle was blown and Coolderry's season was over.

It was a dramatic end to a strange sort of game. It was entertaining and very keenly contested, especially by Coolderry but it never truly sprang to life. There were times when it lacked real intensity but there were other spells when tempers were frayed, strokes were pulled, heavy hits put in and players went close to the line.

It was a big win for Shinrone and they play Belmont with the winners going into the semi-finals – a draw will do Belmont. They have plenty of room for improvement but they are where they want to be. They had fine performances from Dan Doughan, Dara Maher, Luke Watkins, Adrian Cleary and Ciaran Cleary. Ciaran Cleary was particularly effective, winning great ball and showing great physicality at full forward, even if the finishing product was not always there - Shinrone's win was noteworthy as the Sampson's, Killian and Jason were not at their very best, though both did contribute.

As you would expect with an early exit staring them in the face, Coolderry emptied the tank and they were the better side for a lot of this game. Ultimately, they hadn't the legs to get the job done though two of their elder statesmen were a big factor in them going so close – Kevin Brady was immense as he hit Shinrone with everything he had, both at full forward and out the field in the second, scoring two points, before going into the red and being replaced with six minutes left. Coolderry should not be blaming Brian Carroll for this defeat either as he has given such great service and also played well here, particularly in the first half when they needed leadership. Elsewhere, Stephen Connolly, Stephen Burke, Gearoid McCormack, Eoin Ryan and Eoghan Parlon impressed for Coolderry.

There was very little between the sides in an entertaining first half and under pressure Coolderry were delighted to go in with a 1-11 to 1-8 lead at the break.

It was an important lead for them and they owed it to an Eoghan Parlon goal two minutes into injury time – Parlon raced clear and finished confidently after Stephen Burke brilliantly won and cleared the ball in defence.

Prior to that, the sides were very closely matched. A good Ciaran Cleary goal gave Shinrone a 1-1 to 0-3 lead after four minutes. They led by 1-5 to 0-4 after 11 minutes but three points in a row from Brian Carroll, Kevin Brady and Eoin Ryan got Coolderry back to a point. Shinrone led by two points on three other occasions before Kevin Brady and Carroll (free) levelled it up for Coolderry and that Parlon goal gave them the lead.

Dara Maher got the first two points of the second half, one from play and a “65” but Coolderry got on top after this. They got back three points in front on two different occasions before Brian Carroll's free in the 51st minute put Coolderry 1-15 to 1-11 ahead and in sight of victory before it all unravelled late on.

Dara Maher (Shinrone): Dara Maher had a very good game for Shinrone. He converted a few frees, got two fine points from play and handled his defensive duties very capably.

Once again Joey Deehan had a good game. He was always in control, though he had to be on his toes in the second half and there were a few questionable decisions. Coolderry's Stephen Connolly should have got a yellow in the second half for a tackle that took Adrian Cleary out of it as he raced for the ball. There is a case for having the black card in club hurling and if it was, Stephen Burke would have got one for fouling Ciaran Cleary as he set his sights on goal in the 60th minute for the free that led to Shinrone's equaliser but he got away with yellow. Coolderry will feel the advantage should have been given for Kevin Connolly's equalising goal – Deehan had the whistle blown before Connolly got the ball, though it had to have been very close to a penalty.

Coolderry's last gasp free was a huge moment. They had to go for goal but Shinrone defended Brian Carroll's strike and the game was over.

Birr was in excellent condition and they hosted the game well with several members staying back even though they were playing senior hurling in Kinnitty. There weren't neutral linesmen and they really needed to be provided in Tullamore and Birr – there is a shortage of referees but even neutral “civvies” would be better than competing teams providing them. In the second half, Conor Molloy went down after an off the ball challenge from Donal Morkan. The Coolderry linesman called the referee but Joey Deehan rightly couldn't be guided by him and went to his umpires, showing a yellow to Morkan.

Coolderry's demise. They have a huge record in Offaly and have won the most titles. They were beaten in the final last year but it didn't happen for them this year and they are gone early. They may now enter a transitional period. Kevin Brady and Brian Carroll are near the end of their careers and as they wait for new talent to emerge, Coolderry will have to make sure they don't have a particularly bad year and be relegated as they wait for new players to emerge – they will have to get their eye back on the ball and beat Seir Kieran in their last game to stay out of the relegation play off.