Belmont storm back in second half to overcome Coolderry 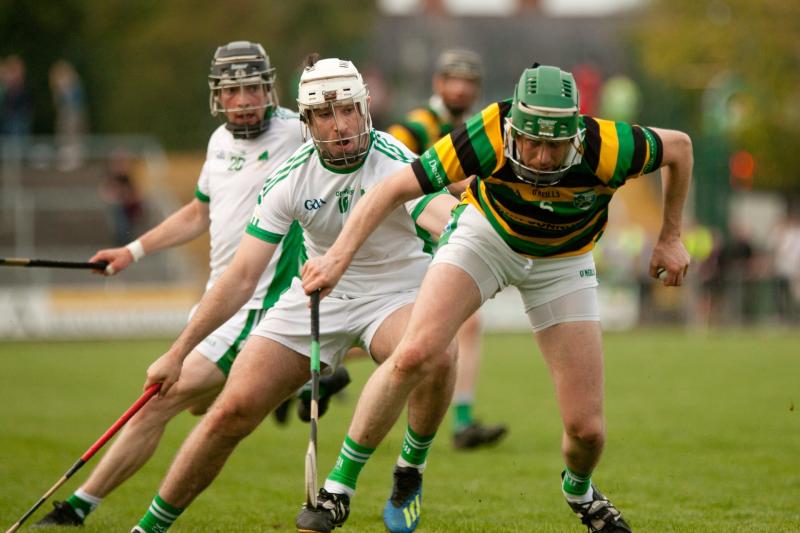 BELMONT scored the last eight points of the game to overturn a four point deficit and defeat Coolderry by a four point margin in an exciting Offaly senior hurling championship game played at St Brendan's Park, Birr on Saturday.

Coolderry led for much of the game and had enjoyed the better of the first half but Belmont became more dominant the longer the game went on and they thoroughly deseved to pick up their second win of the campaign, leaving them very strongly placed now, even at this early stage, to claim a place in the knock out stages of the championship.

It was a very good contest and had the attendance on the edge of their seats until the final whistle with the result still very much in doubt. Coolderry pressed for the goal that would have pulled the game out of the fire for them but Belmont stood firm at the back and broke away in the closing minutes to pick off the points that sealed the victory for them.

Coolderry came out of the blocks quickly and were sharper in the early exchanges as they built a small lead which they were able to maintain all the way to half time. Belmont cut the gap to one at times, but Coolderry always seemed to be able to move ahead again when their lead came under threat.

Belmont were playing catch up but they were also playing quite deep and oftentimes the ball was played into a forward line were there was no more than one forward outnumbered by a couple of backs. They were also relying on David Nally's accuracy from frees as he accounted for six of their eight points in the first half from placed balls.

The first ten minutes of the second half followed a similar pattern with Belmont reducing the gap before Coolderry nudged in front again. They were four points up with 20 minutes left but Coolderry failed to score again for the remainder of the game as Belmont showed great hunger and desire to fight for every ball and they gradually clawed their way back into the game. They levelled with eight minutes left and finally went in front three minutes later and despite coming under late pressure held on to win.

It was an improved performance by Belmont from their opening round encounter with Seir Kieran and they finished much stronger on this occasion as they came from behind. They were tigerish in their tackling and never let Coolderry settle on the ball. With games to come against Ballinamere and Shinrone, they are in a strong position now in the group.

This was Coolderry's first game as they had a bye in the first round and defeat now puts them under a little pressure. They have to face Ballinamere next and with a win and a draw behind them Ballinamere will go into that game with confidence and Coolderry will have work to do. They played well in the first half of this game but faded out of the game after the break and in the latter stages resorted to shooting under pressure and hit four wides in a row in the last seven minutes. They failed to score from play in the second half with all three of their points coming from frees and their last score from play was their goal after 26 minutes.

Cian Burke put Coolderry in front in the second minute but David Nally replied from a long range free from inside his own 65m line. Brian Carroll (free) and Cian Burke restored Coolderry's lead but Belmont missed a great goal chance when loose play around the Coolderry goal led to the ball running loose but Paddy Clancy steered the ball wide from close range.

Kevin Connolly added a fine point from close to the right sideline before David Nally (2) and Brian Carroll exchanged frees. Kevin Brady pointed two in a row for Coolderry, sandwiching a Paddy Clancy point for Belmont. Three David Nally frees with one in reply from Brian Carroll left a point in it after 23 minutes.

Coolderry struck for a goal three minutes later when a long Stephen Corcoran free dropped dangerously under the crossbar, Barry Egan could only half bat it out and Shane Ryan slapped the loose ball to the net. Paddy Clancy replied with a fine point for Belmont before Brian Carroll slotted another free to leave four in it at half time, 1-9 to 0-8.

David Nally pointed five frees in succession from a variety of distances to edge them ahead for the first time with five minutes left and they finished with a flourish with two Damien Egan points and another David Nally free. He also had a chance of a goal but put his effort into the sidenetting. But his side had done enough and claimed their second victory of the campaign.

Once again David Nally was key for Belmont and his 13 points, 12 from placed balls, kept the scoreboard ticking over. Some of those frees were from well inside his own half and it was a great display of freetaking. He also had a chance of a late goal to seal the game but just sent his shot the wrong side of the post. He has now scored 1-24 of the 1-32 Belmont have scored in the championship.

Belmont closed out the game well with three points in injury time. Damien Egan scored two of those from play and he showed composure and experience in both cases as he made room for himself before gathering possession and then being content to take his points when goal chances might have been possible but he wisely opted for the insurance of taking his points.

Brian Gavin handled the game very well. He let the game flow as much as he could and applied the advantage rule well, calling back incidents for both sides to award frees. He was quick to clamp down on any wrong doing and kept control of the game throughout.

Coolderry came within a whisker of winning the county title last year this defeat will put them under a bit of pressure to make the knock out stages. They looked sharp early in the game but they failed to score from play in the second half, adding only three frees, and they failed to score at all in the last 20 minutes. Their next game against Ballinamere could define their season as another defeat would leave their chances of making the knock out stages clinging by a thread.

Coolderry face Ballinamere in their next match in two weeks while Belmont have a bye in round three as they now sit on top of the table with four points.

This was the second part of a double header at St Brendan's Park and on a lovely evening, everything was in order for both games. The pitch looked well and there were plenty of stewards on duty to deal with everyone.