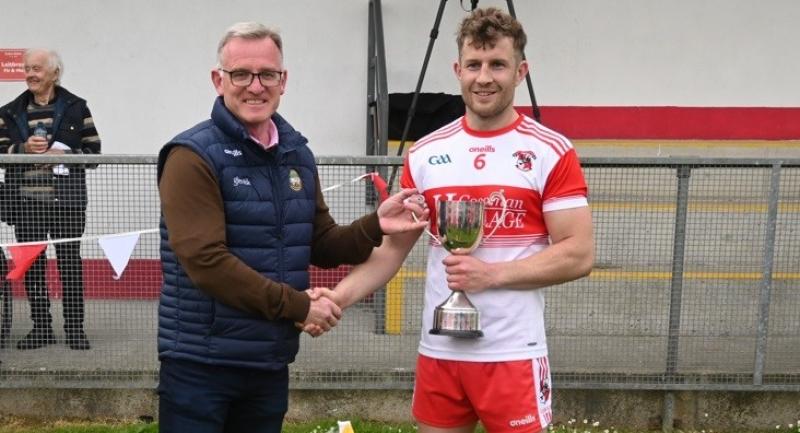 FURTHER evidence of the changing climate in Clonbullogue parish was provided on Saturday evening in Edenderry when Clonbullogue captured the Division 2 Football League title at the expense of their parish neighbours Bracknagh.

The long time paupers in the parish, the tide has turned quite spectacularly for Clonbullogue in recent years and they are now in the ascendancy- though Bracknagh will certainly be disputing that assertion as both clubs are in the Senior “B” Football Championship along with Walsh Island and time will adjudicate on who are kingpins.

However, the momentum is very much with Clonbullogue at the moment and this win showed their good health. They have moved up a grade after a sensational 2021 in which they won the Offaly intermediate and Leinster junior football titles and getting to senior football is their medium term aim.

They will be hoping to achieve it this year and will be contenders but there are a lot of good, tough teams in senior “B” and they have plenty of developing to do. For decades Clonbullogue played third fiddle in their parish. Walsh Island are the aristrocrats, one of Offaly's iconic football clubs and the winners of a multitude of senior championships, including a famous six in a row from 1978 to 1983. Bracknagh have had occasional spells in the sun and have generally punched at a higher grade but Clonbullogue now have a rich vein of young talent.

One of their players, Keith O'Neill was a key member of the Offaly All-Ireland U-20 football panel last year and was on the Offaly senior squad this year. They have plenty of other exciting talent and have won admiration for their attacking play.

It was no surprise that this was a high scoring, entertaining shootout and Bracknagh certainly were not shying away from their opponents. Peter Cunningham, home from an Army tour in Syria, is their best known player and he was on fire as he scored 2-5, 2-3 from play.

Clonbullogue, however, were the better side on the evening, they always looked like they would get the job done and they had a match winner in Joe Foran who scored a great hat trick of goals. They were the better team in the first half, leading by 0-5 to 0-3 after 20 minutes and then going in at the break with a 1-9 to 0-5 advantage thanks to Ryan Dempsey 20th minute goal.

Bracknagh fought very hard in the second half. Mikey Cunningham got a goal in the 38th minute but the gap was still a formidable five, 1-11 to 1-6 after 38 minutes. The losers were right back in it as the final whistle approached, losing by just three, 1-11 to 1-8 with 12 minutes left.

They were fighting for everything and a glut of goals arrived in a thrilling and dramatic finale. The game really sprung to life with two goals in the 55th minute. Joe Foran got in for Clonbullogue and Peter Cunningham replied immediately for Bracknagh thirty seconds later. Joe Foran got his second in the 59th minute and clinched it with his third goal a minute later – Peter Cunningham got a consolation for Bracknagh three minutes into injury time but it was too late to affect the outcome.