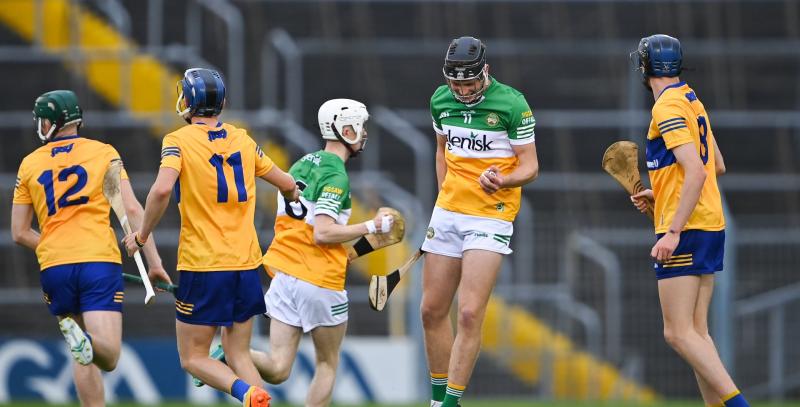 THE thousands of Offaly supporters who made the pilgrimage to Thurles on Friday evening made the journey home in jubilant mood after watching their young heroes qualify for the All-Ireland Minor Hurling Championship final with a seriously gutsy display against Clare.

On a day in which some things went wrong, Offaly showed character beyond their young years to set up an All-Ireland final date with Tipperary or Galway. They made a tension filled start, going behind by four points to no score after ten minutes but Offaly were the better team after this. They had recovered to lead by 1-6 to 0-7 at half time with a wonderful 16th minute Adam Screeney goal giving them the initiative.

Clare got it back to a point at the start of the second half but a tremendous Conor Doyle goal changed the game once again. It was followed by two points as Offaly led by 2-8 to 0-8 and ultimately that gave them the cushion to get home.

Clare did get the next four points but two was the closest they could get and by the three quarter way stage, the gap was six once again. The Munster men fought with everything they had and got the deficit back to three on two more occasions but they couldn't get closer and never looked like manufacturing the goal they desperately needed.

That was a tribute to a quite remarkable defensive performance by Offaly. They defended with tremendous tenacity and showed great composure under considerable pressure. Corner back Ruari Kelly had a tremendous game, full back James Mahon came to his milk in the second half and Brecon Kavanagh worked his socks off, never letting his head drop, even when he made mistakes. Donal Shirley's forays up field were a great asset to Offaly and this win was founded on their defensive excellence.

Cillian Martin and Niall Furlong put in serious shifts at midfield. A lot of their work was unseen but they covered the hard yards and put in the hefty hits that made Clare wary of delaying in that area. Elsewhere, Dan Ravenhill was a real match winner. He got six points, three from play and his strikes from play were as good as you would see at any level. Shane Rigney did a lot of good things while Daniel Hand made a powerful impact when introduced. Hand had missed the Leinster semi-final and final because of grandular fever but he won crucial ball, got a lovely point and strengthened the Offaly team when introduced.

It wasn't the perfect performance. Offaly made their share of errors and their handling and touch was not as good as they would have wished all the time but their work ethic never dropped and was the reason they triumphed.

It was a special, emotional occasion for Offaly with thousands making the trip from all over the county including busloads of children. They vastly outnumbered the Clare support and were a definite help to the team in the second half. It is Offaly's first All-Ireland minor final since 1989 and this young team have brought great pride to the county.

The first half was an absolutely compelling, engrossing affair. It was full of twists and turns with Offaly very nervous early on as they made some elementary mistakes. Adam Screeney missed a couple of very scoreable frees and that was typical of Offaly's overall play at this stage.

It was certainly looking blue for them as Clare found their feet quicker and shot four points without reply in the opening ten minutes. It was 13 minutes before Screeney finally settled Offaly with what seemed a soft free but it gave them the confidence they needed.

Suddenly, they began to find their range all over the field, the errors were reduced dramatically and points from Donal Shirley and Dan Ravenhill (free) were followed by a wonderful 16th minute goal from Screeney. Cillian Martin had point on his mind when he got the ball about sixty metres out but didn't get a clean strike. The ball fell to Screeney and he showed breaktaking skill and awareness to escape his marker and lob the goalkeeper Mark Sheedy – it was a stunning score on a day when he was tightly marked but showed glimpses of his breathtaking ability.

That gave Offaly the lead for the first time, 1-3 to 0-4 and it was now clear that they were a match for Clare. Frees from Dan Ravenhill and Adam Screeney gave them a 1-5 to 0-5 lead after 26 minutes and Dan Ravenhill's superb point from out on the right wing ensure a 1-6 to 0-7 half time lead.

There was no let up in a magnificently entertaining second half. Jack O'Neill drew first blood for Clare but a great Conor Doyle goal seconds later after he raced through, followed by two Screeney free gave Offaly a 2-8 to 0-8 lead. They were in an excellent position but then errors crept back into the game. It allowed Clare back into it as they got four on the trot to trail by 2-8 to 0-12 after 39 minutes.

Offaly were crying out for inspiration and Dan Ravenhill provided it. Impressive sub Daniel Hand got a lovely point and Ravenhill got two spectacular long range ones. Cillian Martin and Shane Rigney also got points as Offaly led by 2-13 to 0-14 at the three quarter way stage.

Clare, however, wouldn't go away and with ten minutes left it was a three point game again, 2-13 to 0-16. With the winning post in sight, Offaly stood up to be counted all over the field. The hurling was very human as some ball was spilt and mistakes were made but pure desire got Offaly across the line. Leigh Kavanagh and Oisin Whelan (free) exchanged points before Ravenhill pushed the winners four lear with a 55th minute free.

Screeney had a bad wide from a free and Whelan's tap over free made it a three point game again with the 60 minutes up. Four minutes of injury time were played and it is to Offaly's credit that they never looked like losing the game here. They won crucial ball, displayed maturity defying their years and Screeney found the range with a 62nd minute free from an acute angle after he was fouled. That was the final score and a four point lead was always going to be enough at this stage of the game.

Dan Ravenhill (Offaly): There is a very strong case to be made for corner back Ruari Kelly, whose covering, tackling and composure was great but Dan Ravenhill's contribution can't be overlooked. He got three points from play of the highest calibre, carried a mountain of ball, showed great physicality and was a huge factor in Offaly reaching the final.