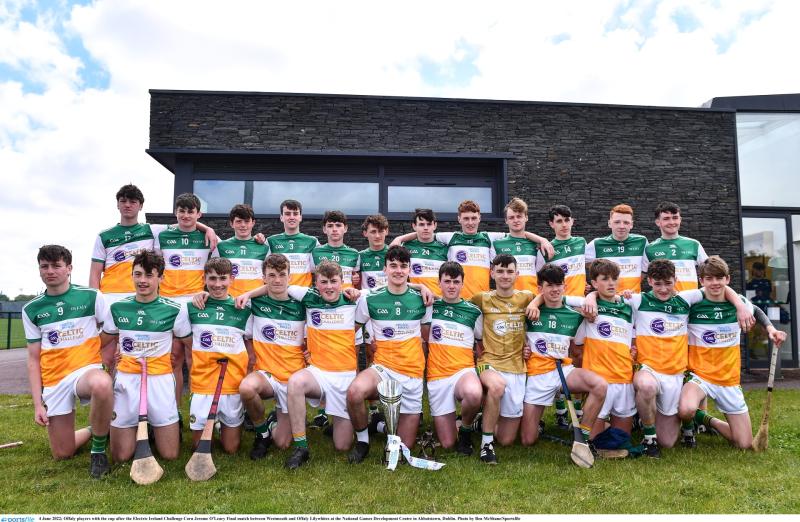 THE GAA’s Celtic Challenge competition is a unique event in the association, in that it does a remarkably good job at serving different needs for different counties.

For large swathes of the county, particularly those counties north of the N4, it has become the de facto minor championship. For some, like the Division One finalists from Galway and Tipperary, it is used to keep a shadow minor panel going, where standards are still kept incredibly high.

Others, such as Cork, Limerick and even Kildare in 2022, enter multiple teams to expose a greater number of hurlers to the challenges and the honour of playing underage for your county. Then there are counties like Offaly and Westmeath, who use the championship as a testing ground for the best of the county’s U-16s, all with a view towards preparing for the following year’s minor championship.

Back in April, the signs for Offaly’s 2023 minor championship run were not good. Even allowing for those players that were committed to this year’s minors, the U-16s struggled to find their feet in this Celtic Challenge event and lost games comprehensively to teams that on paper, should struggle against Offaly sides.

Those defeats meant that Offaly dropped into the Corn Jerome O’Leary playoffs, which is effectively the fourth tier of Celtic Challenge competition. However a strong semi-final showing against Antrim hinted at better things to come, and on Saturday afternoon, Enda Mulhare’s side produced their best display of the year, putting Westmeath to the sword with a performance that was every bit as dominant as the final score suggested.

It took time for that dominance to show on the scoreboard, as a number of early wides and shots dropped short meant that the lead was small, 0-3 to 0-1, with 15 minutes gone.

However even at that early stage, Offaly’s control of the game at midfield and half-back in particular was evident. Niall Kelly was a colossus, Gearóid Maher and Mark Mulrooney hurled a world of ball, and while Paul Cannon’s use of the ball was mixed, his workrate and his tackle count was such that his overall effect on the game was a positive one from Offaly’s point of view.

A swirling breeze made things tricky up front, but when Offaly found their rhythm, they quickly added 1-3 in the space of three minutes. Dylan Gath-Hollywood and Mulrooney added excellent points, Niall Flannery pounced on a sloppy clearance to whip the sliotar right back over the bar from 40 metres out, then the subsequent puckout was gathered by Darragh Scully and sent into James Morkan, who duly found the net.

Westmeath were working hard to try and bring their forwards into play but the quality of ball going up to that end of the field was very poor, in no small part because of Offaly’s pressurising and tackling in the middle third. Caolan Reidy proved his worth with two excellent scores under pressure, both from hard-won possession, and as Offaly again hit a barren spell in front of the posts, there was a narrow window of opportunity there for the underdogs.

Then, in a fifteen minute spell either side of half-time, that window was shut. A good point from Morkan broke Offaly’s ten minute scoring drought and by half-time, further scores had been added by Maher, Flannery and Morkan again.

Morkan and Scully were on the mark immediately after half-time, Gearóid Maher shot a memorable point from distance without putting his hand on the ball, and while Westmeath finally registered a score through a Neale Pierson free, Mark Mulrooney replied by setting up Niall Flannery for a goal, and Offaly were effectively home and hosed with over 20 minutes still to play.

Even as the bench emptied, the overall trend and tone of the game continued unchanged. Westmeath were under immense pressure at all times, Offaly largely did the right things with the ball, with the exception of a couple of shots from outside their range, and the scores kept coming.

Patrick Lyons added 1-1 off the bench, Aaron Molloy crowned an industrious display with a well-worked point, and right up until the end, Mark Mulrooney was able to open up the Westmeath defence at will, as evidence by a wonderful score on the run in the closing minutes.

Six years ago, Offaly were the first ever winners of the Celtic Challenge Division One title. On that occasion, John Murphy’s 2-2 was central to Eunan Martin’s side edging out South Kilkenny by a point. This win doesn’t quite catch the eye to the same extent, but from a very poor start, it represents real progression and development, and the prognosis for 2023 looks very different to how it did a month ago.

Officially known as the “best and fairest” award, the Kilcormac-Killoughey player was hugely involved in general, shot three good points, and looks for all the world like a player who could yet have something to add to Leo O’Connor’s minor panel in a couple of weeks. Wing back Gearóid Maher is another player who was part of the extended minor panel and who showed up well here, while centre back Niall Kelly was also immensely impressive in a key role.

Offaly had gone through a ten-minute scoreless spell coming up to half-time and while they were still very much in control of the game, a couple of Westmeath scores before the interval might have planted further seeds of doubt, given that the Lake county had registered the previous two scores.

A superb strike from James Morkan on the left wing split the posts and Offaly quickly found their form, tacking on three more before half-time.

SCORE OF THE MATCH

There isn’t a coach in Ireland who would teach anybody to do what Gearóid Maher did when he ran onto a breaking ball on the left wing early in the second half, just inside the Westmeath 65m line. The Shinrone player lifted the ball under pressure and cut across it with a first time strike instead of taking the sliothar into his hands, swerving a high shot from left to right that eventually sailed over the black spot. It was an incredibly low percentage play, but a joy to watch nonetheless.

This was an easy assignment for Kevin Brady as there was no real edge to the contest. An early overcarrying call on James Morkan when the goal was at his mercy seemed harsh, but otherwise the Louth official showed why he is so highly rated by letting the players do their thing, while offering clear guidance for each of his calls.

By definition, this is a development competition, where Offaly exclusively fielded players that are still eligible for minor games in 2023. There were issues with players who had a very obvious weak side, there were some poor decisions on the ball, and in contrast to the players of Galway and Tipperary, who hurled in the Corn Michael Hogan (Division One) final, there was a stark difference in terms of size and power. However there was nothing that can’t be at least partially addressed over the coming six to eight months.

This was a competition where Offaly started dreadfully, with poor defeats to Meath and Wicklow. However over time they pulled together some decent performances, and their last two games against Antrim and Westmeath were very impressive. Unlike some other counties, the decision has been taken in Offaly to limit contact time with these players, in order to allow club games to continue – a choice that isn’t an issue in larger counties, where there are more clubs and games can continue without county players.

However by any stretch of the imagination, this is a group that has improved immeasurably as the summer has progressed, which is a testament to the management team of Enda Mulhare, Martin Ryan, Patrick Donegan and John Murray.

There can’t be too many playing surfaces in Ireland that can compare to what’s on offer at all five grass pitches at the National Centre of Excellence in Abbottstown. The grass is dense and short, the sod is immaculately flat and true, and there is simply no excuse for anything less than good summer hurling.

Like all such centres, it’s not built for a good spectator experience in adverse weather, but thankfully that wasn’t an issue.