Offaly hurling heroes out for launch of new book 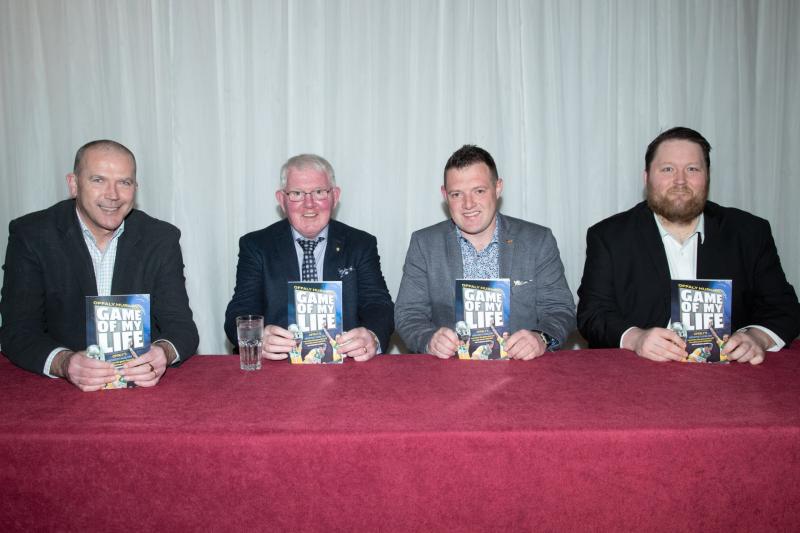 Liam Hayes, Padraig Horan, Brian Lowry and Will O'Callaghan at launch of Game of My Life.

SOME of Offaly's most famous hurlers were out in force last Friday for the launch of a new book celebrating some of their exploits.

The book was officially launched on Friday evening by Padraig Horan, captain of the Offaly side that won the All-Ireland Senior Hurling Championship in 1981. The Banagher man is among the twenty five stars featured in the book. Each interviewee was asked to recall one game that stood out for them during their career.

Interestingly, Horan choose the 1985 All-Ireland final win over Galway ahead of the big breakthrough Leinster and All-Ireland wins in 1980 and 1981. He explained that the 1981 final bypassed him and he didn't have a good game. He opted for the 1985 final as Offaly had a big point to prove after losing to Cork in the centenary All-Ireland final in 1984.

The book is the latest offering from Herobooks in their 'Game Of My Life' series with other counties such as Cork, Galway, Tipperary, Waterford, Sligo, Clare, Dublin and Meath having already had some of their greatest players chronicled over the past year.
A similar book on Offaly football will also be produced by Herobooks in the coming year or so.

Memories from the Offaly hurling legends range from the 1960s right up to more recent years with players choosing a wide range of games featuring club and county memories. Historic All Ireland and Leinster titles, breakthrough games, agonising near misses and memorable club wins for Birr, Kinnitty, Tullamore and Coolderry are all delved into.

The book, published by former Meath GAA footballer Liam Hayes and Herobooks, has been on sale in local and national book shops from April 29 and will be available to purchase online also through Amazon in the form of an EBook (€10), paperback (€20) and hardback (€25).

MC at the launch was radio presenter Will O'Callaghan while Liam Hayes outlined the work Herobooks do, revealing that they have published a spate of books across Ireland and the UK. Hayes stated that these books may have been published in different areas and about different sports but they all had one common them – the central and unifying role sport plays in their communities.

Brian Lowry thanked everyone who helped him with the book and co-operated. He stated that the book had taken longer than intended because of Covid-19 lockdowns but he was proud of the finished product.