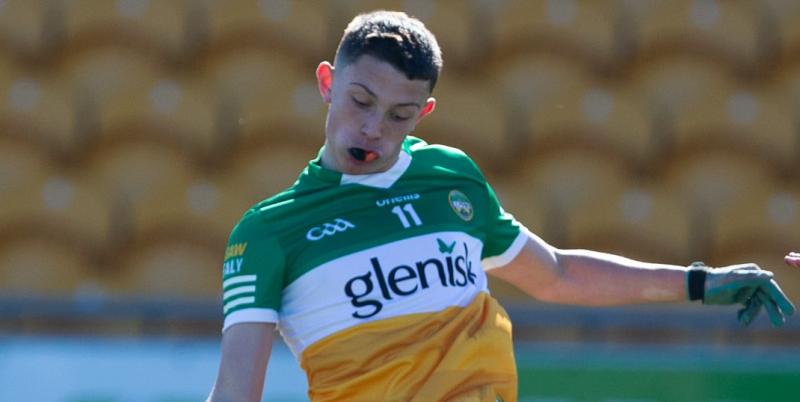 Conor Fox had a good evening for Offaly, scoring 2-2

PLAYING with much greater pace and intensity, Offaly booked their place in the quarter-finals of the Leinster Minor Football Championship with a convincing and impressive win over Carlow in Dr Cullen Park on Wednesday evening.

Having blown way more cold than hot in the championship so far, Offaly showed that games will bring them on and produced their best football of the year to brush Carlow aside.

The win does come with a large health warning. Carlow were very poor and their defence in particular were exposed time and time again but Offaly will now prepare for a quarter-final with their confidence well boosted and the scope to improve further.

That game against Laois in O'Connor Park next Wednesday evening will tell a lot more about the true quality of this team but they certainly looked good here. Again, it is hard to escape the inadequacies of the opposition while Offaly looked mediocre in some of their earlier games but they were flying at times and their first half display was particularly memorable as they ripped Carlow to shreds.

Their 4-8 to 1-3 half time lead was an accurate reflecion of how much better Offaly were and they could have been further out of sight. They scored four goals but Luke Kelly could have got two more, dropping the ball with one chance and blasting another over the bar. Offaly were also unhappy at thegoal they conceded as the defence lost the runner through and Shane Duffy was left all on his own in front of goals to fnd the net in the 13th minute.

That left Carlow trailing by 2-4 to 1-1 after Conor Fox and Shane Rigney blasted home great goals in the 1st and sixth minutes. While Liam Gavin should have got a goal or a penalty for Carlow in the 18th minute, pointing ater being pulled back, Offaly soon took control again

Donal Shirley got a very good goal in the 18th minute and Conor Fox converted a 29th minute penalty after Shane Rigney was fouled. With Offaly also floating over some lovely points, they were in complete and utter control and the only issue at the break was their winning margin.

Offaly were never in the slightest of danger in the second half. The deficit was irretrievable for Carlow but Offaly really killed them off with four quick points at the restart before the home side got their first point in the 34th minute. Niall Furlong should have got a goal with Offaly's 13th point while Carlow missed a sitter a few minutes later.

Offaly eased off a small bit and kicked a few wides but the introduction of hungry subs reinvigorated them as the second half progressed. It was 4-16 to1-6 with five minutes left. Cillian Moore got a Carlow goal in the 56th minute and sub Cian Gorman-Comerford had a penalty well saved by Sean Kavanagh as Offaly fell asleep.

Luke Kelly got a deserved goal for Offaly three minutes from time and they could have got another one as sub Robert Carney had a shot saved but it was all immaterial at that stage.

It was a really accomplished display by Offaly, though things came way too easy for them as Carlow's resistance was poor from the start, waning as it went on. Carlow were also desperate in the U-20 Football Championship against Offaly and while they are a small county, you would really wonder at what is going on there.

Offaly, however, can only play what they are up against and they moved well, worked hard and took excellent scores. It was a good collective performance with sevveral fine individual performances. It was not perfect and there was one big cause of concern. The defence looked vulnerable and were opened up by Carlow a few times. There were a couple of occasions when Carlow broke through for goal or had goal chances too easily and against better opposition, Offaly will be exposed – their defence has to tighten up considerably if Offaly are to progress further.

Shane Rigney, Cillian Bourke and Padraig McLoughlin were Offaly's three outstanding performers while there were also fine displays from Daragh McKeon in the first half, Darcy Thomas, Donal Shirley and Niall Furlong on an evening where every Offaly player did well for at least some of the game.

Cillian Bourke (Offaly): Cillian Bourke was brilliant for Offaly. His first half tour-de-force was out of the top of the drawer and he continued to excel in the second half before being given a rest, or Carlow given a break, when he was replaced in the 47th minute. His work rate, his fielding, his passing and his athleticism all captured attention and he is still underage next year.