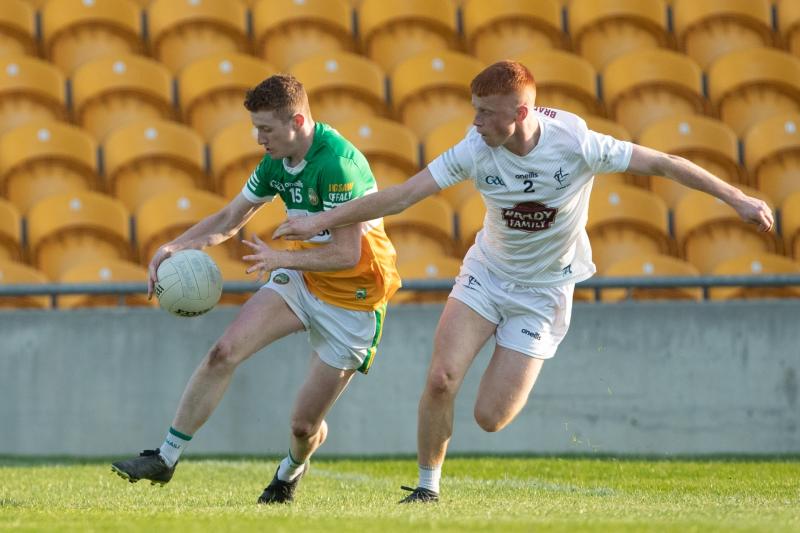 OFFALY paid the ultimate price for losing their shape and abandoning the game that has served them so well over th past two years when Kildare ended their reign as Leinster and All-Ireland U-20 football champions in an engrossing semi-final tie in Tullamore on Thursday evening.

A return to the Leinster final was well within Offaly's grasp for much of the second half but with the winning post in sight, they became ultra defensive, they lost their shape completely and they suffered greatly for this.

Offaly were in a strong position when they went in on level terms at half time, 0-8 to 1-5, having played against a stiff enough wind. They then grabbed control of the game early in the second half as points from Keith O'Neill, Cormac Delaney (free) and Morgan Tynan pushed them three clear, 0-11 to 1-5 after 36 minutes

Offaly were in control but inexplicably, they lost their way for the next fifteen minutes. Players drifted back into defence and for long periods Keith O'Neill was up front on his own – at one stage, every Offaly player was back in their own half as they went way too defensive way too soon. They invited Kildare onto them and the visitors did not turn down the gift.

Aaron Browne came off the bench to score a decisive 1-2 and by the time, Offaly got their shape back, they were chasing the game. It was unfortunate that Offaly contributed to their own downfall in such a manner as their attacking football had won them admirers throughout the country over the past year plus. Apart from players going back, they also became cautious on the ball, looking for the safe option, and not breaking tackles or attacking with their usual pace.

Credit also has to be given to Kildare who threw the kitchen sink at Offaly when the game was slipping away from them. Offaly's football helped them but Kildare also played very well, piling on relentless pressure.

Points from Eoin Bagnall (free) and Browne made it a one point game with 44 minutes gone. A Cormac Delaney free restored a two point lead and as the game entered the last ten minutes, it looked like Offaly might be able to weather the storm. Instead, Kildare got the decisive scores, though the all important second goal was partly self inflicted. The finish by Aaron Browne in the 50th minute was top class but Sean O'Toole's kickout on top of Jay Sheerin was poor and Kildare broke through at pace once they won it.

An excellent free from goalkeeper Cormac Barker put Kildare two ahead a minute later and suddenly Offaly were chasing the game. They fought with everything they had. Morgan Tynan did stand up and got a fine point to bring it back to a point. Browne got his second point, Cormac Delaney cut it to the minimum with a free and then Kildare got two on the trot from Adam Fanning and sub James Dalton to lead by three as it went into injury time.

Offaly needed a goal but their best chance of getting one, Keith O'Neill pulled something in his leg and was struggling, though he showed how much he wanted it by staying on. Jay Sheerin had a very poor wide with a shot that wasn't on and a Cormac Delaney free four minutes into time added on was the final score.

The first half was a tense but tantalising and very open affair. Both sides worked very hard and there very little separating them the whole way.

The sides were level three times in the opening eight minutes and the shooting was flawless until Keith O'Neill kicked the first wide in the 11th minute with the type of chance he would normally convert.

Kildare had first use of a significant enough wind and they took the lead with a Adam Fanning point. They made an important breakthrough in the 13th minute with a punched goal from Daniel Lynam after a Dean O'Donoghue cross ball – full back O'Donoghue had followed Corrmac Delaney, once again playing a sweeping role, down the field while Lee Pearson did not defend as well as usual.

Kildare were 1-4 to 0-3 ahead but Offaly were the better team from here to the interval. They upped their work rate and began to turn ball over. They got five points on the trot to edge ahead with Delaney scoring two excellent long range play offs, one a free and the second a “45” that could have been a penalty as Mark Maguire appeared to handle on the ground.

Offaly could have been further ahead as Harry Plunkett, who was excellent for much of the first half, curled two shots wide. A super Eoin Bagnall point sent the sides in on level terms at half time, 0-8 to 1-5. Offaly were happy to be in that position with the wind to come, though it remained neatly balanced and very much up for grabs.

Offaly have no complaints at the result. They played well in the first half and early in the second half but never really looked like getting in for a goal against a good Kildare defence. They weren't quite good enough on the day, though it would have took very little to have won it – they probably should have been able to win it once they went three points up in the second half and the way they went defensive was lunacy really and very much against the nature of a team who love to attack.

It looked like this just happened on the field, not by instruction, and they did get their shape back inside the closing quarter but by this stage, their momentum was gone. It was a strange sort of performance by Offaly and even some of their best players were also guilty of some mediocre play at times. Offaly's best player was Keith O'Neill, who caused consternation in the Kildare defence every time he got the ball. Cathal Ryan, John Furlong, Morgan Tynan, Harry Plunkett and Darragh Flynn, in the first half, half had good spells for Offaly. The decision to take off Plunkett 17 minutes into the second half seemed strange – he had been at the centre of a lot of Offaly's best play in the first half, quietly dictating the game and had just converted a crucial free when called ashore but he had been taking a bit out of the ball and slowing things down in the second half, which could be the reason he was pulled ashore.

No one, however, will be or should be criticising a squad of players and management who have brought so much pride to the county. They won an All-Ireland no one thought possible, they excited and thrilled with the quality of their football, they went down with their boots on here and even in defeat, they can hold their heads up very high.

Aaron Browne (Kildare): Aaron Browne was the main reason Kildare won this game. He had missed earlier action with a hamstring injury but oozed class and quality when introduced eight minutes into the second half. 1-2 was an absolutely surpreme contribution off the bench and his scores were the mark of a very confident, talented player.