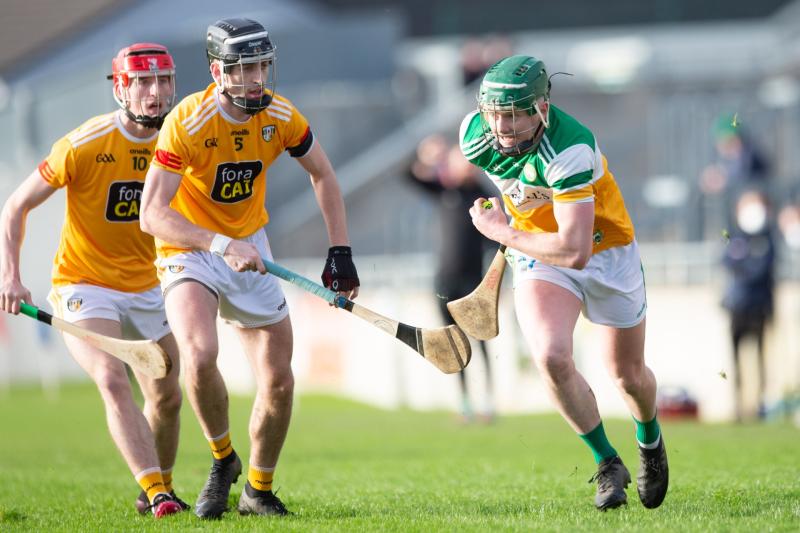 Paddy Clancy in action for Offaly against Antrim.

OFFALY senior hurlers will learn a lot more about themselves when they face Dublin in their third Walsh Cup game in Birr on Sunday next.

Offaly have shown a great appetite for action in their two games so far, a defeat by Galway and win over Antrim but Dublin will really test them on Sunday.

Dublin have been very impressive so far, beating Antrim by 2-27 to 1-21 in their first game and doing a job on Galway last Sunday, 3-29 to 0-19. While Galway are experimenting and team building under new manager Henry Shefflin, the magnitude of that defeat was a big surprise to them.

Offaly have been solid so far. They competed well when losing by 2-19 to 0-19 to Galway in Ballinasloe and took their goal chances to beat Antrim by 3-18 to 0-21 in Tullamore last Sunday.

Offaly are preparing for a very tough National Hurling League Division 1 programme and they open against Galway in Salthill on February 6. It will represent a big step up from Division 2 hurling and Offaly will be aiming to compete as well as they possibly can.

The Walsh Cup is very much a competition for experimenting and the league is the early season priority for counties. However, it serves a very useful purpose. Dublin will be very encouraged by their form in it and are clearly in good fettle while Offaly's target is to be competitive and see how players compete against the better hurlers.

Dublin's scoring difference is likely to get them through to the final as group winners but they will be keen to continue their winning run. They are favourites to do so, though they may take the opportunity to try players. For Offaly, the performance is the big thing and Michael Fennelly will be looking for high intensity and all out commitment from his players.