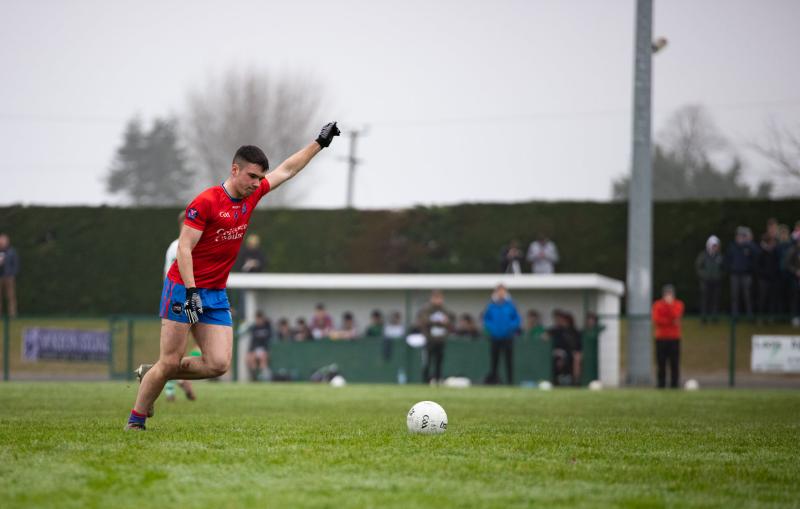 COLAISTE Choilm Tullamore sealed a place in the semi-finals of the Leinster Colleges Senior Football 'A' championship with a dramatic come from behind extra time win over Wexford Schools in a terrific contest at Stradbally on Sunday.

This was Colaiste Choilm's second visit to Stradbally in this year's championship and it was a case of deja vu as for the second time they had to go to extra time and they eventually won both games by a single point – and both against Wexford opposition.

On Sunday they really had to dig deep to stay in the contest but they never gave up and deep into injury time they got two points to take the game to extra time when it looked like they might be dead and buried. They were the better team in extra time but failure to take their chances meant they were living on a knife edge until the referee blew the final whistle after four minutes of injury time.

It was a great contest throughout and both sides were fully committed and gave their all. Many players on both sides were almost out on their legs at the end and it was no surprise to see a number of players suffering from cramp.

There was little to separate the teams for much of the game and they were level three times in the first quarter before Colaiste Choilm hit a fortuitous goal to give them an advantage and two injury time points helped them to a 1-6 to 0-4 half time lead.

The Tullamore side held their advantage early in the second half while playing against the wind until a black card for Joel Troy in the 38th minute when Wexford Schools utilised their man advantage to score 1-3 without reply to lead 1-8 to 1-6 at the second water break. Colaiste Choilm regrouped in the final ten minutes and scored those late points to send the game to extra time.

Colaiste Choilm had more of the play against the wind in the first half of extra time but hit five wides and were still level at the break. However two points early in the second half gave them the advantage and while Wexford never gave up they came up just short in the end.

Colaiste Choilm can now look forward to a semi-final but know they got out of jail at the end of normal time when it looked like the match might be gone. They had to rely on the accuracy of Harry Plunkett to keep them in touch and he scored nine of their points, all from placed balls. That lack of scores from play might be a worry for them and also the fact that they hit 13 wides over the 80 minutes. Those misses may have come back to haunt them but it is something they can improve for future games.

Defensively they were excellent and they worked very effectively as a team to keep Wexford out. They also had goalkeeper Pat Grennan to thank for keeping them in the game as he pulled off a number of terrific saves, none more important than the one from Jack Higgins just before the end of normal time which kept the gap to just a single point.

Wexford were at their most effective when they broke quickly from defence. They had speedy forwards who were direct in their running and they caused Tullamore problems when they did that. They had eight different scorers from play with Rian Fitzpatrick the only one to score more than once. They were less effective when Colaiste Choilm had defenders back and lacked a bit of creativity at that stage.

Along with goalkeeper Pat Grennan, Jack Daly, Cathal Ryan and Daire McDaid impressed in defence, Harry Plunkett had a fine game at midfield while in attack Robbie Gallagher, Niall Furlong and Joel Troy made important contributions.

Colaiste Choilm had the wind behind them in the first half and two Harry Plunkett frees were answered by Ben Martin and Cathal Murphy before Brian Cushe put Wexford in front. Harry Plunkett then levelled again from another free.

After 16 minutes Colaiste Choilm struck for their goal. Wexford goalkeeper Liam Donohoe had advanced to around midfield before offloading to a colleague but his pass was intercepted by Cillian Martin, who transferred to Jack Connolly. He picked out Robbie Gallagher and with no Wexford defender dropping back to guard to net, with the goalkeeper still caught out the field, he floated the ball in for a goal.

At the other end Pat Grennan made a great close range save from Cathal Murphy while Colaiste Choilm went close to a second goal but Ben Heffernan's shot came off the post. Gavin McNulty reduced the gap to two but Colaiste Choilm finished the half well with Hary Plunkett (free), Niall Furlong and Robbie Gallagher (mark) all pointing to leave them 1-6 to 0-4 ahead at half time.

It took Wexford five minutes to get off the mark in the second half when Rian Fitzpatrick pointed a free. Colaiste Choilm were then reduced to 14 men for 10 minutes when Joel Troy was black carded for a trip and Wexford took advantage. Cian Hughes and two Rian Fitzpatrick points reduced the gap to one after 15 minutes and from the kick out, Cian Hughes and Cathal Murphy combined to set up Liam Doyle and he shot low to the net to put Wexford 1-8 to 1-6 at the water break.

Slowly Colaiste Choilm began to get back into the game and six minutes from time Harry Plunkett pointed a free Then with two minutes left Wexford looked set to seal it when a good move set up Jack Higgins but Pat Grennan advanced to make a brilliant save to keep his side alive. Rian Fitzpatrick did point a free to put them two up going into injury time. Colaiste Choilm kept going and Harry Plunkett pointed two frees, the second five minutes into injury time, to level matters.

Into extra time Colaiste Choilm enjoyed more of the possession but neither side scored. Daire McDaid did have a shot saved by Liam Donohoe while at the opposite end Liam Doyle hit the post from close range.

Harry Plunkett pointed two frees in the first four minutes of the second half but Dylan Cooke brought it back to one. Jack Connolly scored a lovely point from an angle to push it out to two again and although Wexford pushed, a free from Rian Fitzpatrick was their only reward and Colaiste Choilm held on to win by a point.

Harry Plunkett will take the plaudits for his nine points, particularly the two late points under pressure to level it at the end of normal time, but I give the man of the match to goalkeeper Pat Grennan. He made a string of fine saves, particularly the one near the end, and without his agility and sharpness, Colaiste Choilm wouldn't have been in a position to be in search of an equaliser at the end.

Pat Grennan's save two minutes from the end was hugely important. Jack Higgins looked certain to goal, which would have put his side in an unassailable four point lead at that point, but Grennan advanced quickly from his goal to smother the shot and keep Colaiste Choilm's hopes alive.

Darren Bracken handled the game well throughout. He was consistent in his application of the rules throughout and there was very little quibbling with his decisions. He did delay the first half water break until the 22nd minute, despite officials from both sides trying to alert him minutes before than. Also there were no linesmen throughout the game.

Colaiste Choilm's never say die spirit was very much to the fore. Having conceded a goal to go two points down they looked to be in trouble. Legs looked heavy and they had failed to score in the half at that stage and,playing into the wind they faced a real uphill struggle. But they never gave up and kept going and were rewarded in the end.

Colaiste Choilm now move on to the Leinster semi-finals and can keep dreaming of provincial glory.

The Stradbally venue was in good knick for this game. On a crisp Winter's morning, the pitch held up well, even though it was probably a hit heavy which led to players suffering cramp.