Trim the masters as Clara go down in fiercely fought final

Card count a talking point as Meath champions too strong 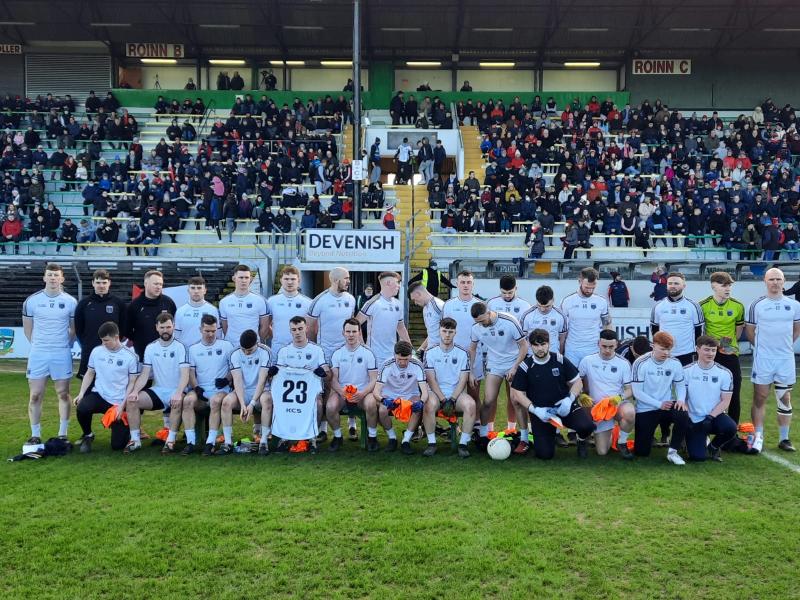 CLARA'S dreams of provincial glory went up in smoke as they fought to the bitter end in a Leinster Club Intermediate Football Championship final that provided tremendous entertainment and an abundance of talking points in Navan's Pairc Tealteann on Sunday afternoon.

First things first, the better team won. Trim played the best football on the day, they had the star players on the field and when the dust settles and Clara reflect on this, they will know that they didn't really perform to potential on the day.

In fairness to them, they came up against a very good Trim team. The Meath side were strong on the ball, full of running, they had a superb full forward in Aaron Lynch and they never really looked like losing.

It was a strange game. An under pressure and busy referee John Hickey showed three red cards, two blacks and eight yellows over the hour plus, yet it wasn't a dirty game, which says it all really. There was few truly dirty hits put in and while a lot of the cards may have been justified, that card count was just too high for the game it was. Trim bore the brunt of it, having two players sent off – Alan Douglas to a straight red in the 44th minute and corner back Gerry Dwane to a second yellow in the 54th minute. They also had Mikey Cullen off for ten minutes for a crucial ten minutes from the 41st minute after he picked up a black card.

It was fifteen against thirteen for five minutes before Clara veteran Matthew Mitchell went in the 49th minute after adding a black card to his earlier yellow Mitchell was very composed for Clara in the first half but his black was justified. Trim got five of the yellow cards, Clara three and the refereeing was a big talking point here. Clara to their credit scarcely put a foot wrong and were disciplined.

Trim's large support had been incensed at some of the decisions that went against them in the first half and a couple of these were certainly harsh. They were the architects of their own misfortune in the second half and for a few minutes, they did become ragged and rattled as the card count soared.

Yet Trim held their head, they weathered the storm and while Clara were alive right to the end, they never really looked like pulling it out of the fire.

The first half was a high intensity, absorbing, compelling affair as both sides attacked each other with great enthusiasm. Clara knew from the throw in that this was going to be a real battle for them. Trim led by 1-9 to 2-3 at half time and the Offaly side were just hanging in there – they were fortunate to be that close at the break as their two goals came against the run of play.

The two sides provided fantastic entertainment in the first half. Trim had a brilliant full forward in Aaron Lynch and he caused them fierce problems. He got 1-5 in the first half, 1-2 from play and his sixth minute goal put them 1-1 to no score ahead.

Clara hit back immediately with corner back Cathal O'Meara getting in for a well taken goal and points from Ross Brady and Matthew Mitchell pushed them 1-2 to 1-1 ahead after thirteen minutes.

Trim responded superbly. They looked dangerous every time they went forward, though some players were sloppy at times. They got four points without reply before Clara got a 21st minute goal against the run of play – the Meath defence went AWOL and Mitchell got the ball through to Ross Brady, who took his time and made sure of dinding the net, 2-2 to 1-5.

Again Trim's response was top drawer. They got four points without reply and a Ross Brady free left just a goal in it at half time.

Both sides swopped two points each in the opening ten minutes of the second half before the volume of cards changed the game. Clara had played their best football in that opening ten minutes. They were steadier on the ball and attacked with more purpose, yet they never took advantage of their numerical advantage. Trim were exceptional when down men – they worked terrifically hard and never allowed Clara onto the ball. They left just one man up front for much of this period but they kept possession well and Clara didn't do what they needed to in this period.

Ross Brady had pointed the free after Douglas's red card in the 44th minute, given for a tackle on Scott Brady but Eoin O'Connor got a fine point before Mitchell's dismissal made it 14 v 13.

Aaron Lynch converted a free before Dwane's second yellow card saw Trim's thirteen men take on Clara's fourteen for the last few minutes, Lorcan Hiney got it back to three points, 1-13 to 2-7 with two minutes left. Six minutes of injury time was played and Clara had a chance but again Trim's quality shone through as they broke forward at pace, lifting the siege brilliantly. Rob Bourke took a point when a goal was on to make it a four point game. Pa Smith's free cut it to a score again but sub Ciaran Joyce got a 65th minute point to put it beyond Clara's reach.

Clara will be disappointed at the defeat and their overall performance but they shouldn't be hard on themselves. They gave it their best shot and they came up against a very good Trim side. Clara achieved their 2021 priority when returning to senior football and will now have an off season before coming back training in a couple of months time.

Two of their most experienced players, Ross Brady and Matthew Mitchell were excellent for them in attack in the first half but it didn't happen for them in the second half as Mitchell was sent off, Brady taken off. Graham Guilfoyle worked very hard at midfield against a strong Trim pairing in Rob Bourke and Sean Fitzgerald – Carl Stewart was forced into a mainly defensive role by the Trim pairing who were well able to win ball and break tackles, even though they could also cough up possession.

Scott Brady disrupted their dominance for a period after coming on at half time while it never really happened for the Clara attack as a unit. Josh Fleming had his moments but Trim had a super centre half back in James Toher and won a lot of the individual battles.

Aaron Lynch (Trim): Aaron Lynch was magnificent for Trim. He was at the centre of everything they did in the first half and showed a great ability to show and win ball when left on his own up front for much of the second half. Clara never came to terms with him and while Ciaran Doyle tried very hard, the losers should have made switches to try and curb his influence.