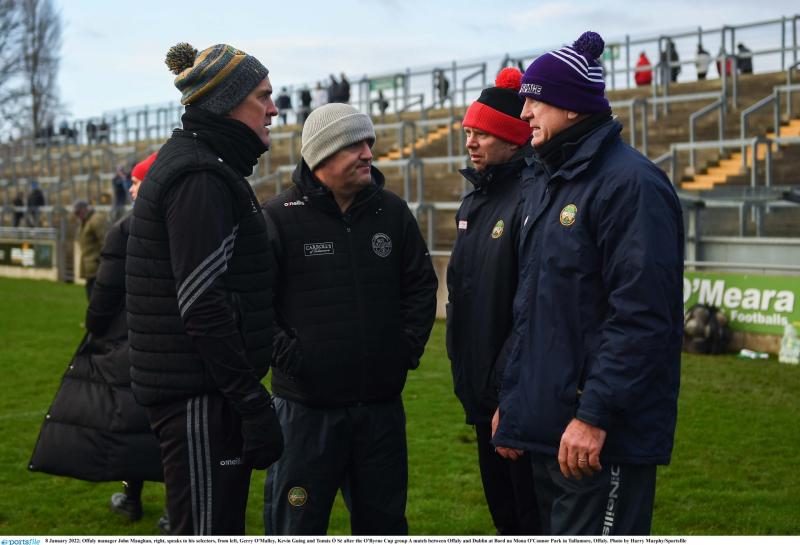 O'BYRNE Cup football in January will never define a team's season but Offaly manager John Maughan was still disappointed that they let an opportunity of a morale boosting win slip against Dublin on Saturday.

Offaly had an understrength Dublin on the ropes but couldn't get the job completed and Maughan reflected:

“I was disappointed we lost the game because I felt it was a game we could have won. Two points down at half time with the breeze to come, we gave away a sloppy goal at the start of the second half, but when we brought it back to a single point, wind-assisted, we should have won.

“I’m quite optimistic, I’m pleased with the honesty of the group and they worked hard. We’ve a lot of young debutants that stepped up from the U-20 campaign that stepped up there today. I’m particularly impressed with our full-back line, that’s a brand new full-back line, the two boys Ciarán Donnelly and Lee Pearson were exceptional. Rory Egan and Jack Bryant were impressive and there will be others that are not here due to Covid situations but they’ll be seen in the next couple of weeks.”

“It’s an opportunity to develop a little bit of cohesion in the group and to get together to compete in what’s going to be a very difficult Division Two campaign. There’s a lot of talented teams, Derry, Down, Meath, Roscommon, Clare, they’re all very good teams and we just have to survive in Division Two and that’s our challenge. That’s success for me, if we retain our Division Two status that’s a good year for us.

He spoke about Offaly's response to Dublin's first goal early in the second half.

“We have to take the positives out of it, but we can’t ignore that we had enough possession to win the game and we didn’t. Whether it was the sight of the blue jersey or not I don’t know, but we’ve a couple of areas on the pitch that we have to try and solve before we go into the first round of the league against Clare.”

Maughan was asked about the difficulty at the moment with Covid-19 rampant and players likely to be ruled out at any time.

“The phone is on all the time, the first thing we remarked when we came here was if we got any phone calls, did anyone else go down! I had three at home, Cathal Donoghue, Dylan Hyland and Bernard Allen with Covid at the moment. They’re hopefully going to come out but we have to see are they physically able to play the match on Wednesday. It’s all a new scenario for management, waiting for the phone call to see who exactly you’re going to have.”

It was Kerry legend, Tomas O'Se's first game as Offaly coach and Maughan talked about his influence.

“You can see it! Eight All-Ireland medals and All Stars galore, he’s a very influential guy. To have a guy like Tomás, who’s been there and done that, to be able to say to him to go over and have a word with that half back and tell him what to do, and instinctively, they’re listening. It’s a great coup for Offaly, I don’t know if he’d have come three or four years ago, but the fact that he has agreed to come on board this year is a vote of confidence in Offaly football.”

Offaly play Longford in the next round on Wednesday evening and will be without a number of players who are playing Sigerson Cup with their colleges.

“I played Sigerson, I’m lucky enough to have won a couple of Sigerson medals in my time, I respect the competition and I think it’s wonderful. I think we’ve 12 or 13 of our group who are going to be tied up with Sigerson midweek, I’m very conscious of it. I have encouraged all our lads to go and play Sigerson football and we’ll have 13 players involved on Tuesday and Wednesday, so we’ll be stretched on Wednesday evening (vs Longford) but that’s the challenge that we’ve got to embrace.

“Unfortunately there’s a back door in the Sigerson for the first time ever, so that in the middle of three O’Byrne Cup games in a week, we’re absolutely stretched. I’ve a couple of guys out injured at the moment, David Dempsey and Declan Hogan are out, both of those boys probably would have played today, so it’s a difficult time. It’s a difficult time for Wicklow, Waterford footballers last week as well, we’re all experiencing it.”