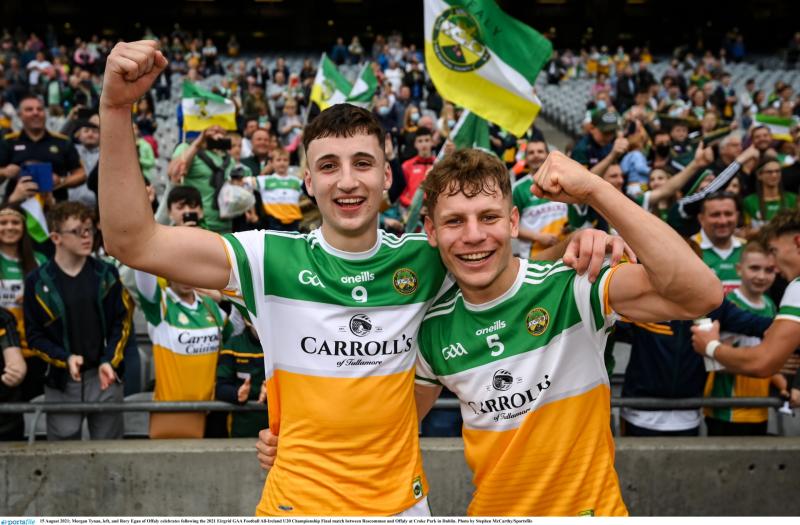 Offaly U-20 stars Morgan Tynan and Rory Egan have been selected for the O'Byrne Cup.

OFFALY senior footballers will field a mixture of young and experienced players when they get their 2022 season underway tomorrow with a home game against Dublin in the O'Byrne Cup.

Two of Offaly's All-Ireland U-20 All-Ireland football champions will make their competitive debuts, Edenderry's Lee Pearson and Ballinagar's Morgan Tynan. The team includes two of their team mates, Rory Egan (Edenderry) and Jack Bryant (Shamrocks) while there will also be a debut for Tullamore's Diarmuid Egan at centre half forward – Egan impressed as Tullamore won the Offaly Senior Football Championship in 2021 while his younger brother, U-20 star Cormac is among the subs.

The team includes several established players and Offaly will be hoping to give a good account against an experimental Dublin outfit.

Clara's Luke Kelly has returned home from America after missing his club's successful campaign in the Senior “B” Football Championship last year and he is among the subs.

The game takes place in O'Connor Park at 2.00pm and tickets are still available online.

Meanwhile the Offaly v Galway senior hurling Walsh Cup game in Ballinasloe has been sold out. The demand for this game has been heightened in Galway as it is Kilkenny legend Henry Shefflin's first game in charge and the 2,000 plus tickets have been sold.