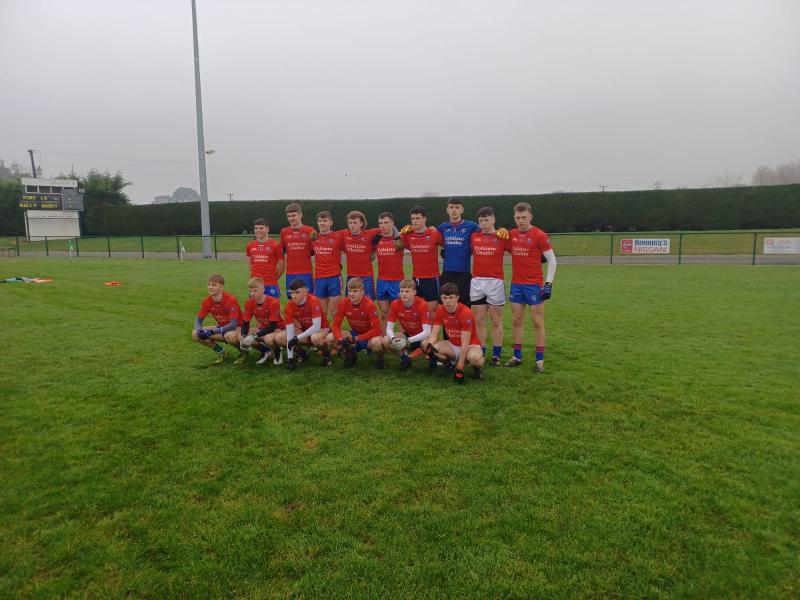 COLAISTE Choilm, Tullamore survived by their wits as they marched into the quarter-finals of the Leinster Colleges Senior Football Championship with a drama packed win over St Peter's of Wexford in Stradbally on Monday afternoon.

An injury time point from wing back Sam Bourke right at the end of extra time ensured an early Christmas present for Colaiste Choilm, who were pushed the whole way by St Peter's – they will face more Model County opposition when they face Wexford Schools in the quarter-final in the new year.

It was a gripping game of football, playing in very cold conditions and it was a massive win for Colaiste Choilm. It was a game that very nearly went wrong for them as they coughed up a five point lead near the end of normal time and it took a free from Harry Plunkett five minutes into injury time to give them an extra twenty minutes.

It was a devastating defeat for St Peter's and it was one of those games where it was a shame that there had to be a loser. It could have swung either way and neither side could have complained at losing. They were marginally the better team in normal time and looked to have the game won when a punched goal from Robbie Gallagher pushed them 2-8 to 0-9 ahead with four minutes left.

It was a huge lead at that stage but St Peter's staged a sensational recovery. They got a scrambled goal with Conor Murphy appearing to get the final touch amid a flurry of bodies to bring them back into it with two minutes left - it was almost kept out by goalkeeper Pat Grennan who impressed with his calmness. Suddenly Colaiste Choilm were buckling at their knees. An increasing volume of error had crept into their games for a few minutes before the Peter's goal and it reached critical proportions as St Peter's tore into them.

Alan Mahony, Luke Murphy and Daniel Ormond got points to put them a point ahead with three minutes of injury time gone. Colaistre Choilm were at the mercy of the referee, he allowed a generous additional two minutes and they got the equaliser when the inform Harry Plunkett calmly slotted over a difficult free after he had been fouled – the final score in normal time was Colaiste Choilm 2-9, St Peter's 1-12.

A defeat would have been a shocking pill for Colaiste Choilm to swallow but they were hugely relieved to get the extra time. With tiring bodies and players cramping up all over the field, extra time was a lottery. St Peter's took a decisive advantage with points from Luke Murphy and Alan Mahony (free) and Colaiste Choilm were in trouble. They broke for two crucial points in the closing two minutes of the first period. Harry Plunkett once again got a fine free and then Robbie Gallagher got a good point from play to make it all square, 2-11 to 1-14 at the end of the first period.

Both sides visibly wilted in the second period of extra time and there were very few chances. The only point was a dramatic one, a minute into injury time. Cathal Ryan was desperately unlucky to see his excellent free from out on the right wing curl in beautifully only to bounce back into play off the top of the crossbar. The ball eventually broke to Sam Bourke and his high shot floated over the bar – his shot may have been in the kick and hope category but he was right to have a pop and it paid off.

Colaiste Choilm had made a dream start with Harry Plunkett converting a penalty after the hard working Joel Troy was fouled in the fourth minute. St Peter's levelled it up with three on the trot but after this Colaiste Choilm were the better team and they deserved their half time lead of 1-5 to 0-4. The only downside was that all their scores had come from Harry Plunkett and only two of those were from play, super points that put them 1-3 to 0-3 ahead.

The winners had been fortunate when Tiernan Doyle hit the post with a goal shot – St Peter's hit the post another three times with point shots during the afternoon and that shows how close they were to the win. St Peter's rallied powerfullywith three in a row bringing it back down to a point, 1-7 to 0-9. A Plunkett free and Gallagher's punched goal after Plunkett's excellent point shot hit the post put Colaiste Choilm 2-8 to 0-9 clear but they were forced onto the back foot in the remainder and just survived.

It was an absolutely compelling game of football, playing with a fierce intensity and tremendous commitment. Colaiste Choilm's work rate was excellent and they turned over a lot of ball. They also made mistakes but most of these came late on when they were trying to protect their lead and when they were out on their feet, wrecked.

It is their first run at top flight football since the early 1990s and it is great for them to reach the quarter-final. They may not have the magic they need up front to win this championship, the Jack Bryant type figure they had last year when they won the “B” title, but they are very competitive at this level and that is a very good thing to see.

Harry Plunkett was their star man here while Ben Heffernan, Diarmuid Finneran, Cathal Ryan and Daire McDaid excelled in what was an overall superb defensive performance. The defence certainly laid the foundations here as St Peter's had two brilliant forwards in Alan Mahony and Luke Muprhy. Murphy cut loose with five points from play and converted almost every chance he had while McDaid was giving the man marking job on Mahony and he was superb, sticking to his task manfully and doing the simple thing, getting hands in and cutting out ball, so effectively. Jack Daly was also super when introduced, showing a tremendous appetite for battle and winning crucial ball.

Harry Plunkett ran the game from midfield while Cillian Martin used his physicality to telling effect. Up front, Colaiste Choilm did find the going tough. Robbie Gallagher was the only forward to score and he showed very well for the ball, though he will be disappointed at a few of his misses while Joel Troy worked very had and Dan Bourke got through a mountain of good work.

Harry Plunkett (Colaiste Choilm): Luke Murphy almost won the game for St Peter's but Harry Plunkett was the standout figure here. He scored 1-9 out of 2-12, with two excellent points from play. He was wonderfully composed on the ball and really lorded the midfield zone for most of normal time. His distribution was excellent and he showed fantastic nerves with the injury time free to secure extra time – it was not a simple free. The Tullamore man tired in extra time but his influence was pivotal to their win.

Darren Bracken had a solid game. There were a couple of questionable calls and St Peter's could quibble at the five minutes of injury time he played in normal time but overall, he was fair and it was great to see four neutral umpires present and wearing their jackets. The only real complaint was that he didn't stop play for a head injury to Cathal Ryan in the first half. Players can and do make a meal out of injuries but Ryan went down holding his head a minute or so after shipping a heavy hit in the middle of the field and referees really should error on the side of caution. The Daingean man did look dazed though he did brush it off and went onto have a fine game.

This Colaiste Choilm team is beginning to capture the attention of football supporters in Tullamore and surrounding areas. There was a real old boys feel to it here with former students making the trip to Stradbally. The manager is a former student Mark Plunkett and there was a large crowd here. It was great to see recent former students such as Brian Duignan, Ross Ravenhill, Ciaran Burke, Stephen Fitzgerald etc here to support club mates and family while there were also plenty of ex students from the 1980s, 1990s and 2000s. This team is completely honest and is worthy of this support.

The Stradbally pitch was excellent considering the time of year and the game was well hosted.

Colaiste Choilm play Wexford Schools in the quarter-final in the new year.