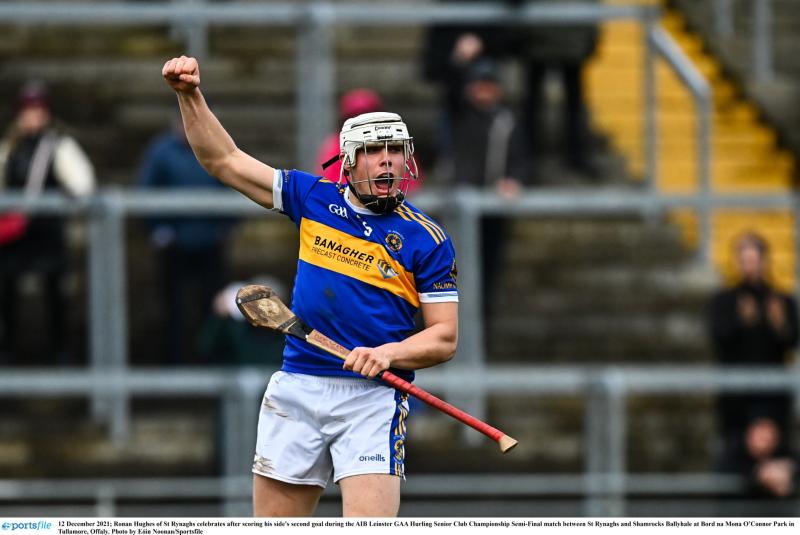 St Rynagh's ended up well beaten by nine points but they had this game won in normal time and were only denied a famous victory by a scrambled Eoin Cody goal with three minutes of injury time almost up. St Rynagh's deserved to win in normal time, they had shown terrific character to recover from a shocking start and it looked like they would take a famous scalp when they led by three points with two minutes plus injury time left.

The three in a row Offaly kingpins probably should have closed out the deal as they missed chances when Ballyhale were on the ropes, at the mercy of any sort of a knockout punch. Ballyhale also missed easy scores but were out on their feet and their injury time goal came after a “65” dropped into the goalmouth. It was a last throw of the dice for Ballyhale and they took full advantage in extra time.

They had played with only fourteen men from the end of the first half when Joe Cuddihy was red carded for a swipe across Matthew Maloney. Eoin Reid brought their quota back up to fifteen for extra time and they were complete masters here. St Rynagh's never recovered from having victory snatched from their grasp and Ballyhale, seeking three All-Ireland titles in a row, ran riot.

They outscored St Rynagh's by five points to one in the first period of extra time, six points to one in the second period but the final scoreline in no way represented what happened in this game. It was an extraordinary, drama packed game that provided fantastic entertainment for the large crowd. It was absolutely enthralling and St Rynagh's were in very hard luck not to win. They were the better team in normal time and really should have won.

While the extra man was a big factor and Stephen Wynne thrived in this role, St Rynagh's were already fighting hard after finding their feet following that dreadful start.

St Rynagh's worse nightmare began to unfold very early in the play. They got the first point from Luke O'Connor but by the time O'Connor got their next from a 14th minute free, Ballyhale Shamrocks had 2-4 on the board.

Two goals in the space of a minute in the fourth minute really knocked the stuffing out of St Ryangh's. The first came from Eoin Cody after Conor Clancy and the Rynagh's defence failed to clear their lines and Colin Fennelly got their second moments later. It was 2-5 to 0-3 at the water break and Rynagh's were in urgent need of scores.

They showed real character to fight their way back into contention in the second quarter. Their work rate jumped considerably and suddenly Ballyhale didn't have the time to do as they wished. Sub Ronan Hughes, Paul Quirke and Aidan Treacy (free) got points to bring the deficit back to 0-6 to 2-7 and Rynagh's got a goal in the 22nd minute. Stephen Quirke did very well to work the way in from the right wing and Luke O'Connor had the time and space to bat the ball into the net.

Stephen Quirke pointed to reduce it to a goal, Adrian Mullen got a crucial point for Ballyhale but the visitors were reduced to fourteen men when Joe Cuddihy saw red for slicing across Matthew Maloney. Aidan Treacy got an injury time free to make the half time score, 2-8 to 1-8 – having looked dead and buried after fifteen minutes, St Rynagh's were very much alive and kicking at the break.

The Offaly champions continued their excellent work after the restart and Ballyhale were soon very worried. It was a one point game, 2-9 to 1-11 after 39 minutes and Rynagh's were unlucky to have an Aaron Kelly goal disallowed after Ronan Hughes was penalised for fouling the ball. Paul Quirke got two excellent points, Luke O'Connor a free as Rynagh's got onto level terms, 1-14 to 2-11 at the second half water break.

A superbly taken Ronan Hughes goal gave them the lead after the resumption and with a numerical advantage, a famous victory was within grasp. The closing ten minutes were full to the brim with drama. Two TJ Reid points, one from a free, sandwiched a fantastic Luke O'Connor point. Aidan Treacy had a poor wide from a “65” and also dropped a shot short in open play but at the other end, Ballyhale were also showing feet of clay,

Luke O'Connor's 58th minute free put St Rynagh's three points up, 2-16 to 2-13 and with three minutes of injury time announced, they dug in desperately. It looked like they would hold on but when a “65” was dropped in with the three minutes almost upo, Eoin Cody scrambled the equalising goal, 3-13 to 2-16 and a very relieved Ballyhale had extra time.

Ballyhale were back up to the full quota for extra time with Eoin Reid coming on and they really made it count. Their reprieval was like a breath of fresh air to them and they tore into St Rynagh's with real abandon. They got five quick points to take control and Luke O'Connor had a wide from a free before converting one to leave St Rynagh's trailing by 3-18 to 2-17 at the break.

It was difficult to envisage anyway back for St Rynagh's and so it proved as Ballyhale Shamrocks sauntered across the line, scoring six of the last seven points for an ultimately facile win.

It would have been a famous win for St Rynagh's and it was within touching distance but no one will be critical of them – ironically, they had defeated Coolderry in the Offaly final with a late goal and it was a similar sucker punch that broke their hearts here.

They showed great character and honesty once they found their form and confidence after those first few minutes and they had players standing up all over the field. Stephen Wynne was magnificent as the spare man while Ben Conneely and Matthew Maloney excelled in their defence. Joseph O'Connor worked his socks off at midfield, Aidan Treacy got through a lot of good work here and Ronan Hughes was excellent when introduced – he was a major factor in St Rynagh's going so close in normal time, scoring 1-2.

Paul Quirke was the star man ip front while his brother Stephen and Luke O'Connor had superb spells. The work rate of Sean Dolan was once again inspirational. St Rynagh's did have limited options on the line once Ronan Hughes and Aaron Kenny had been introduced and as bodies grew tired, they didn't have players to really change things – Ciaran Flannery was brought on, taken off and brought on again in the last 20 minutes, though his first introduction was a time wasting exercise while St Rynagh's could have done with a fully fit Niall Wynne.

Paul Quirke (St Rynagh's): A late replacement for Ronan Hughes, Paul Quirke had a sensational game. He got four points from play, was skilful and distributed the ball well. He was a major factor in St Rynagh's being so close at the end of normal time. Adrian Mullen was brilliant for Ballyhale while TJ Reid came good late and several other players had good spells.

Chris Mooney had a good, steady game though the sending off was questionable. Joe Cuddihy's slice on Matthew Maloney looked more careless than malicious. It may have qualified as dangerous play and that is a red but if a yellow card was shown, St Rynagh's would not have said a whole lot. It was a tough game and Mooney was always in control.

Considering the December setting, the weather was remarkably mild and as you would expect, the O'Connor Park pitch was in top order.