US athletics scholarship for Ballycommon and Tullamore athletes 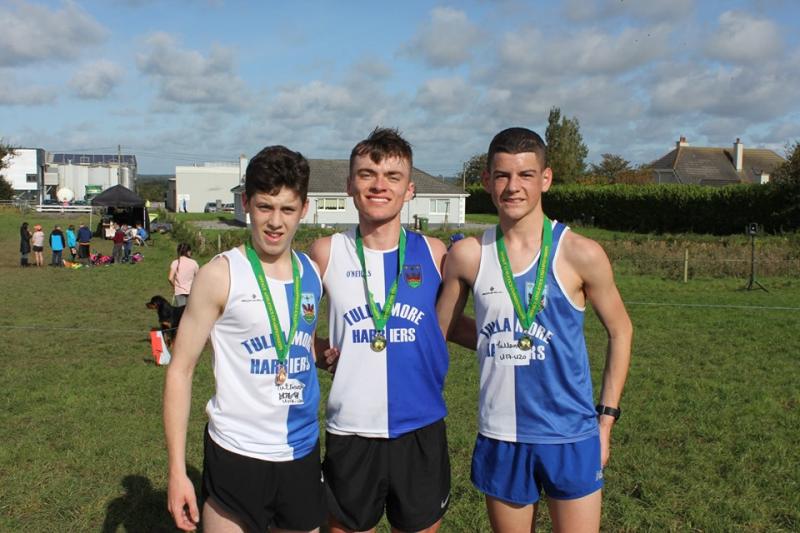 TWO more members of Tullamore Harriers have won athletics scholarships to the USA. Ballycommon man James Dunne has gone to Alamosa in Colorado earlier this month while Tullamore woman Nadine Donegan is heading to Iona College in New York before the end of the year.

They are part of a golden generation of young Tullamore Harriers athletes who have won a series of national titles and medals throughout juvenile and junior ranks, posting some fantastic times along the way and coming to the attention of US college athletics coaches.

Another Tullamore Harriers' runner, Laura Mooney headed to Providence College in Rhode Island last week – where she will combine her running duties with biology studies.

Meanwhile there was disappointment for athletes from Offaly, Kildare and Laois when they were told over the weekend that they can't compete in the first weekend of the national senior and U-23 track and field finals. The longest consecutively running national athletics championships in the world, dating back to 1873, Athletics Ireland announced a new Covid-19 friendly format this year with the finals, incorporating the U-23 championships, taking place in Morton Stadium, Dublin over two weekends – August 23/24 and 29/30.

The competitions will be closed to coaches, media and spectators and only athletes, officials and event staff will be allowed on site. The first weekend will include mens' and womens 5,000m, 400m, 400m hurdles, 1,500m and field events including the hammer, high jump, javelin and long jump. Tullamore Harriers generally send a strong team to these finals but they were disappointed to be informed that they can't compete on the first weekend because of the Covid-19 restricitions for Offaly, Laois and Kildare.

The restrictions are set to end on Sunday, August 23 at midnight and there had been optimism that athletes may be allowed to compete under a guideline allowing elite sports people to perform. However, this has now been dashed by Athletics Ireland who told clubs that athletes in the locked down counties can't travel to the championships – however, there is a loophole for athletes affiliated to Offaly clubs but living outside the county, and they can compete.

The restrictions will be reviewed by the Government and health authorities before this weekend and while they will be hoping for the restrictions to be lifted on the Friday night, thus allowing all athletes to compete, this is not the case at the moment. The second weekend includes events such as the 200m, 800m 100m 3,000m steeplechase, 10,000m, discus, triple jump, shot putt and pole vault. Tullamore Harriers have some excellent 800m runners and they may compete in the second weekend if the restrictions are lifted.

Apart from that, however, training has been going on in most Offaly clubs and the latest scholarships represent an amazing run of success stories and opportunity for a generation of runners who have captured the imagination at Tullamore Harriers.

Ballyfore man, Aaron Mangan is in Fort Hays, Kansas on scholarship, though he was home in recent months while Edenderry woman, Niamh O'Connor has just finished one in Iona College, New York,

One of the brightest prospects in the country, Killeigh man Mark Milner, a fantastic 800 metre runner, has opted to stay at home and avail of a scholarship in UCD.

An Emo girl and Tullamore Harriers' member Ava O'Connor is still in secondary school but is certain to attract offers from both the USA and the states. Ava has developed as a great 1,500 metre runner at Tullamore Harriers and has competed internationally for Ireland.

The group have come through the booming juvenile system at Tullamore Harriers, overseen by head juvenile coach Damian Lawlor and a host of other excellent workers.

James Dunne has taken a full athletic scholarship at Adams State University. Alamosa is located 220 miles south of Denver in the centre of the San Luis valley.  It’s altitude of 7500 feet make it an attractive spot for distance runners like James who can benefit hugely from altitude training.

“The success of Adams State coaches with Irish athletes training at altitude was seen not long ago at the 2019 European Cross Country in Lisbon. It was amazing when the Irish women’s under-23, team had Stephanie Cotter from Cork winning individual bronze, while Stephanie along with twin sisters Eilish and Róisín Flanagan from Tyrone were part of a six person squad that won team silver medals. All three attend Adams State University.

“Eilish Flanagan had earlier in 2019 won silver in the European Under 23 Steeplechase in Gävle in Sweden, a championship which both Stephanie and Roisin had also qualified for.

“It was also Adams State where 1996 Irish Olympian Shane Healy went to college. In recent weeks a very popular RTÉ podcast has featured Shane’s story and he puts a lot of his success in running 3.35 for 1500m down to his experiences in Adams State. In addition Daniel Caulfield who ran 1.46 and 3.41 for 800m and 1500m attended the college and went on to run in the World Championships in 2001.”

Nadine Donegan is a member of a very well known Tullamore running family. Her father John has been a sterling Tullamore Harriers runner for a few decades while her mother Marie is also a keen runner and club member. Younger sister Danielle is also a runner with great potential while older brothers Jason and Mark (now living in Australia) have done very well on the midlands club racing circuit. Younger sister Rachel and brother Jack, also a talented footballer and soccer player, are also keen developing runners.

Nadine, a nursing student in Ireland, will head to the the New York college before the end of the year and she has made vast improvements in the last couple of years – she has ran most mid distance events from 5,000 metres down.

The last time there was such a spate of scholarships from Tullamore Harriers to the USA was back in the 1970s and 1980s when athletes such as Kevin Breen (Birr), Tommy McCormack (Mullingar), Louis Kenny (Westmeath), Charlie Milner (Walsh Island), Dermot Dolan (Mullingar) and Martin Flynn (Longford) accepted offers in various colleges. Some of these remained on in the States, where they still live.

Martin Flynn, a brother of one of Ireland's top runners in the 1980s, Ray Flynn, lived in Tullamore, where he worked in a bank at the time of his offer while there was a large Westmeath presence in Tullamore Harriers in that era as there was no club between Mullingar and the Offaly capital – the club still has a number of members from the Kilbeggan and border areas.

The first Tullamore Harriers' member to be offered a scholarship to the USA was Mick Neville in the early 1960s. Lynally man, Neville had an offer from Idaho University in 1961 but eventually it fell through due to a new US athletics scholarship age ruling – then 21 years of age, the ruling meant that he would have been eligible to compete for only one year of his three year scholarship and the univeristy pulled out.

Neville and Rhode man John O'Toole were Tullamore Harriers' greatest male performers – he competed in the International Cross Country Championships in Sheffield in 1962, the predecessor to the modern World Cross Country Championships. He broke the European indoor three mile record in Wembley in 1962, though he didn't hold the record as he finished second, just a hair's breath behind the winner, Derek Ibbotson of England – Neville ran 13.45.2 with Ibbotson home in 13.44.8.

Neville had a very distinguished history. Now living in Waterford, he transferred from Tullamore Harriers to Donore Harriers in Dublin in 1961 after the Harriers was suspended following a famous row at a cross country championship in Tallaght – there had been controversy over the eligibility and transfers of some Harriers' members at that time. Ironically the transfer allowed Neville to compete for Ireland, an accolade which he couldn't achieve with Tullamore Harriers, who were an NACA club during those tumultuous split years in Irish athletics. He subsequently went to Coventry in England to live and work before returning home and having some fantastic runs with Tullamore Harriers as a veteran athlete.