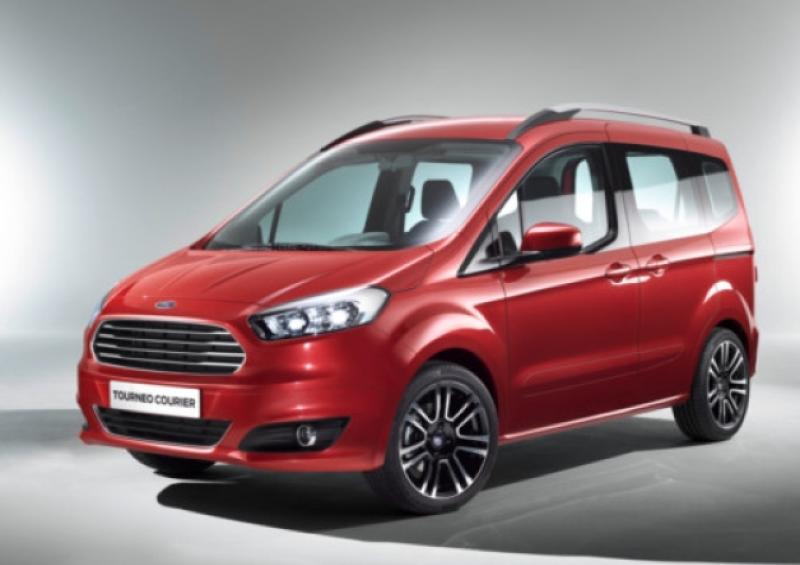 Ford’s compact and stylish all-new Tourneo Courier people-mover made its global debut at the 2013 Geneva Motor Show as the company continues to accelerate its product-led transformation in Europe.

Ford’s compact and stylish all-new Tourneo Courier people-mover made its global debut at the 2013 Geneva Motor Show as the company continues to accelerate its product-led transformation in Europe.

Offering class-leading space, practicality, fuel economy and safety features, the all-new Tourneo Courier completes the new full lineup of four Tourneo people-movers that are displayed together in Geneva for the first time, and will be introduced to the European market by mid-2014.

“Tourneo stands for smart, do-anything vehicles that are designed for people who live life to the fullest,” said Barb Samardzich, vice president, Product Development, Ford of Europe. “However big your personal mission, we have a Tourneo people-mover that will help you squeeze the most out of every moment– whether that’s cycling with friends or a day with the kids.”

Sitting alongside the “MAX” range of multi-activity vehicles in Ford’s passenger car portfolio, the new generation Tourneo models are versatile people-movers with from five to nine seats.

Following the debut of the new Tourneo brand at Geneva, Ford will launch “Operation Tourneo”, a program that will give passionate teams across Europe the chance of using a Tourneo as a support vehicle for their next mission.

The five-seat Tourneo Courier is the most compact member of the exciting new Tourneo family, and expands Ford’s people-mover range into the small-car segment.

“Tourneo Courier packs an unbelievable amount of space into a small package, but without losing any of the convenience and nippy handling of a compact car,”Samardzichsaid.“Families will love the Tourneo Courier’s stylish looks and versatile interior; and appreciate the fuel economy, value for money, smart technologies and advanced safety features that set it apart from the crowd.”

The all-new Tourneo Courier is based on Ford’s latest global small-car platform, shared with models including the Fiesta and B-MAX. With an overall length of 4.16 metres, the new model offers ample space for five people and their luggage, with the agile handling and manoeuvrability of a compact car. A four-seat configuration is offered for the Turkish market.

With its strong rising shoulder line, slim headlamps and high-mounted signature trapezoidal grille, the Tourneo Courier demonstrates the dynamic character of Ford’s global design language, both outside and inside, where bold graphics complement superior quality and high levels of craftsmanship.

The Tourneo Courier’s twin rear sliding doors provide best-in-class access, while 60/40 split folding rear seats offer outstanding space and flexibility. Smart stowage features include an adjustable package tray in the luggage area with multiple height positions; a “mega-centre” console capable of storing A4 documents and small laptops; overhead stowage; and a storage drawer under the driver’s seat. A unique device dock in the centre of the instrument panel enables occupants to store, mount and charge mobile devices including phones and satnavs.

Highly-efficient diesel and petrol engines target best-in-class fuel economy, with the option of Auto-Start-Stop on all units. Customers can choose between 1.5-litre (75 PS) and 1.6-litre (95 PS) Duratorq TDCi diesels, and the remarkable 100 PS 1.0-litre EcoBoost petrol engine, the “International Engine of the Year” 2012.

The Tourneo Courier is scheduled for launch in spring 2014, and will be produced at an all-new facility within the Ford Otosan plant in Kocaeli, Turkey.

Standing out from the crowd with its dynamic, modern appearance, the Tourneo Connect delivers a bold new look to this class of people-mover. A stylish cockpit constructed with meticulous attention to design and craftsmanship offers an attractive and comfortable interior.

Inside the spacious and versatile cabin, the Tourneo Connect offers outstanding practicality for active families, with sliding rear doors, highly flexible seating and a host of smart stowage areas including aircraft-style overhead lockers above the rear seats. The seven-seat Tourneo Grand offers first-in-class fold-flat seating, enabling customers to fold both second- and third-row seats to create a huge, flat luggage space area. The front passenger seat can also be folded to allow extra-long items such as flat-pack furniture to be easily carried.

The Tourneo Connect targets best-in-class fuel economy by offering a choice of highly efficient diesel and petrol engines, and Ford ECOnetic Technology features including Auto-Start-Stop and an Active Grille Shutter system. The powertrain lineup in Europe includes the 1.6-litre Duratorq TDCi diesel with a choice of 75, 95 and 115 PS versions, and the 100 PS 1.0-litre EcoBoost petrol engine, plus a version of the acclaimed 1.6-litre EcoBoost engine available with a six-speed automatic transmission.

The dynamic new Tourneo Custom, launched last year, delivers ultimate space and versatility, offering generous accommodation for up to nine occupants and their luggage. Now on sale across Europe, the new model broke new ground in its segment as the first vehicle to achieve the maximum five-star safety rating from Euro NCAP.

The all-new interior is constructed with high quality materials, and is available in a choice of eight- or nine-seat configurations. The seats in the two rear seating rows are a new design that can be easily folded into multiple configurations and removed in segments or completely – offering more than 30 seating permutations.

Two vehicle length options are available, with overall lengths of 4.97 metres and 5.34 metres; the longer model provides extra luggage space behind the third seat row. All versions come with twin side sliding doors as standard and a wide-opening tailgate.