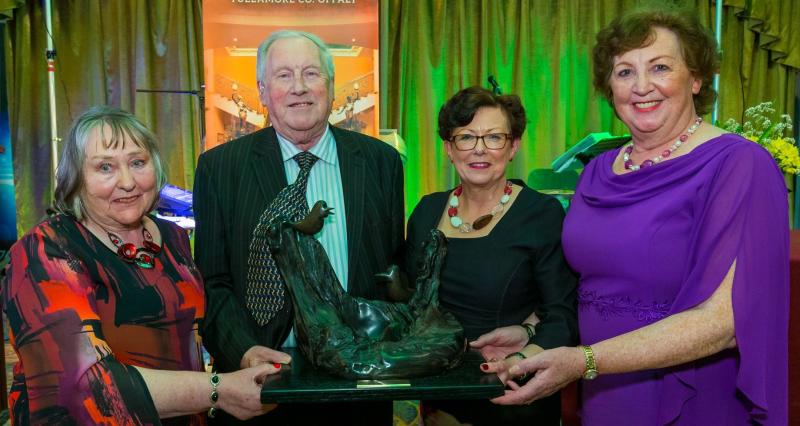 TWENTY nine people have been nominated for the 2019 Offaly Person of the Year Award.

The nominees come from all walks of life and are scattered throughout the county.

The award, together with the Unsung Hero of Offaly honour, will be presented at a gala dinner in the Bridge House Hotel on Saturday, March 28 next.

This is the 61st dinner dance to be hosted by the Offaly Association, Dublin.

Tickets for this prestigious event are €40 and will be on sale in the coming weeks.

Details of the first 14 nominees are published below while the remaining will be published in next week's edition of the Tullamore Tribune.

For her work in the parish and community and in particular her guidance for the Shinrone Heritage Group WW1 project.

For her contribution to journalism nationally and internationally, especially her work as RTE correspondent in London.

For her inspirational work with young people and her commitment to badminton in Killoughey and Offaly over four decades.

For having the courage to step forward and address the barriers to reproductive healthcare and her role in the abortion rights campaign.

For his work with Offaly Historical and Archaeological Society, the Order of Malta, Civil Defence and other voluntary groups in Tullamore.

For his contribution to local business and his development of the Glenisk brand as a world leader in its field.

For his work locally, nationally and internationally to promote all things connected with Moneygall.

For his tireless and energised humanitarian work for the under-privileged and for all those touched by his generosity of spirit.

An outstanding businessman, blessed with creativity and inventiveness, who has given employment to so many in the county.

For her dedicated and passionate support of business through her work with Tullamore Chamber of Commerce allied to her work with Special Olympics, Dochas, homeless etc.

For his commitment to promoting all things Offaly and his amazing victory in the British Open in Portrush.

He has given a lifetime of commitment to a large number of organisations in his native Durrow and in Tullamore including Civil Defence, St Patrick's Day Parade committee, Durrow Hall and Graveyard committees, Tullamore Show, Suicide Awareness and many more.

For his dedication and commitment to the health services and his work for Offaly Hospice and Dochas.

Despite just being aged 11 years, she has raised awareness as well as huge sums of money to buy much-needed supplies for the homeless.