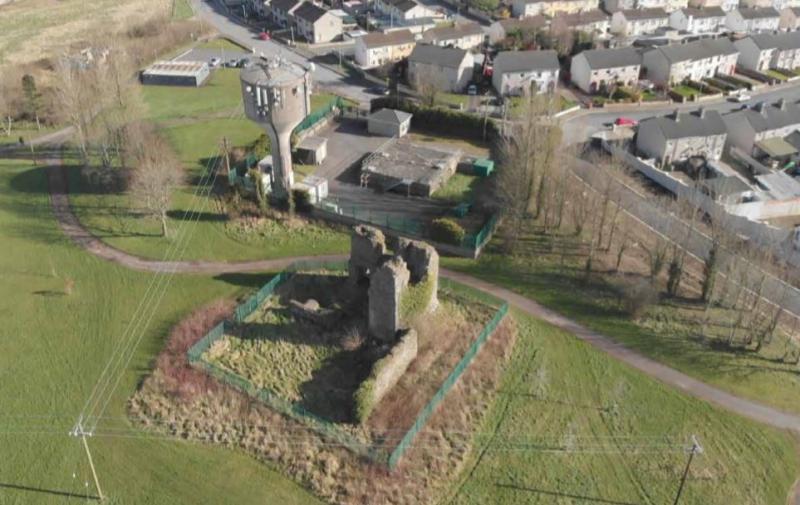 The Blundell Castle ruins are included in the Edenderry masterplan area

AN online consultation is currently underway on the new plan for Edenderry town centre.

The 'Blundell Masterplan – The Heart of Edenderry' is available for viewing on the County Council's website, offaly.ie and the public have been asked to give their opinions on the project before June 1.

The aim of the masterplan is to set out a long-term blueprint for a 33-acre site at the back of JKL Street which stretches as far as Blundell Park and the castle ruins.

One key objective is the relocation of the town's library to a corner site on JKL Street across from O'Connell Square.

An online survey asks the public what they think the key issues for the area are, specifically mentioning housing and office space, the creation of a new street in the 'backlands', whether there should be a bridge across the Grand Canal, the building of a library and arts centre, a primary care centre, the restoration of the castle and improvements to the park.

Consultants Paul Hogarth Company and McGarry Consulting were commissioned by the council last September to come up with preliminary proposals.

Critical areas for Edenderry include addressing limited employment opportunities locally, reducing the high levels of commuting, revitalising the town centre and connecting JKL Street with the lands around the park and castle.

The consultants say the plan aims to unlock the potential of the Blundell site and drive the regeneration of the town.

The former Tesco store is part of the development and is seen as one of the most important sites for redevelopment in the town centre.

Mark Mahon, area engineer with the council told last week's meeting of the Edenderry Municipal District that Covid-19 restrictions had affected the “normal public consultation” on the project so the consultants had arranged to put a questionnaire and video online on May 11.

Mr Mahon said the consultants will consolidate the feedback from the public and a presentation will be made to councillors.

On the question of when that report will be available, Mr Mahon said: “It depends on the amount of information that comes back and how long it will take to integrate the various different opinions and consider it in depth.”

Cllr Eddie Fitzpatrick, Municipal District chair, said there is great potential in the plan and he encouraged the public to make their views known.

Cllr John Foley, Independent, said opening up the area presented a great opportunity to draw business back to the town and stated that the Covid crisis had shown that many people wanted to work from home, or nearer home.

“I'd urge all people out there, everybody, to have a look at it and give their opinions on it,” said Cllr Foley.

Cllr Noel Cribbin, Fine Gael, also asked the public to participate in the consultation and said it should be remembered that Rural Affairs Minister Michael Ring had allocated the first €100,000 towards drawing up the plan.

Cllr Robert McDermott, Fianna Fail, said the plan presented Edenderry with a wonderful opportunity and he highlighted the number of people currently commuting from Edenderry, saying the “average commute” time was 11.2 hours.

“That's another working week every month,” he remarked.

Cllr Liam Quinn stressed the importance of the people having their say because previously, when work was being done on JKL Street “one of the problems was people thought they didn't know enough about it and problems arose when the work was done and it was too late”.

“This really explains to people what we hope to do with that part of the town,” said the Fine Gael councillor.

He said what he liked about the plan was that the consultants had “left it very broad”, noting that “a green field is a blank canvass” and it has been left to the people to have their say on it.

“In all my time on the council I don't know if I've seen anything as well put together and cohesive and co-ordinated,” said Cllr Quinn.

“It's probably a once in a generation chance to join up the dots in the town in the way that we haven't done before and if we get it right we'll have a town that functions very well.”

Cllr Mark Hackett, Green Party, said what impressed him was the emphasis in the plan on reconnecting the “working areas” of the town with the environment by linking the town, the canal and the park.

The plan and questionnaire can be viewed on offaly.ie and edenderrymasterplan.com