“They're causing huge distortion in the road surface” 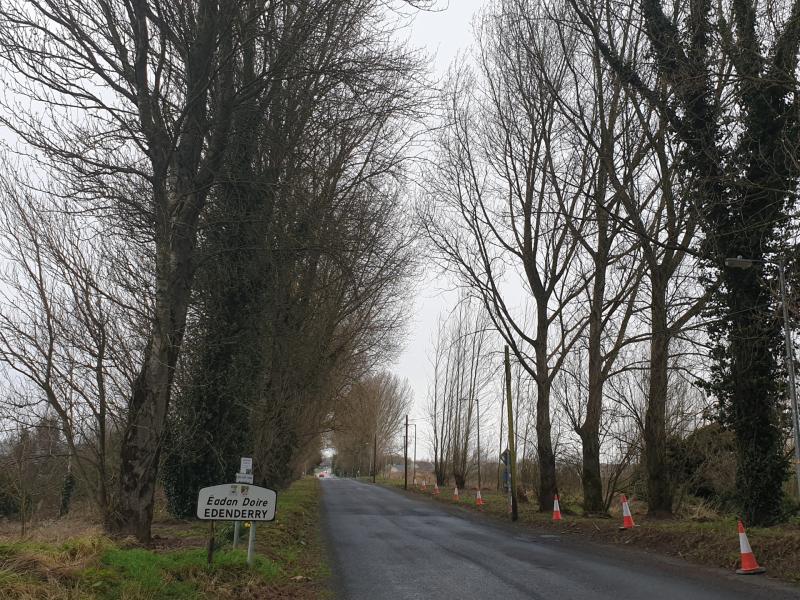 A ROW of trees on one roadside in Offaly is scheduled to get the chop, the County Council has decided.

An arborist has examined the poplar trees beyond Fr Paul Murphy Street in Edenderry and concluded they are dangerous.

A meeting of Edenderry Municipal District was told they will be cut down on a phased basis.

In all, their removal will cost €40,000, area engineer Mark Mahon told councillors.

Mr Mahon was responding to a query from Cllr John Foley who noted they were “heavily leaning over” on the right hand side as one drove towards the tunnel on that road.

“They're on a bank and there's nothing supporting them. Some of them may be dangerous,” said Cllr Foley, asking if they could be supported.

Mr Mahon agreed that the trees are starting to list but said the root system particular to that variety tree does cause problems.

“They're poplars and their roots come straight out so they're causing huge distortion in the road surface there. So we're starting a programme there this year of cutting them down,” he said.

The action is being taken because of safety concerns and he estimated about a quarter of them will be gone this year.

Cllr Noel Cribbin said the removal will have to be explained to residents because some of them opposed a similar idea previously.

He agreed they were dangerous and were causing the road to sink and recalled two years earlier when money were spent at the entrance to the soccer club but there is now a “deep dip” there again.

“They do give lovely foliage when you come into the town but they are dangerous. I do ask when they're taken down that they are replaced with some sort of a tree that will suit the area and will look nice coming into the town.”

Mr Mahon said different people had different opinions on the trees, hence the appointment of an expert arborist.

“Really the only opinion that counts is the person who's qualified to make a call on it,” said the engineer.