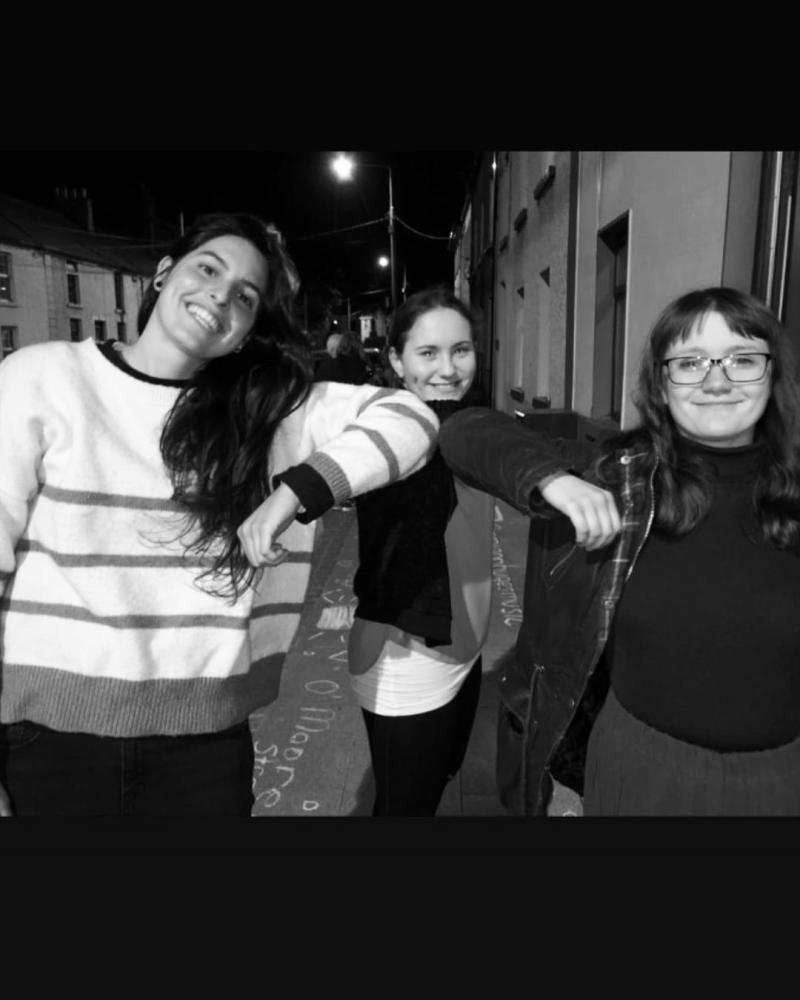 A YOUNG woman from Catalonia, who came to Tullamore to work in the childcare sector just before the Covid-19 lockdown, has been given a heatry send-off by her neighbours and new-found friends in O'Moore St and Cormac St.

Berta Dalmau Tur came to Ireland in February to work in Grovelands Childcare but she was caught up in the lockdown announced by the Government only a month later due to the coronavirus pandemic.

But despite the daunting situation she found herself in Bertha managed to forge friendships with her neighbours in O'Moore St in the heart of the Offaly capital.

Maryann Hughes, speaking to the Tribune last week, said she got to know Bertha “because she lived right next to me in the apartment above Smyth Stapletons Solicitors.”

Over the following weeks and months the duo became great friends and took part in the popular music sessions held each weekend on the footpath in O'Moore St.

Maryann takes up the story: “Unfortunately, with everything going on, Berta decided that she would cut her year of work short and go back home to Catalonia.”

“Because of this, we had a bit of a send off for her the week before she left. That night was certainly the best night of all of the sessions. As usual, we kept everything social distanced but we had some newcomers and an even bigger crowd than usual, seeing as this was our last concert with Berta.

“We had the Grennan family join us; Mike, Caroline, Joe, Connor and Maeve. Their family is very involved in Rahan Comhaltas and the children along with Caroline are All Ireland sean nós dancers. There were individually wrapped treats, drinks and hot food just for the last night.

“A lot of the food was graciously provided by my mother Mary, auntie Veronica and friends and neighbours. We had a woman named Mariam from the Direct Provision Centre in Marian Hostel join us for some singing which was much appreciated, and some of her friends also joined us. It truly was an amazing send off for Berta.

“Honestly, the experience in a whole has to be one of the most amazing things that I have ever been involved in. It really lifted the spirits of not only everyone involved, but also anyone who tuned in, whether that be on the street or on social media.

“Social Distance Saturdays started on the night of Shine A Light when my dad [Ollie Hughes] asked us to play for that night, and it ended up becoming some sort of tradition almost. If it weren't for our sessions, I honestly don't think I would've been able to be so creative with my music during the summer.

“I learnt so much from it and performance has always been a huge part of my life so if I had to spend six months with no performing, I would've been lost. It has done a great deal for my confidence when performing in front of a crowd. I truly believe that my singing and playing has honestly improved so much from practicing daily and learning new material and that honestly is so much benefit to my future seeing as music is what I want to pursue in college.

“Lastly, I have made some amazing friends through this. I never would've known the Faheys or Berta if it weren't for this experience. Roseanne and Sarah were just girls that my mother knew to me, I never knew them personally, but now its like we're sisters.

“I have so much to be thankful for and even though Covid-19 has brought so much havoc to people's lives, at least it brought people together as it did with the small community we have on O'Moore Street/Cormac Street.”