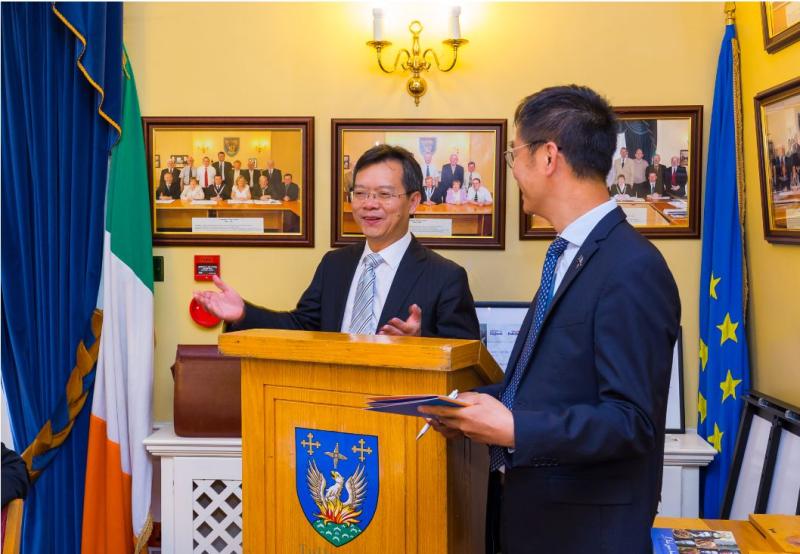 Guo Qing, the Vice Mayor of Luzhou Municipal People's Government, speaking in the Town Hall during his 2018 visit

The donation of 30,000 face masks to the Midland Regional Hospital by Tullamore's twin city in China, Luzhou has been hailed by local councillors.

The masks will help frontline staff combatting Covid-19 pointed out Cllr Tony McCormack, at this month's meeting of the Municpal District, praising Director of Services, Tom Shanahan for his role in the development.

“The Chinese donation is very generous,” said Mr Shanahan who recalled that a delegation from Luzhou visited the town last year and held an official meeting with the council in the Town Hall.

He added: “We will send a letter to the mayor acknowledging the very kind gesture.”

The donation was facilitated by Birr native, Patrick Parsons, eldest son of the Earl and Countess of Rosse who initiated the twin city arrangement between Tullamore, Offaly and Luzhou.

Speaking to the Tribune this week by phone, Mr Parsons, who also holds the hereditary title of Lord Oxmantown, said a comprehensive memorandum of understanding had been agreed between Tullamore and Luzhou. He said he had facilitated a similar agreement between Nottingham in England and the Chinese city previously.

Mr Parsons is married to a native of China and has spent over 20 years living and working in the country.

He added that his family and Birr Castle had links with China stretching back over a century.

Mr Parsons outlined that Luzhou was famous in China for the production of an alcoholic spirit, Luzhou Laojiao, similiar to the Offaly county town's association with the Tullamore D.E.W. whiskey brand.

Speaking during the formal meeting at the time, Mr Parsons said, he chose Luzhou because he felt it was a ''good match'' for Tullamore. ''China is looking very much to develop business relationships with Ireland and Tullamore has a lot to offer. So I hope there will be good business opportunities. If we have a twinning, I think it will help focus the attention and it will be putting Tullamore far ahead in Ireland as a place to do business with,'' commented Mr Parsons.

Barry Cowen thanked Mr Parsons for his foresight in bringing the delegation to Tullamore. He said it was important ''to explore the potential that may exist and that is there to be tapped into in relation to our two jurisdictions.''

Cllr Danny Owens echoed what Deputy Cowen said, saying, it was a ''huge opportunity'' with ''massive potential,'' in the area of business and tourism. ''I would encourage everyone to put their heads together and try and explore all the possibilities,'' he urged.

Vice Mayor, Guo Qing, told those present that ''Chinese people do not have much knowledge of Ireland. So for us, Ireland is a mystery and we need more knowledge.''