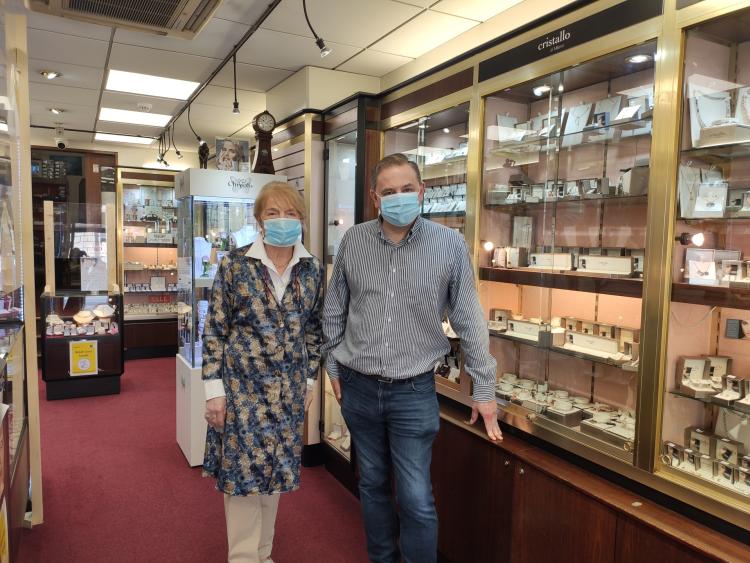 Mother and son Maura and John Douglas are glad to be back at work following the Covid lockdown.

LOCAL shops are now reopened around three weeks following the Covid-19 lock down.

Most of the retailers reopened on June 8 having been closed since March 14, which was a long time to be out of business.

John Douglas, of J&M Douglas Jewellers at Bridge Street, Tullamore said he and his mother are glad to be back to work. But John wasn't exactly idle while the shop was closed in fact he and his partner gave birth to a baby boy they called Matthew Jack. So he had plenty to keep him busy during the lockdown.

However, now that things have returned to what is the 'new normal' how is business?

''We are tipping away, there seems to be a lot of positivity around. The town looks fabulous. It just goes to show we were all concerned about the street works but then something worse came along,'' said John.

John, like all other retail outlets has had to install counter units, sanitisers and screens which he said were very expensive. He availed of the restart grant to help cover the costs of the changes.

He said the most important thing was to get back to work especially for his mother Maura who has been behind the counter at J&M Douglas for the past 50 years. ''And then to have nothing for three months, was very difficult for her,'' added John.

''People are still fearful of spending money, but it has been busy for us. We have to be positive,'' he concluded.