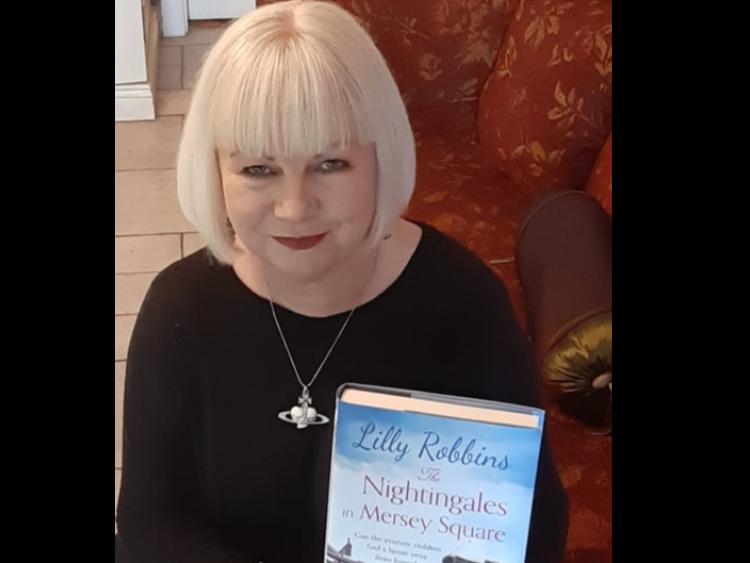 Geraldine O'Neil with a copy of her latest novel

READERS will be delighted to hear that Geraldine O’Neill’s 15th book - The Nightingales in Mersey Square is now available in local bookshops and online at Amazon.co.uk in hardback, paperback and on Kindle.

Whilst every one of her books tell a different story, the big difference this time is that Geraldine is writing under the pen-name of Lilly Robbins. The reason for this change is that she has moved into a slightly different genre as her book is set during WW2 in Stockport in Manchester.

Geraldine reassures us that apart from the setting, there is no huge difference in her writing style and that the reviews from her regular readers state that it is one of her best books to date! And, as always, Geraldine champions County Offaly in her book, as one of the main characters is a nurse from Tullamore. Once again the Faithful County is put uniquely on the world literary map, introducing it to readers all over the globe.

Geraldine tells us that during her recent research for her book, set during the second war, she discovered how Stockport had hosted the Guernsey Evacuee families, and the idea for 'The Nightingales in Mersey Square' was then born.

She explains that she became drawn into the Guernsey Islanders’ dramatic story, shocked at how they were given so little warning about the Nazi invasion, and how they had to suddenly say goodbye to their children, not knowing if they would ever see them again. As it turned out, it would be five years before they were reunited, and for the first two years there was no contact allowed and the families did not know if their loved ones were dead or alive.

Geraldine describes how the pupils and their teachers left the Island in the early hours of the morning, along with children under five who were accompanied by their mothers. Some of the families had little time to gather their belongings together before they found themselves on boats which were used for carrying cattle and coal, and the journey under the cover of darkness was difficult and frightening.

When they arrived in England, the families and schoolchildren were then dispersed to various parts of the UK. Twelve hundred eventually arrived by train in Stockport Town, which is famous for its mills and hat factories. There were no trains in Guernsey, so it was the first time many of the children had seen what they described as these ‘huge, metal monsters with steam coming out of them,’ and they were terrified to board them.

The story describes how they were welcomed to safety in Stockport Town Hall, where groups from the various churches and local community were there to greet them, and help them in any way they could. The main characters - trainee nurses Clare and Gaye - immediately volunteer to help the evacuees settle in Stockport town, alongside their new, privileged friend, Diana, who works in the local parachute factory.

When things get tough, the friendship forged during an air raid in the Plaza Cinema will be the glue that holds three young women together during the turbulent years of the Second World War.

“There are two storylines running through the book,” Geraldine explains. “One uses historical fact to tell the story of the many Guernsey families whose lives were saved by the welcoming, supportive people of Stockport. The other, personal one, focusses on Clare, Gaye and Diana, who are each struggling with their own different paths in life, yet still banded together by their rock-solid friendship.

As with all her books, Geraldine spent a lot of time studying the war details and the culture of the local people who came from many different backgrounds, classes and religions. She was heartened to see how the Stockport people pulled together for the greater good, helping each other during a time when fear and tragedy was a daily norm. Stockport is also a special place for Geraldine as it is town where her husband, Mike Brosnahan, was born and grew up in, and where the family happily lived for seven years, before moving to Ireland. Geraldine also taught in a local school in Stockport, and found her love for writing there when she joined a local Writers’ Group.

During her meticulous research, Geraldine visited and studied Stockport’s famous Air Raid Shelter Tunnels which is now a fantastic museum. Hidden deep underground, they were at one time the largest civilian air raid shelters in the country and were built to hold up to 3,850. It is hard to imagine that all those people would crush in together underground, but everyone did as instructed (as we all did during the recent lockdown) and it just became an everyday occurrence.

As with all of Geraldine’s novels, it is filled with a mixture of great characters who experience love and joy, fun and laughter mixed with war-time separation, loss and tragedy.

The Nightingales of Mersey Square has received high praise in reviews from fans on Amazon etc., already, and in newspaper articles. A recent Northern England newspaper review had this to say – “Romance fans are going to fall in love with this heart-warming saga from Lilly Robbins (Geraldine O’Neill) who has woven the fascinating wartime history of her husband’s home town into a story brimming with drama and passion.

Fans of Geraldine’s books will certainly not be disappointed with this debut novel published under her pseudonym, Lilly Robbins!