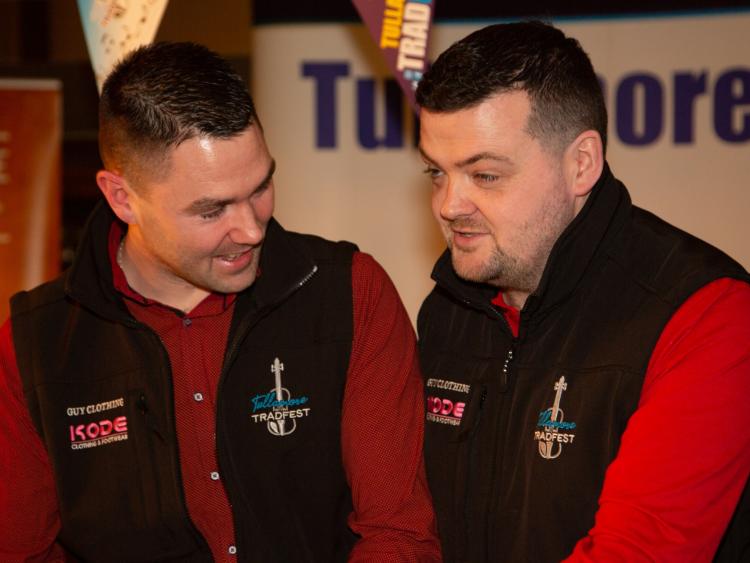 Damien Kearns and Tradfest Chairman Tommy Craven checking everything is in order before the launch of Tradfest 2020.

CYNICS who thought last year's inaugural Tullamore TradFest “would be a flash in the pan” have been proved dramatically wrong.

That's according to TradFest organising committee chairman, Tommy Craven who said the festival is back bigger and better this April.

He revealed that a whopping €1200 worth of tickets had already been sold for festival events with tickets buyers scattered across Ireland and the world.

“Tullamore TradFest is set to establish itself as the biggest festival in Tullamore,” predicted Tommy at the official launch of the event in the Tullamore D.E.W. Visitor Centre this week.

This year's TradFest takes place from Friday, April 3 to Sunday, April 5 and a host of new events have been organised to complement last year's successful attractions.

MC for proceedings and committee member Damien Kearns said the festival “provided a platform to showcase traditional music in Tullamore in a non-competitive environment.”

Paul Bell, Chairman of Tullamore Vintners who are supporting the festival, spoke passionately about Tullamore and its future and said it was great to see Tullamore TradFest taking place for the second year in succession as there hasn’t been a regular festival in Tullamore in recent times.

Tullamore Chamber of Commerce President, Roger Guiney stated that it was great to see the festival growing and that as a town on the cusp of recovery, an influx of people to Tullamore was always welcome to provide a commercial boost.

He said he enjoyed some of the sessions last year and looked forward to enjoying more of the same this year.

See full story and programme of events for Tradfest 2020 in this week's Tullamore Tribune.