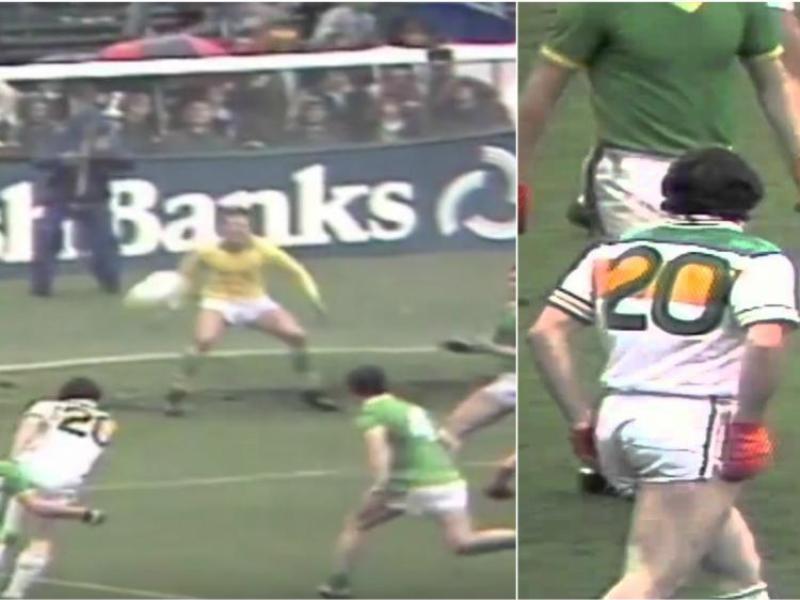 Offaly's historic victory in the 1982 All Ireland Final over the all conquering Kerry side is to feature in a new documentary that is part of RTE's Christmas programming schedule.

The programme, Players of the Faithful, will show how, in 1982, the greatest team in GAA history travelled from the Kingdom to Croke Park with immortality in their hands. Gaelic Football's 5-in-a-row had never been done before and the whole country was ready to applaud the Kerry procession. But Offaly had other plans and the rest, as they say, is history.

The programme is a chance to experience the story of the least fancied team to ever win an All-Ireland football title, a team that came from nowhere to upset the odds when Seamus Darby scored the most famous goal in GAA history sending shockwaves through Irish sport.

Mrs Brown’s Boys is back with two brand new episodes, airing on Christmas Day and New Year’s Eve which will see Agnes invite Winnie to stay when her house is flooded and Buster revealing some big news.

Over on RTÉ2 on Christmas Eve, with their TV destroyed and being held at gun point, we see the hilarious Bridget and Eamon recreating a popular TV show to stay alive. And the nation’s favourite feckless rogues get festive, for a slice of celebrity roasting and a dollop of music, sprinkled with some good old-fashioned, moderate abuse on The Podge and Rodge Show.

In a first for this Christmas, RTÉjr and RTÉ One will air a specially commissioned panto for all the family. Written by Karl Spain and featuring RTÉjr stars and some special guests, including Teresa Mannion and Rosemary Smith, The Greatest Show That Never Was, was recorded in front of a live audience of 500 kids and their parents in the Tommy Leddy Theatre in Drogheda.

Also in the line-up of RTÉjr Christmas crackers this year is the world premiere ofHopscotch and the Christmas Tree. This tale tells the charming story of a happy little horse called Hopscotch and her animal friends Carlo, Barbara, Jules, Malcolm and Ingrid as they set out to find the perfect Christmas tree in preparation for a party and the arrival of a very special guest. We also have two brand new animated shorts for Christmas called Near Myths and Pins & Needles, and will also be broadcasting the wonderful Irish language short Béirén Beag Buí, a film about a small yellow bear and the magical world of dreams between sleep and waking.

A cast of celebrities will be stepping away from their day jobs and be put through their paces in some gruelling challenges. The winning celebrity and their family will receive €10,000 for their chosen charity and a chance to call themselves the coveted first winners of Ireland’s Fittest Family – Celebrity Special. Donncha is coaching actress Norma Sheehan and her family, Davy will push 2FM’s Keith Walsh and his clan to their limit and ensure they are tough competition, Derval hopes to be victorious with the young singers Sean and Conor Price, and Anna is putting all her experience into guiding Dancing with the Stars judge Brian Redmond and his family.

Sit down with the whole family to enjoy a festive and snow-filled episode of The Zoo Winter Special. In this hour-long episode, viewers will see what happens when zookeepers are faced with one of their greatest challenges yet: making sure the animals they love are kept warm, fed and cared for during the Beast from the East that hit Ireland this year.

Fair City fans can look forward to an hour-long special of their favourite soap on Christmas day. There's fun in the Collins household as they prepare for their first festive season in Carrigstown, Robbie makes a startling request to Carol, Decco finds an unlikely ally on his first Christmas without Kerri-Ann, and as Melanie's difficulties  grow, Alex gets nearer to the devastating truth. And over on Albert Square at least one person is left with blood on their hands this Christmas, as Eastenders takes us through to a New Year that kicks off in dramatic style.

On Carols from the Castle on Christmas Eve, Mary Kennedy brings Christmas magic into every home with a special evening of festive music, old and new, from the magnificently decked halls of Dublin Castle. The RTÉ Concert Orchestra are joined by a wide range of performers including Johnny Logan, Bray trio Wyvern Lingo, who collaborate with legendary Dubliner John Sheahan and fellow fiddler Colm Mac Con Iomaire on the gorgeous Wexford Carol and The Lost Brothers who apply their beautiful harmonies to dreams of a White Christmas.

Also for music lovers is a documentary telling the story behind the 1982 making of Old Town, one of Phil Lynott’s most loved songs with an iconic promo video made exclusively for RTÉ.

Pat Shortt’s Christmas Music from D’Tellypresents a selection of festive favorites from over 50 years of RTÉ Archive, featuring a wide variety of Christmas jollies including offerings from St. Patrick's Cathedral Choir accompanied by the James Last Orchestra, The Corrs, Colm Wilkinson, Anuanna, Jerry Lee Lewis and Dolores O'Riordan. And in an hour long Other Voices special recorded in the beautiful setting of St. Michael's Church, Ballina, Villagers treat us to a wonderful career spanning set.

Other documentaries this season include Life after the Rising, presented by the acclaimed social historian and archivist Catriona Crowe, which will feature a mixture of engaging interviews with historical experts, archive footage and personal stories from the time.

Pope Francis in Ireland: Behind the Scenes goes behind the scenes with those tasked with making the Papal Visit a success, against all the odds. Through the eyes of the clergy, the event managers, the volunteers and the Gardaí, the viewer will experience the planning, the resistance, the obstacles and emotions associated with this momentous Papal visit. RTÉ pays homage to Chester Beatty– Honorary Irishman, as 2018 marks the 50th anniversary of the death of the man who was responsible for the finest private collection of manuscripts, books and artefacts amassed in the 20th century. This compelling documentary offers a unique insight into the man, his amazing collection, and the work that goes into preserving it.

Elsewhere in sport, Darragh Maloney and Joanne Cantwell present The RTÉ Sport Awards 2018 live from Studio 4 in RTÉ, broadcast on RTÉ One. After a carnival summer of epic hurling Summer of Hurling looks back at the 10 best games as shown on The Sunday Game Live beginning on Day 1 with Dublin and Kilkenny in Parnell Park and leading all the way to Croke Park and the All-Ireland Final between Limerick and Galway. Each show will be a mix of extended highlights, studio chat pre-match and post, as well as some feature packages as RTÉ reflects on the glory that was Championship 2018.

Join Peter Collins and Jacqui Hurley on RTÉ2 with live coverage of the Semi-Finals and Final of the FIFA Club World Cup from the UAE. Can Real Madrid defend their title? Watch the games on 18, 19 and 22 December.

Racing from Leopardstown is a firmly established Christmas tradition. Tune into RTÉ2 for four days of top quality festive fare, with seven Grade 1 races, the cream of Ireland's top horses and a total prize money of €1.4 million.

What would seasonal television be without our Christmas centre piece of RTÉ cookery staples? Rory O’Connell and his sister Darina Allen are back together again for the return of their mouth-watering popular Christmas two-part programme, A Simply Delicious Christmas. Sample Donal's Meals in Minutes, where the star of the show walks us through five festive recipes.  And if that’s not enough, whet your palette and watch Neven Maguire spread some festive cheer in his scrumptious two-part Christmas programme, Neven's Kilkenny Christmas.

As the clock ticks towards 2019, Keith Barry's Magical New Year Party has a star-studded cast of guests, with music from Kodaline, The Stunning, The Academic and more. The show will also feature one of the most daring feats of escapology ever seen on Irish television. Guests include Barry Keoghan, Eamon Dunphy, Roz Purcell, Joanne O’Riordain, Tony and Erin McGregor, Kevin McGahern, Denise McCormack and Mario Rosenstock. Following that RTÉ will go live to the countdown concert from Custom House Quay where Gavin James will count in the New Year.

RTÉ will also be unwrapping plenty of new series in early January, including the hotly anticipated return of Dancing with the Stars, the celebrities on which are being revealed this week.

Brand new drama Resistance, set during the War of Independence and starring Brian Gleeson, Simone Kirby, Natasha O’Keeffe, Michael Ford-Fitzgerald and Jordanne Jones, follows our characters as they fight for their lives and their future. And there’s new series of the nation’s favourites Operation  Transformation – with new expert Dr Sumi Dunne joining the team - plus RTÉ2’s much-loved First Dates.