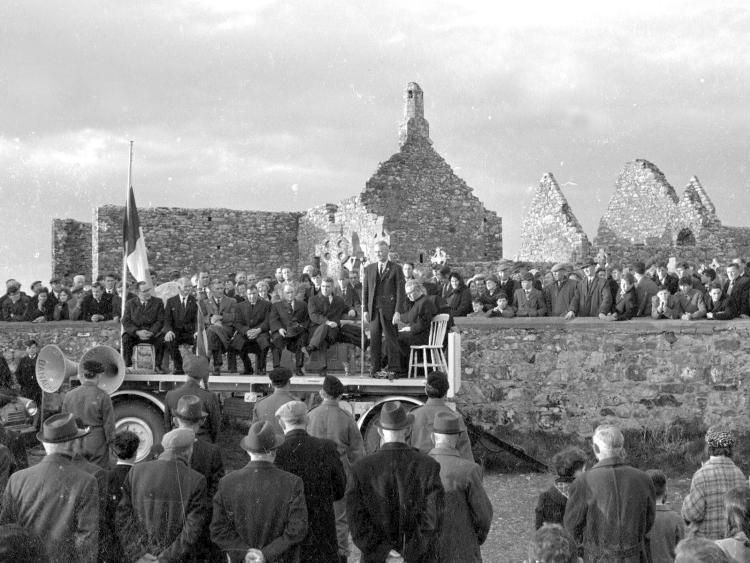 Photo caption: Alf Murray, then President of the GAA, at the 1966 commemoration in Clonmacnoise.

At 2pm on Sunday, October 30 there will be an event at Clonmacnoise to remember James Kenny, Kieran Kenny and Paddy McDonnell, three men from Offaly who were involved in the 1916 Rising and are buried in Clonmacnoise.

In 1966, the fiftieth anniversary of the 1916 Rising, many events were organized around the country. As part of their contribution, Offaly GAA, with the assistance of the OPW, erected a Commemorative Plaque near the entrance to Clonmacnoise honouring the three 1916 veterans buried there. Two of the men were members of the GAA.  After Mass, in 1966, wreaths were laid on the graves and following the unveiling of the Plaque Mr. Alf Murray, President of the GAA gave an oration.

The Centenary Year Commemorations are being coordinated by Offaly County Council.  Offaly County Council has worked with the Office of Public Works over the recent months and the Plaque in Clonmacnoise has been re-erected in a very prominent and will honour the memory of the men for many years to come.

All are invited to attend the event on Sunday, 30th October in Clonmacnoise.  The event will open with an introduction in the Visitor Centre by Padraig Heavin, the Plaque will be un-veiled and this will be followed by an oration. Wreaths will be laid on the graves of each Veteran by members of their families.