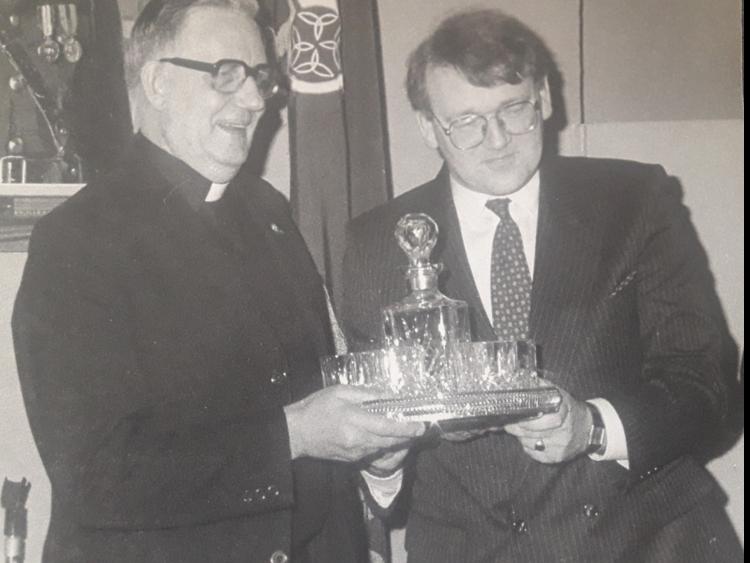 IN terms of his overall life story, the many fine things achieved and the widespread legacy he leaves behind, the GAA actually played a somewhat brief, almost peripheral role for Fr Tom Scully. He may have remained a passionate GAA fan throughout a long life that was lived to the full but his hands on involvement was over almost in the blink of an eye.

Yet the GAA is the thing that Fr Tom Scully is remembered primarily for in his beloved native Offaly. He did one year as Offaly senior football manager, 1969 and while his contribution to what happened just two years later should not be overstated, it was nonetheless hugely influential and has been widely acknowledged by players from that golden era.

Under his watch, Offaly lost to Kerry in both the All-Ireland Senior Football Championship and National Football League finals – it was a bitter double whammy, a most distasteful pill to have to swallow but it was a very important stepping stone for that young team. The lessons they learnt in that year and in 1970 when they surrendered a huge half time lead as they lost to Meath in the Leinster final were to serve them very well as they won the All-Ireland Senior Football Championship for the first time in 1971 and retained it a year later.

Fr Tom Scully took over as Offaly manager during a time of great optimism and expectations for the county. It was a tremendous time for Offaly football – they had won their first Leinster senior football title in 1960 and reached the All-Ireland final for the first time in 1961, edged out by Down in a legendary decider in front of a record attendance in Croke Park.

After that there was a hiatus at senior level for a few years but tremendous work was taking place at underage level. They won the Leinster Minor Football Championship in 1960, 1962, 1964 and 1965 – and the coup-de-grace came in 1964 when they won the All-Ireland minor football title for the first and only time, defeating Cork in a drama packed decider.

As many of those young heroes were bedded in with stalwarts from 1960 and 1961, Offaly football supporters had great hope but there was plenty of disappointment along the way, tough defeats that helped to build character and instil the fortitude that helped them reach the promised land within a few years.

In 1967, Offaly were pipped by Meath in the Leinster final while their 1968 defeat by neighbours Laois in the Leinster semi-final was a hard blow to take – not only was it against great local rivals but it was also a fairly comprehensive 0-11 to 0-6 reverse. In 1969, the wheel began to turn as Offaly won Leinster with wins over Westmeath, Wexford and Kildare. Cavan were dispatched in a replayed All-Ireland semi-final but the final against Kerry proved a bridge too far as they lost by 0-10 to 0-7.

That was a tough, dour, uncompromising game of football and it did not leave many lasting memories for neutrals but for Offaly, they took the hard lessons on board. Without playing well, Offaly had their chances to win with a couple of particularly good goal openings and within two years they were the finished product, a team in their prime with the confidence to match.

In 1969, Offaly were still a team in transition – they had the famed 1960, 1961 full back line of Paddy McCormack, Greg Hughes and Johnny Egan. The 1964 All-Ireland minor champions were represented by Martin Furlong, Eugene Mulligan, Mick Ryan, Willie Bryan and Tony McTague while there was a smattering of players from the earlier minor teams. When Offaly won in 1971, Furlong, McCormack, Nick Clavin, Ryan, Bryan, McTague, Sean Cooney and Sean Evans were there from the team defeated in ‘69 while Larry Coughlan was a teak tougher corner back on the 1972 side that trounced Kerry in a replayed final.

There had been controversy before the final in 1969 when team captain, Pat Monaghan from Ballycumber was left off the team, and John Egan was the captain on the day – Monaghan had played at corner forward in the replay win over Cavan and his place went to Sean Kilroy of St Carthage’s for the final and that controversy was debated for many years afterwards and still crops up now and again.

While Fr Tom Scully went to South Africa on the missions at the end of that year, some Offaly people from that era believe that his services were not wanted by the County Board – he had a close relationship to many of the players and in addition to being a father type figure, he was also a close friend and confidant and some feel this may have been a factor.

Either way, the exact train of events are now confined to history and memories and Fr Tom was replaced by another priest, the Tullamore based Fr Tom Gillooley who guided them to the big successes in 1971 and 1972. There was a huge clerical involvement in Offaly GAA in those years – Fr Edward Vaughan was replaced by Fr John McWey, who was chair in 1971/1972 and after a brief one year term by Tullamore’s Alo Kelly, the then Mucklagh based and now Tullamore, Fr Sean Heaney came in and remained at the helm during a tremendous era for Offaly football and hurling into the mid 1980s.

Fr Tom Scully played a pivotal role in developing the 1971/’72 heroes not only into the footballers that they became but also the men that emerged as they matured and grew up. A very personable and jovial man, he had the great ability to converse and interact with people older than him – at the time, Fr Tom would not have been that much older than some of the elder statesmen on the squad: he did his Leaving Certificate in 1949 and was in his late 80s when he died.

In 1969, football was a very different game than now – it was a traditional kick and catch game and well into the 1960s, huge selection committees picked teams: something that was gone by the end of the decade. Fr Tom was regarded as being ahead of his time, teaching players how to defend properly and encouraging them to play to a plan as well as allowing natural flair and creativity to surface.

He was a good trainer with a great knowledge of the game and Eugene Mulligan, an undisputed All-Star in 1971, recalled: “He was very personal, genuine, honest. He was one of the best trainers I played under. He was the first person I saw showing us how to defend, which was very new at the time. He was a good friend to us.”

The Rhode man was one of a few players based in Dublin at that time and Fr Tom, who was also based in the city, would train them there in the early part of the season before all were expected to travel to Tullamore for collective training as important games loomed into focus – the late John Egan, a great friend of Fr Tom, generally provided the transport for the Dublin based players.

After matches, Fr Tom would enjoy socialising with players and as young people finding their way in the world and encountering all the inevitable experiences of growing up, he was a good man to give beneficial advice – and this was always well received while his devout nature was obvious to all who knew him and enjoyed his company.

The GAA proved to be only one part of Fr Tom’s life. A native of Aharney deep in the Ballinamere GAA Club catchment area, he went to Ballykilmurray National School but then departed for boarding school for second level in Belcamp College and this meant that he never really got involved in his local GAA club. However, he always kept an eye on the Ballinamere club and enjoyed trips home, visiting neighbours and friends – locals remember that he would often come with a block of ice cream, which was a very welcome treat for them.

He had a great faith, a positive outlook on life and his contributions were many and varied. He was immersed in the Offaly Associations in Dublin and London during his time in those cities – he won the person of the year award in schemes organised by both Associations. He was a director of the Irish Centre in Camden Town in London for several years – a facility which was a central part of life for many Irish emigrants to London, particularly in the 1960sm, ‘70s and ‘80s and they provided great practical assistance for emigrants as well as a social outlet and chance to meet fellow exiles.

An Oblate priest, he was bitterly disappointed to learn of a bitter split in the Offaly Association in London in the 2000s, which resulted in two rival organisations being in existence at the same time for a number of years with both having dinner dances. He attempted to broker a mediation between the warring parties but unfortunately, it did not have a successful conclusion.

A maths teacher in Belcamp College from 1956 until 1970, it was here that he really developed his interest in the GAA – he coached football, hurling and basketball teams and had a major influence on several top class footballers who went through Belcamp.

After a brief stint in South Africa, he took a role as Irish chaplain in Manchester, again immersing himself in the exiled community as well as becoming secretary of the Lancanshire GAA County Board. He returned to Dublin as parish priest of Bluebell in 1980, went to London in 1986 and has been back in Ireland for several years now.

While he spent far more of his life outside Offaly than inside it, his passion and commitment to his native county never left him. He remained in close contact with many of the players from the 1960s/1970s and while in ill health in recent years, he visited some of them when he could – memorably paying a visit to Paddy McCormack in Rhode after he celebrated his 80th birthday in the past couple of years.

Survived by his sisters Nance Hanlon, Mary Garry, Rose Cleary, Margaret Henry and Lily MacDonald, brothers Ned and Michael and extended families, a memorial Mass will be celebrated for the repose of his soul once the coronavirus restrictions are over and no doubt, there will be a big Offaly GAA contingent there to pay him tribute.