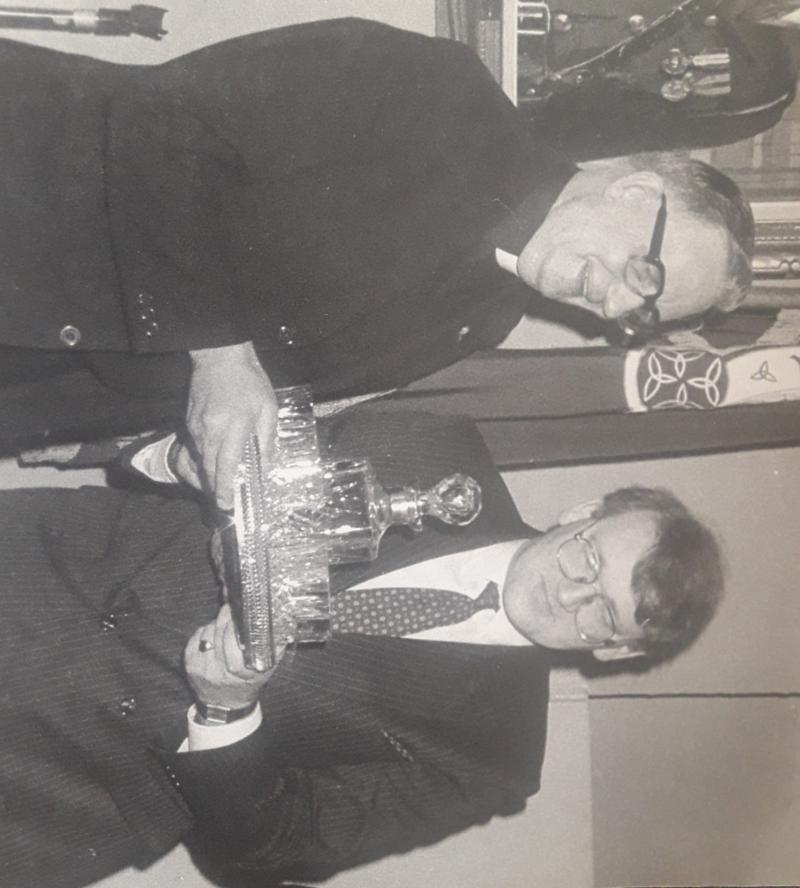 Fr Scully, a former manager of the Offaly senior football team and recipient of the Offaly Person of the Year awards from both the Dublin and London Offaly Associations, had been ill for the past week.

“He was in very positive spirits right up the end,” a close friend of the deceased, Tullamore business man, Paul Galvin told the Tribune yesterday [Tuesday].

Renowned for his warm personality, positive outlook on life and broad smile, Fr Scully had been Director of the Irish Centre in London's Camden town for many years, a facility which provides help and advice to Irish emigrants.

Leinster GAA Chairperson and former Chairperson of Offaly Association, Dublin, Pat Teehan, described Fr Tom as one of the most magnificent individuals he had the pleasure of meeting.

“He left an indelible mark on society, whether through his teaching, ministry, as Director of the Irish Centre in Camden Town or as Manager of the Offaly Senior Football team,” said Mr Teehan.

“Whenever you met him he oozed positivity, with his broad smile, warm handshake and optimistic outlook on life.  The last time I met him was at the funeral Mass of former Offaly footballer, John Egan in Multyfarnham a couple of years ago and despite his fading eyesight and diminishing health he was still the same Fr Tom that I first met 35 years previous.  He was a marvellous priest, a tremendous Offaly man but above all a wonderfully warm human being.”

In a recent interview in the Irish Examiner, former Offaly senior footballer, Willie Bryan recalled Fr Scully's term as manager of the team in the lead up to the 1969 All-Ireland final where they lost to Kerry.

“He is a really lovely human being. He used to give a few of us a loan of his car. He gave it to us once when we were going to the wedding of one of the lads on the team — Mick Ryan. We headed off to Athlone, drank pints and pints. Then we brought the car back to his house intact — he then dropped us back into town for more pints. But he treated us like adults and he knew we were totally committed,” outlined Mr Bryan.

Liam Fleury, former Chairman of the Offaly Association [Dublin], also paid tribute to Fr Scully and said the Association organised a surprise party in his honour 20 years ago in Johnny Egan's hotel, the Maple on Iona Road. The Offaly 1969 football team attended on the night to honour Fr Scully.

“The stars of the Belcamp teams of his era, including Pat Griffin, Johnny O'Connor, the Carew brothers and Frank Cummins were also there. Frank Cummins said to me that Fr Tom had been the biggest influence on his football career,” recalled Mr Fleury.

Born in Tullamore, Fr Scully was educated locally at Ballinamere N.S. before attending Belcamp College where in 1949 he obtained an honours Leaving Certificate.

He furthered his studies at University College Dublin until 1952 and in 1955 he was ordained a priest with the Oblate Fathers.

Following his ordination, he returned to UCD where, in 1956, he received a Higher Diploma in Mathematics. He was assigned to Belcamp Colege where he taught maths until his departure in 1970.

During his time teaching he became involved in sport and coached the hurling, football and basketball teams at Belcamp.

During that period he was appointed coach to the Offaly senior football team and success came immediately as they qualified for their first ever League final only to suffer defeat at the hands of Kerry.

Later that year Offaly won their third Leinster title and reached their second All-Ireland final only to see defeat again at the hands of the Kingdom.

Fr Scully instilled the never say die spirit then characteristic of Offaly football and it could be said that he was one of those responsible for the purple patch enjoyed in the 70s and early 80s.

Unfortunately for Offaly football, Fr Scully was transferred to South Africa where he spent the next year teaching. On his return he was appointed Irish chaplain in Manchester and continued his involvement in the GAA there becoming Secretary of the Lancashire County Board.

He continued his pastoral work in England before returning to Ireland in 1980 when he was appointed parish priest of Bluebell in Dublin.

He remained there until 1986 when he was appointed director of the Irish Centre in London, at a time of high emigration from Ireland.

Fr Scully's funeral arrangements were not available at the time of going to press but they will be subject to Covid-19 restrictions.

To his family, religious order and a wide circle of friends the deepest sympathy is extended.